The premiere of Sadie Dupuis’s new video and a chat about identity. 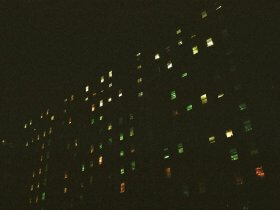 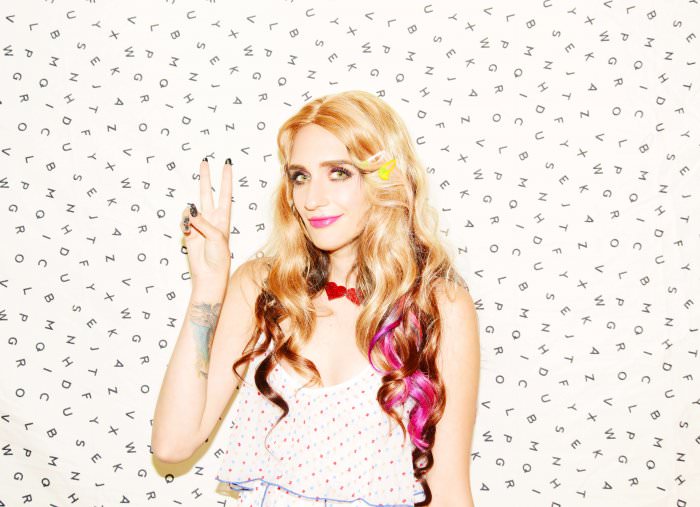 Sad13 is the solo venture of musician Sadie Dupuis, the frontperson for the band Speedy Ortiz. Sadie’s new album, Slugger, pokes fun at the idea that an individual has to be one thing, rather than contain multitudes.

I recently chatted with Sadie about creative control, the freedom in having a space that’s just yours, and the makeup trends that inspired the video for “<2" (translation: "Less Than 2").

SADIE DUPUIS: Well, the writing of the material was actually remarkably similar. All of the Speedy demos start as a demo I record at home, and I add way too many tracks to it. The big difference is that when I bring it to my bandmates in Speedy, we have to re-contextualize it to play it live. The songs wind up becoming pretty different from the demos. Like, all the Speedy Ortiz demos will have tons of synths all over them, and trigger drums, and drum machines, and that doesn’t wind up on the records because we rearrange it similar to how we play it live. [With Sad13,] I just let these be the demos. The way I write music is usually by home recording. I’ll open Garageband, and I might have the guitar part I want and the tempo. I’ll just record that and start adding things to it. The big difference here is that I was writing while making these demos, and I just didn’t bring them to the other people.

Totally! I read that you said working on stuff for Sad13 was like “exorcising your control-freak demons.” Does having independence versus collaborators also influence your songwriting process?

I wouldn’t say that the songwriting changes so much, but playing things live with other people gives you a sense of what’s working and what’s not working. I trust my bandmates’ taste immensely, and they’re a very good testing ground for whether the song is doing what I want it to do. Plus, when I make demos, I’ll record either myself playing drums badly or the machine drums, and I’ll record bass parts. Sometimes they’ll keep some ideas from the demos but they’ll make them better.

So, you just moved to Philadelphia at the beginning of 2016, right?

I moved here in January for a few weeks and then I got my own place in March.

Nice! Has the change of location has changed your creative work?

Well, one thing is that I’m very inspired by a lot of the musicians who live in Philadelphia, which is sort of why I came here. When I first moved to Massachusetts in 2011, part of the reason I wanted to go there was because I liked so many bands in the punk scene in Boston and Northampton. A lot of the bands there that I’d moved to see have broken up or moved away. That’s what happens! Boston’s become so expensive in the past few years, whereas Philadelphia is still quite affordable. A lot of my favorite bands and artists reside here now. Being able to go out most nights, there’ll be a house show and I’ll find out two of my favorite bands are already playing and I’ll find three great bands I love and that’s certainly exciting and inspiring as a writer. Another big difference is that I’m now living by myself, which is something I haven’t done in a few years. I think as a creative person I do better work when no one else is around, because I’m not worried about waking someone else at 5 AM with tracking a bass part, or something. That’s been the other big difference.

You co-wrote and co-directed the “<2” video, right?

Have you done that before for any of the Speedy Ortiz videos?

Generally for the Speedy videos we come up with the concept as a band, and then bring it to somebody else. I’m so involved in every other aspect of the business of Speedy Ortiz. Two of my other bandmates in particular have a background in film stuff, so they usually take the lead on that. But I guess this is the most involved I’ve been. I knew what I wanted the video to be, and I had a rough shot list and a treatment written out. I approached my friend Catherine who co-directed it and edited it, and asked her to make it with me. That was a first for me.

It’s such a fun video!

I had so much fun making it, really.

What was the importance of doing so many looks and identities through the video?

Well, I think a lot of the idea of the song is about not compromising between seemingly conflicting identities that might be housed in a person. Often when people view your identities as conflicting, it’s because of incorrect assumptions about how a person’s physical identity should impact their personality. Obviously there’s a correlation between the themes of the song and the idea of creating the video, but also I just love wearing wigs. Catherine and I found a great beauty supply shop that’s underneath a train station in Philly. I should preface this by saying I’m a wig fan—I buy a lot of wigs from Japan and on Etsy, but they’re expensive. We found this cool, inexpensive place. I hadn’t spent an enormous amount of time watching YouTube makeup tutorials before, despite having a very amateur interest in cosmetics. I got really deep into the hole of watching YouTube makeup tutorials. They’re really funny, and some of them are really strange, especially the different contouring types. Some of the things in the video are just visual puns—like bagel head is [a body modification trend] where silicon is injected into someone’s forehead so that it’s shaped like a circle. Hangover makeup is another makeup trend where you have too much blush [under your eyes], but we took it literally. I asked the makeup artist Paige Campbell, who’s awesome, to make me look like absolute shit. I wanted it to look like I was up all night weeping with a bottle of wine. Some of them we did literally based on the names, but some we just actually did the makeup, like the rainbow freckles. ♦