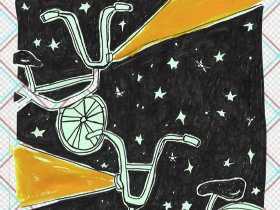 A Guide to Understanding the Multiverse 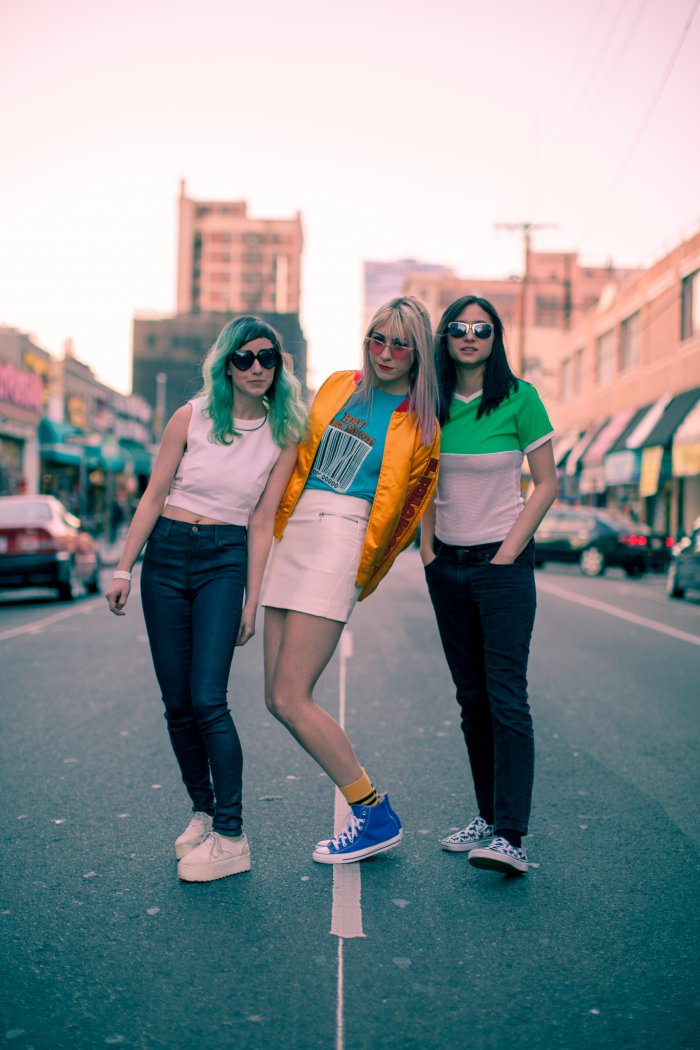 Ally Einbinder, Abby Weems, and Victoria Mandanas have been best friends since they formed Potty Mouth five years ago at Smith College. Ally, Potty Mouth’s bassist, told me that the band didn’t start out with any big ideas for what they’d become, but that each member knew she wanted to play music with other women—not for the sake of aligning with any movement or genre, but for the sake of having an incredible support system. Since then, Potty Mouth has released two EPs and a 2013 full-length debut Hell Bent. They’ve toured extensively, and fine-tuned their songwriting process and sound. They also recently moved across the country from their longtime home base in Massachusetts to Los Angeles, where Ally, Abby, and Victoria now live together in the same apartment.

Their new video for “The Bomb,” a standout track from last summer’s Cherry Picking EP, features projections of blooming flowers, fireworks, starry night skies, jellyfish tentacles, and more beauty layered over their performance of the explosive anthem. Take a look:

This fall Potty Mouth will embark on a tour with Against Me! (They say they couldn’t be more excited to hang out with Laura Jane Grace.) Last week, I talked to the band about feeling at home in a new place, supporting your friends, meeting your idols, and steering clear of big egos.

KATE LEIB: Your new video is cool! I wanted to start out by talking a bit about “The Bomb,” how it came to be, and what kinds of emotions were behind the lyrics?

ABBY WEEMS: I wrote that song in Seattle, and that might’ve been the first time I’d been to and spent time in Seattle. I really love it there, and I felt really at home there. The song started from a place where I was like, “Wow, I’ve never had the time to really spend time somewhere where I would actually consider moving. I feel really at home here.” Coming from such a small town, you can feel like a little bit of a spectacle, and not really have a lot of privacy. I would go to Whole Foods and run into my parents’ friends, and they would want to know all about my life and what I was up to, and yeah, the song is coming from a place of wanting to find my own space.

I was wondering about the visual aspects of the video as well. There’s a lot of naturalistic imagery in the projections—is that connected to wanting to start again in a new place?

ABBY: The video was done pretty much on the fly, and we wanted to have projections. So once we got to the space, we had to find things that worked and that we could use from the internet. It was very much that we liked the aesthetic of those things and we wanted to use neutral things.

ALLY EINBINDER: Well, we didn’t want the song to be visually interpreted in a literal way. So we didn’t want to literally have projections of bombs. The first idea we had was these natural phenomena, like rain or snow, but then we found the flowers blooming. Something about that is a very similar movement to the idea of a bomb, but it doesn’t have the same violent connotations.

Yeah, it’s calming in a way, especially for a song that’s really high-energy and in your face. It has a Zen sentiment. What does your songwriting process normally look like, and how does everyone contribute to that?

ABBY: It usually starts off with me and my guitar, coming up with a basic riff, and verse-chorus ideas. I’ll usually try to flesh out the lyrics beforehand. If I don’t do that, then I start to overthink it and I just get stuck on it and never finish it. So I try to get everything, like the bulk of the structure, done and then bring it to Ally and Victoria. That’s when hearing it as a band we realize, “Oh, we should start it like this,” or, “This part should be quieter,” or, “Maybe the guitars will drop out for this part.” It’s very collaborative once we start actually working on the dynamics of the songs.

Potty Mouth often cites the band Veruca Salt as a major inspiration and influence. I read that you recently got the chance to work with Nina Gordon and Louise Post on some new material. Will that be on your next record?

ABBY: Yeah, I did work on one song with them. I don’t know if it’ll be on the record because it was a very casual thing where, before we moved out to L.A., I was out here and I sort of got hooked up with them to do some writing in the studio. I already had the song idea in mind, and they were there to coach me through it and help me zero in on the idea for the song. We haven’t visited that song in a while—we don’t even play it live. It’s a song I really love, so maybe we’ll use it for something in the future.

What can we expect on your next album? Will it include songs from your EP from last summer, or will it be entirely new stuff?

ABBY It’s gonna be all new stuff. [Laughs] We’ve been sitting on many songs over the past couple of years. We’re just, like, bursting to get them all out into the world, so we’re not going to repeat anything.

That’s great. You guys played at Lollapalooza this summer. What was that experience like? Any crazy stories?

ABBY: [Laughs] Crazy stories from Lollapalooza? Well, it was weird to hang out in the quote-unquote “Artist Village” that was behind one of the big stages. Everyone had a little cabana, and there was fruity alcohol, and it just really weird to sit on your weird fake porch of your cabana and watch someone from One Direction walk by. I freaked out when I saw Grimes, because we were going to watch Grimes, and we were trying to figure out how to get over to the stage and then she’s standing five feet away from us. I was like “Ah! I can’t even talk about this right now because she’s right here!” It was all a really new experience for us.

Since your first EP back in 2012, have things changed in terms of production, or general dynamics? Have you experienced any obstacles in reaching a larger audience?

ALLY: We’ve been a band for five years, and in that time we’ve all grown as musicians, just by virtue of touring a lot and being together all the time and practicing a lot. We’ve all gotten better at our instruments and better at songwriting and better at knowing what we want. Day one, we started and had literally no real direction or specific ideas. When bands start, usually they have a very specific idea of what they want to achieve, and we didn’t start that way. We were just very loosey-goosey about everything. We didn’t even have a singer picked out; Abby just sort of organically fell into that role. And now five years later, we know our sound. Our sound has really solidified to the point where people can hear one song and say, “Oh wow, this really reminds me of bands like Veruca Salt,” and that feels really good. For a while, people would hear our music and not really get it or not really see beyond the surface level aesthetic of our gender, obviously. For a while, it was all like, “Oh you guys are like Bikini Kill and Sleater-Kinney.” I love those bands, but that’s not what we sound like. So it felt good to really find a sound with time and resources.

We just moved to L.A., and that’s been great. We have access to a studio where we can record. The EP was a step up in production for us. Those are the things that have changed, but besides that we’re still the same Potty Mouth. If anything, we’re even closer friends. We live together now, so we’re literally together all the time. We’re really there for each other. It feels really good. I would not have been able to move out to L.A. alone. We’re friends, but we’re also bandmates, business partners, and family. If anything, that’s just gotten stronger.

That sounds like an amazingly supportive environment, especially when you’re living somewhere as sunny and nice as L.A.! Are you excited to tour with Against Me! this fall?

ABBY: Yeah, it’s been a long time coming. We’ve been social media friends with Laura Jane Grace for a long time now. We’ve actually run into her a few times recently, and one of the times was in Chicago—was it when we were there for Lollapalooza? Yeah—and we were walking down the street and she drove by in her car and was like “Hey, Potty Mouth!” and literally the next day we got the offer to do the tour. So it’s like the stars have finally aligned.

That’s awesome! Do you have a favorite track to play live? Have you been playing any new stuff on tour?

ABBY: We’ve only been playing one new song live, which is called “Smash Hit.” We’re gonna release that song soon, but other than that we usually play the EP songs and a couple of old ones.

What advice would you give to someone who’s just picking up an instrument or trying to find other people to play music with or be in a band with?

ALLY: There’s so much advice I’d want to give. At this point I want to write a book on it. Beware of big egos when seeking out people to play music with. For me, the whole reason I wanted to be in a band like Potty Mouth is that I wanted to be with other women who I felt comfortable with. I wasn’t comfortable with myself as a musician [when] I was just learning bass, and I wanted to be in a band with people who weren’t self-righteous about their position as a musician. And you encounter a lot of that in rock music culture, especially with men. So trust the voice that’s in your head, and realize that there’s literally nothing you can do on your instrument that’s wrong. I’ve never had a lesson in my life, and sometimes I think, Is this how I’m supposed to be playing bass? But it doesn’t matter. It doesn’t matter if you’re doing it “right.” That’s how some of the most original sounds are produced—by figuring it out on your own. ♦