The band’s latest single, plus a chat about not letting yourself or your work be trivialized. 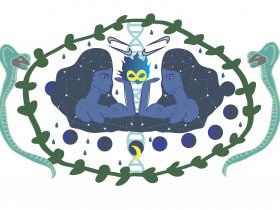 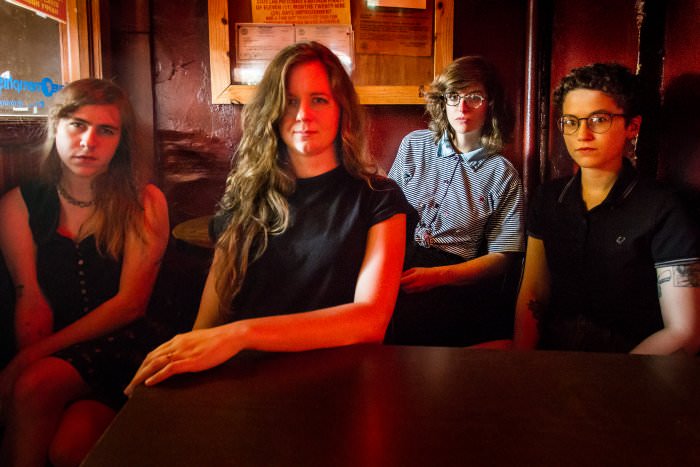 NOTS is a Memphis-based punk band composed of members Natalie Hoffmann, Charlotte Watson, Alexandra Eastburn, and Meredith Lones. In the midst of constant international touring, the band has been hard at work on Cosmetic, their second full-length album. Today we’re premiering their latest single, “No Novelty”—an explosion of vocals and guitar, reminiscent of traditional punk, with spacey synths:

Earlier this week, I had a chance to chat with lead singer and guitarist Natalie about the upcoming album Cosmetics, collaging, and the importance of female friendship.

ANNA WHITE: I’ve been listening to you guys’ new album and your old album, and I like them both, but I can hear a difference. How has your sound evolved between Cosmetic and your previous album, We Are NOTS?

NATALIE HOFFMANN: All right, yeah! Well, I think the biggest difference for us is that we’ve worked together longer. At the time we were writing the album, we had been on tour on and off for about a year, and I think that we wrote songs in a lot of different ways. Some of them we wrote on stage. We would just play whatever came to mind in between songs, and this eventually turned into actual songs for the album. A lot of them were written here in Memphis at our practice space—we practice in a storage unit.

It’s interesting, to say the least, but it gives us a lot of freedom to play any time at night, which is helpful because we all work. We would go up there and just start playing and experimenting to see what we liked and turn those into song structures. I would actually record versions of those to work on later for songs. I think we all got a lot more patient, too, in a way.

Yeah, we wrote a lot of songs! “No Novelty” is actually one I wrote at home on the bass, where I wrote the main and then I showed it to the bass player and she wrote another part. Then I wrote a guitar part and it all kind of fell together—the drummer actually played synth on that song, too. It was cool to be able to get her part recorded.

Definitely! The synth is a stand out part of the song, and really this whole album. It’s really unique.

Yeah! Alexandra, our synth player, joined us for the first album. She wasn’t on any of our singles up until then. We wanted to add something to the band, and we thought she would be a good fit, because she’s a fantastic person and because she has a good ear for music. She’d actually never played synth before she played with us.

Really! That’s wild, I never would have guessed from hearing her play.

Yeah, she has a really interesting approach to it, which I think is good for us.

What was “No Novelty” inspired by?

I actually wrote the words down in an old notebook of mine when we were on tour. I was feeling really frustrated about all-female bands, or really just anyone you wouldn’t traditionally see on stage playing music and being treated as a novelty act and trivialized in that way, which I thought was a terrible thing. So those words came from that. [With] the rest of the lyrics, I was thinking about how when you watch the news, even serious, serious topics such as death or people in other countries being bombed by the United States, get trivialized and made into entertainment in a really bad way. I wanted to address that in the lyrics of the verse as well, and how that’s something we should all be aware of. We should remember that the images we see on the screen are people, and their lives are being horribly altered and that should never be forgotten just because the news cycle is so set on making things sensational and forgetting that there are people involved.

You said you’ve been touring a lot recently. Has that impacted how you put together this album versus We Are NOTS?

Yeah, certainly. Like I said, on tour, playing a show every night, you start to realize how you want your set to fit together, and what would make the whole experience of you performing better. We realized we liked to start the set and then immerse the audience in it for the whole time, to keep a lot of noise going between the songs. We like to keep things so you never really leave the moment of being at a show. And through that, some of those noisy parts became their own songs, which is interesting because they happened in such a strange, organic way based on how the crowd was acting or how we were acting. Also, when you tour, you drive so much. It’s so many long drives, and you find yourself really expanding what kind of music you want to listen to. For us, we listened to a bunch of punk music at first and we were really excited, and then we started to feel that tour haze and we would just listen to long psychedelic albums. A lot of the songs are written while I was staring out the window riding in the car, or while I’m driving I’ll be thinking about a song and then I’ll write it down later. So just being on the road and seeing America in such a particular way has had a big effect on all of us.

You guys were also in Europe, right?

Yeah, we’ve been to Europe twice! Last time was the longer one, it was a three-and-a-half week tour, so we got to really experience that. We had an incredible sound woman named Julie, and it was really cool to have an all-woman crew. She’s so great, she’s so good at her job, she builds pedals at home and everything!

Oh wow! Do you feel like the fact that you guys are all women impacts your music?

Yeah. In a way, we’re all like sisters at this point, so there’s a lot of openness. I think we can relate to each other on a lot of things because we are all women, and we do see all the bullshit you get with being an all female band with people not wanting to accept you as artists and wanting to trivialize it, making you only up there for their pleasure. I used to be the only woman in an otherwise all-male band, so I’ve experienced the other side, too.

I had a really good time—I played bass, and it was a really good band to be in. You become like family, so of course you bicker with your siblings, but we got along well. I just got too busy with NOTS so I had to quit that band. [The two band experiences] are just so different. I do really like the openness I feel I have with an all-female band, because we all deal with the same kinds of things. And I grew up playing soccer and having that great companionship with a team of women, and I think that’s really important.

Definitely. I saw that you did the art yourself, and you went to art school. Does your visual art background influence your music at all?

Yeah, I went to art school for photography, but I ended up getting really into video art and collage as well, and they all go hand in hand. The process is similar. When I make a collage, I do a lot of writing first, before I just start doing it, and I try to think of something I’m trying to get at with it and work with the images to hopefully convey what I’m trying to address. With photography, I’m interested in documentary-style photography, so I like to have my camera with me. I don’t really have a nice camera anymore, but I do have a little point and shoot that I take with me on tour, and I take a lot of photos on my phone, of course. I used to have a digital camera but it got stolen. But that’s OK, film is good for me—it’s like recording onto tape, you can’t really overthink things. Same with film, you don’t get to overthink it. You get to take 36 or so photos and then you’re done. It’s good for me.

If you ever have the idea that you think you want to play in a band, but you’ve never played an instrument, or you do play an instrument but you’re worried about not being good enough, I’d say do not worry about it. Forget all that, and just try to form a band and see what happens. I think some of the most interesting music definitely comes from that. And that’s kind of how we were, honestly. A lot of bands I know are made of people who didn’t really know how to play their instruments, and they’re doing some of the most interesting things. Don’t let it worry you, just try it. ♦