A zine dedicated to fandom, a comic on grief, and a writing guide to add to your reading list. 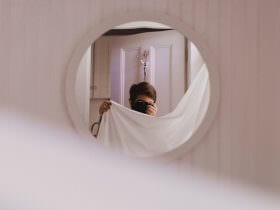 The Night Summer Was Over

Fanpages
Bay Garnett and Kira Jolliffe
2016, IDEA
Recently I read an essay by academic Douglas Davis titled, “The Work of Art in the Age of Digital Reproduction.” In it, Davis describes art as imitating the life/embodiment of a chameleon in its ability to slip in and out of the worlds of the digital and the real. One of Davis’s key points is that in the digital realm, artist and viewer come together as one collaborative unit. Fanpages is a zine published by Bay Garnett and Kira Jolliffe that celebrates just that. The first of hopefully many issues to come, Fanpages is comprised of one-page fanzines submitted via internet by people from around the world. Bringing zine culture back to its handmade roots of the ’80s and ’90s, Fanpages is comprised of personal writings and collages created by repurposing old materials. Flipping through the pages of this zine, you’ll find old photographs, writings, drawings, and paintings. I was especially drawn to it because of my extreme fascination with fandom cult-followings and aesthetics. Fanpages celebrates radical obsessions with pop culture sensations. I had a cloud of nostalgia hovering over my head while looking at this eye candy of a zine. If you want, you can even create your own one-page fanzine and submit it for their next issue! —Kati Yewell

Nicolas
Pascal Girard
2016, Drawn and Quarterly
Originally created in the spring of 2006 as a drawing exercise, Pascal Girard’s Nicolas documents Girard’s emotional turmoil surrounding the childhood death of his brother. The book has been recently rereleased with a text introduction and comic afterword by Girard. Nicolas is incredibly bare in documenting his growth, both in explicit ways—like the narrator talking to friends on the playground about his brother dying of lactic acidosis—and in more subtle, quiet ways—like Pascal getting spoiled after Nicolas’s death. Girard captures a high level of intimacy, though the book is composed solely of scene drawings. The narrative is quite touching, and with the addition of the afterword, readers get an insight into how laborious developing one’s personal style can be. —Rachel Davies

Writing Down the Bones: Freeing the Writer Within
Natalie Goldberg
1986, Shambhala Publications
Natalie Goldberg’s Writing Down the Bones is a beautifully thorough reflection on good writing, and the habits needed to produce it. It’s as much a how-to as it is a why-to, when-to, and where-to. I first read it in tenth grade creative writing. Tenth grade was a turbulent time: Freedom was getting a debit card, and uncertainty was not fully knowing how to use a debit card. Uncertainty was no stranger to me. A writer within? And I had to free him? Fortunately, Goldberg had answers for every question, often before I even knew I had one. Drawing from her experience in zen meditation, Goldberg presents writing not as a list of rote rules, but rather as a deeply spiritual process. It’s the accessibility with which she describes this process where the book shines. Writing, she teaches, is not something done exclusively with a capital W—it takes many forms. With practice, anyone can do it. Anyone. An accountant. A baker. A rodeo clown. An amateur astronaut. Even a tenth grader. This contemplative and inclusive approach is balanced by practical tips, each chapter a separate essay on a different aspect of writing. It’s so useful, it’ll have you wishing she could teach you everything. Where was she when I wanted to learn balloon sculpting? —Andrew Galanter ♦