The duo share their new music video and talk about their cosmic connection. 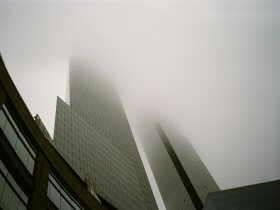 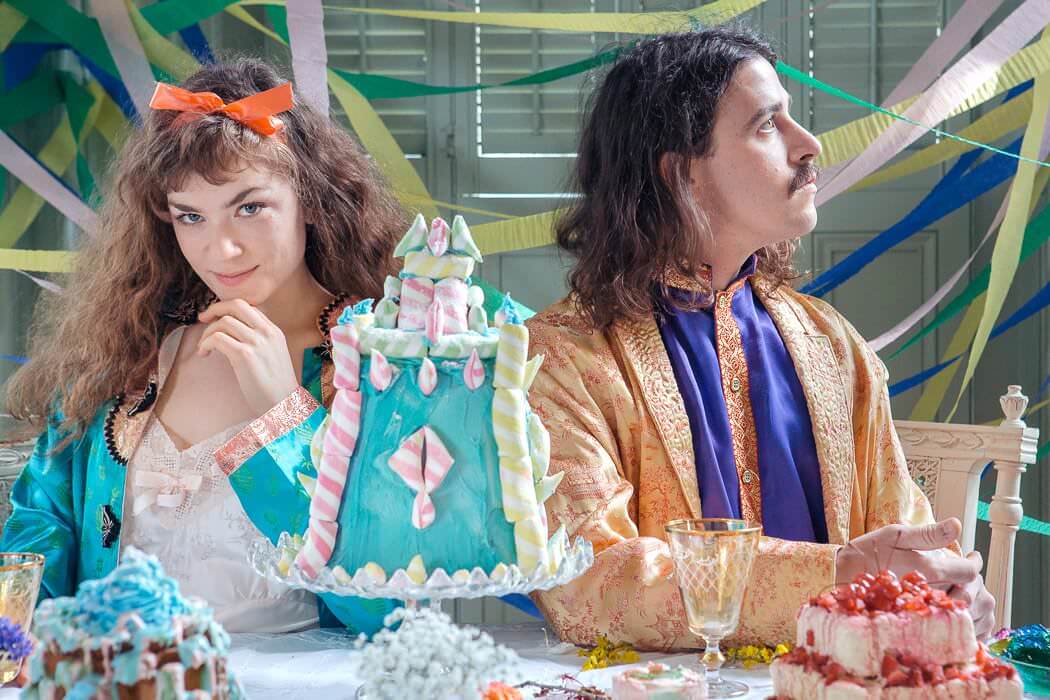 Formed from a serendipitous meeting at a record shop on Martha’s Vineyard, Leslie Schott and Andrew Valenti joined forces to create Holy Golden. In talking to the duo, it’s clear that they are completely enveloped in every aspect of creativity. Leslie draws inspiration from her daydreams, and Holy Golden’s film, sound, and photography all make it clear that Holy Golden are far from holding back on their dreams. Valenti, a lifetime musician, and Schott, a passionate filmmaker and writer, balance each other out—they have the combined skills to materialize all of their artistic visions. In their music video for “Beverly,” which premieres here today, the nomadic duo contemplate change: the change of season, change of place, and change of the self.

I spoke to Leslie and Andrew about their video for “Beverly,” teenhood, and moving around.

RACHEL DAVIES: I read somewhere that one of you lives in Michigan and the other in L.A. Is that true?

LESLIE SCHOTT: No, actually I’m from Michigan and Andrew’s from Martha’s Vineyard, which is an island in the Atlantic Ocean off Massachusetts. I lived in L.A. for a few years when I was pursuing acting and filmmaking. I met Andrew on Martha’s Vineyard and we started recording music as Holy Golden in L.A. Right now, we’re actually recording with a producer in Rhode Island which is totally random, but we’re here recording our third album.

What brought you to Rhode Island?

LESLIE: Well, I went to an all-girls boarding school and a friend of mine from school got a job at the Picasso Museum in Paris and asked if I would house sit for her while she was there. So, I came and did that and then we decided to start recording an album out here because it was a really inspiring place and pretty affordable to live. We’re just going with the flow. We’ve been here for almost a year, and it’s not permanent but it’s really fun. We live in this amazing ballroom that was built in 1855. It’s really cool!

Wow! Had you been to Rhode Island before?

ANDREW: No, I’d never been either and I grew up right next to it. [Laughs]

Is that where the “Beverly” video was filmed?

LESLIE: No, I started filming “Beverly” two winters ago when I was living in a horse barn in Martha’s Vineyard, before Andrew and I moved back to L.A. We’re kind of all over the place, our story has a lot of turns! I started filming it there—at the horse barn—and then I had to take a road trip back to my hometown in Michigan, and I filmed all these bits and pieces to document what was going on in my life at the time. It went up until the spring, so it documents winter from spring, and most is shot in my hometown in Michigan.

Did you live there for most of your life?

LESLIE: I did, I was born in Cincinnati, Ohio, but I lived in Michigan for most of my life.

You mentioned moving to L.A. for acting—was film your original artistic outlet, or have you always been interested in music?

LESLIE: Everything is really connected for me and they intertwine and cross over at different points. When I moved to L.A., my intention was definitely to pursue a career in acting, and once I got there the reality of that felt limiting a lot of the time—it was a lot of asking other people for permission to do things. So, I started to make my own films and play music with different people. When I met Andrew on Martha’s Vineyard we just totally clicked and started making videos and music. That’s when the two worlds combined, and I found a way to be doing film and music, which I love equally.

How do you think Holy Golden has changed since you first started the project?

ANDREW: I’d just say that we’ve just become more focused and determined on getting it out there. We have so much material that we’ve created and just kept to ourselves.

LESLIE: Yeah, it was like just writing in a diary, on a daily basis, that you loved—you’d share it [with] your friends and the people closest to you. But in the past year we’ve really made this conscious decision that we want to put it out in the world, and build it into this beautiful world of creativity that’s under the moniker Holy Golden. So it’s changed in that it just really naturally grew and grew. We’re able to work with more people now, too, whereas we used to do every component for ourselves. Now we’re really interested in finding other people to work and collaborate with.

ANDREW: In a way, it’s like Holy Golden started as a place we would go to, but now it’s a world that we’re a part of. It’s totally encompassed us.

How did you two first meet?

LESLIE: It was December 10, a few years ago, and I was walking around Martha’s Vineyard the island, and I happened to walk into a record store where Andrew was working. It was the one day a week that he worked there–

ANDREW: The only record store on the island!

LESLIE: Yeah, and I guess he saw me through the window and thought “I hope that girl walks in here,” and I did, and it was this very strange, cosmic connection instantly. At the time I was living in L.A., so we just stayed in touch, and every time we were together we would write a song or make a video. We just had this creative connection, and we had this very serendipitous meeting. We joke that it’s the beginning of some cheesy movie.

ANDREW: We also found out that there was a lunar eclipse that evening.

Oh my god! [Laughs] So, the band has a really strong visual aesthetic as we’ve been talking about. Where do you get inspiration from for that side of Holy Golden?

LESLIE: For me, a lot of it comes from film and reading. There are certain worlds I’ll always gravitate toward, like anything that has a mysteriousness or darkness to it. I’d say that the majority of my visual inspiration comes from daydreaming, which is something that I practice all the time to see where my mind leads me. It has created all of these visions that I get for music videos and the songs that I write. But, yeah, a lot is from film, books, and poetry. Just stuff I’ve collected over my whole life!

I have this favorite poet, her name is Anna Akhmatova, she’s a Russian poet. That’s my go-to for lyrical inspiration. I love Jeffrey Eugenides, actually Virgin Suicides is based in the town I grew up in. But anything that has a dreaminess to it, like that. Maya Deren was an experimental filmmaker [who] created these incredible visual worlds. She was a female pioneer because there weren’t a lot of female filmmakers. I watch a lot of foreign films, I can’t take something from anything that has a strong aesthetic.

ANDREW: A lot of the Criterion Collection films, like this movie called Valerie & Her Week of Wonders, which is incredible. We’ve seen that a few times now.

LESLIE: We try to watch and read stuff on a constant basis to get out of our own perspective.

Totally! Did either of you go to school for music?

LESLIE: No! Andrew came from a musical family, though.

ANDREW: Yeah, I’ve been playing music my whole life. I started with the violin and progressed with many different instruments: cello, trumpet, you know. When I was in high school, I taught myself guitar and started writing my own songs.

Leslie, did you always play music?

LESLIE: For me, music is more of a once-I-left-the-nest kind of thing. My family wasn’t musical at all. In general, my family’s very supportive but they didn’t really see creative pursuits as “real.” Anytime I hung out with best friends we’d write songs, but I didn’t start to take it seriously until the past couple of years. But I’ve always been writing and a lot of the times I’d put tunes to the writing, so it felt very natural to me to start writing albums and start giving it more shape. I didn’t grow up doing it at all, and I feel like people who know me from high school probably find it a little surprising. [Laughs] I wasn’t singing in the choir or anything, it was more of a private thing and it took me a long time to build up the confidence. Sometimes it’s been a struggle, because I have a tendency to be really shy, so I have to give myself the credit. ♦