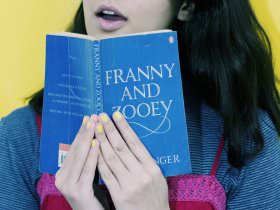 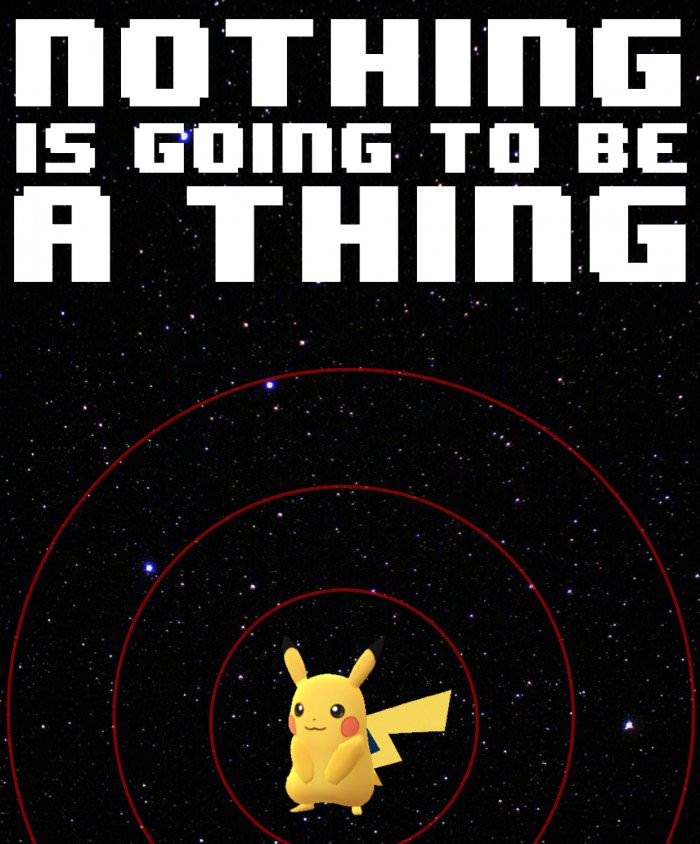 In this edition of Tech Trek, we imagine the effect augmented reality may have on our lives. Plus, a review of a sci-fi short written by artificial intelligence.

POKÉMONPOKÉMOMKOPÉNOM! Raise your hand if you are cuckoo for Pokémon! (Millions of hands just flew up in the U.S. alone.) In case you don’t know, Pokémon Go is a smartphone game that creates a virtual reality on top of our own, also known as augmented reality. Basically, you can go out in your town and catch Pokémon in a Walgreens, or a cow pasture, or pretty much anywhere you have a GPS signal. The game is hugely successful, and has proven that people are willing to spend a lot of time in augmented reality. But is it because Pokémon Go is so great, or because real life can kind of suck? Do we play for love of Bulbasaur, or do we play to escape?

Today we want to explore the dawn of augmented reality, and how it could potentially affect the way human beings seek meaning in their lives. What might happen when automation, a stagnant economy, and job scarcity converge to make it harder than ever for people to find fulfillment? Can augmenting our dismal reality be the solution? Or will it further muddy the problem? Here are three potential scenarios:

Scenario One: Augmented and virtual reality will make life better.

Augmented and virtual realities will continue to become more sophisticated. They will feel less “game-like,” abandoning artificial goals like “leveling up,” and will become an ordinary part of our daily existence. As there is less real work to do, as more things are automated by machines, we will all have more free time. We will develop enriching and satisfying worlds in the AR/VR (augmented reality/virtual reality) space. These alternative realities will be open and democratic, and if you don’t like one world, it’s easy to switch to another. People will be happy working with digital products, which will be less environmentally damaging than physical products. The waste and pollution of a consumer-driven economy will be reduced, and more habitats can be restored to wildlife. To me, this is pretty much the dream scenario.

Scenario Two: Life will be the same, only different.

Augmented realities like Pokémon Go will continue to be popular diversions from real life and real work, but will never offer us the same kind of happiness or satisfaction that a fulfilling career would. These AR and VR systems will continue to be owned by large corporations, and become another driver of income inequality.

An awesome book about this type of scenario is Neal Stephenson’s Snow Crash, which is about a lowly pizza delivery guy who lives in an 8-by-10 storage unit in “Reality,” while his avatar in the VR “Metaverse” is a fabulously rich and famous sword fighter. In Snow Crash people use the Metaverse to escape a dysfunctional world in which everything—including entire countries—is owned by corporations. The book was published in 1992, but feels eerily prophetic to our time.

Augmented realities will be used to keep the masses in control, while the world is ruled by a few elites. It will be the end of democracy as we know it.

The Black Mirror episode “Fifteen Million Merits” is an example of this kind of nightmare scenario. It shows a world where enslaved masses “play” an AR biking game in order to accumulate credits to buy food, make life choices, and turn off the constant stream of television programs and advertisements that they would be otherwise forced to watch. It’s a disturbing and dystopian vision of AR where the elite are using technology to pacify and subjugate a vast underclass.

So which of these scenarios will be our fate? That sort of depends on us, and how mindful we choose to be as consumers of augmented and virtual reality. It’s a slippery slope from Pokémon Go to Black Mirror. Bottom line: Catch all the Pokémon, just don’t let Pokémon catch YOU! —Maggie

If you want to know what movies may be like in the future, check out Sunspring—an incredibly odd and intense, nine-minute sci-fi short written by artificial intelligence. That’s right—a machine wrote this! The robot revolution is nigh, folks. Super nigh.

The short is set on what looks to be some kind of space station, and there are three characters—H, H2, and C (H is played by Silicon Valley’s Thomas Middleditch). The movie is about an intergalactic love triangle…maybe? That is to say, this screenwriting AI may have scripted a nine-minute movie, but Jane Campion it is not. That’s the thing that makes Sunspring so great—it is hilariously incomprehensible.

The AI that crafted this crazy, crazy movie is actually a type of recurrent neural network (which is basically a network of algorithms that process sequential data) called long short-term memory (LSTM). The AI named itself Benjamin. With an LSTM you input data and the software detects patterns, “learning” from them, and then produces another set of data that follows those patterns. Here the initial data was a bunch of sci-fi scripts (movies like 2001: A Space Odyssey, E.T., The Fifth Element; plus, for some reason, Silver Linings Playbook), and the result of all of that “learning” Benjamin did is this weird-ass short film. The filmmakers—director Oscar Sharp and his AI researcher pal Ross Goodwin—compare the way Benjamin functions to the way predictive text works when you’re texting or writing an email. Your phone’s AI “remembers,” so to speak, all the things you’ve typed into your phone before, and then tries to guess what you’ll type next. It’s an apt comparison, because the movie feels like an extended autocorrect fail. And I mean that in the best way possible.

In this hyper dramatic sci-fi tale, you’ll find impenetrable exchanges like this:

H: I saw him again. The way you were sent to me…that was a big honest idea. I am not a bright light.

It’s all gobbledygook, right? But when you consider the science behind those words, it’s hard not to see Sunspring as the coolest gobbledygook ever. —Amber ♦