Mermaids, a science podcast, and more media to devour this weekend. 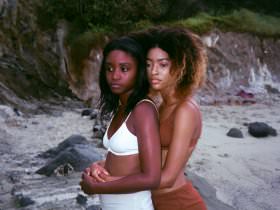 Thanks to the Netflix series Stranger Things, the 1990s coming-of-age queen, Winona Ryder, is once again gracing our screens. Since she pretty much narrated my early teens, it’s making me all nostalgic, so my rec this week is one of her first movies, Mermaids. In this roller coaster of a story, she plays Charlotte Flax, a 15-year-old who goes through a new phase every week (haven’t we all been there?). Her current obsession is becoming a nun. Charlotte’s cool young mom, played by the amazing Cher, is a serial monogamist who won’t settle down and constantly moves Charlotte and her little sister (Christina Ricci) around the country. Cue serious family tension, combined with romantic drama. I always totally related to this film, not only because Winona’s peter-pan-collar-chic is literally all of my style goals, but because the experience of having a mom who’s cooler than you isn’t far from home. Watch Charlotte and her mother both stumble through romantic encounters, eventually coming to appreciate the importance of stability, family, and just letting yourself float. —Micha Frazer-Carroll

When Hillary Clinton exclaimed “I believe in science” during her Democractic National Convention speech, I thought to myself, Hell yah to a woman who opts for facts and numbers rather than fear mongering. I also thought how well-timed it was that the new Gimlet Media podcast Science Vs dropped a few days earlier. Each week on Science Vs, host Wendy Zukerman tackles the myths behind society’s biggest fears or misconceptions through good ol’ deep-dive reporting (a radically rational concept, no?). The first three episodes—on fracking, attachment parenting, and gun control—are out. Expect future episodes to confront organic food and more. Plug in your headphones and feed your brain! —Jinnie Lee

Everyone copes with death differently. When Taiwanese-American artist Maggie Lee’s mother died unexpectedly, Lee honored her mom’s life the only way she knew how—through an open lens. In her super-indie documentary Mommy (you can rent or buy it on Vimeo), Lee weaves a poignant narrative about her mother’s life before and after her death. She pieces together her mother’s story—including her emigration to the U.S. and the discovery of secret artifacts at her house in New Jersey—through funny home movies, photographs, and audio recordings. Whether you’re a budding filmmaker, you’ve lost a loved one without warning, or are a child of immigrant parents, Mommy is a memorable li’l flick that leaves an impressionable mark on the healing heart. —Jinnie Lee ♦