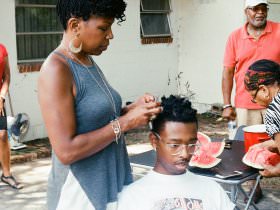 Sylvia Plath: Drawings
Sylvia Plath, Frieda Hughes
2013, Harper
I have always been interested in seeing writers and other creative minds take on artistic practices apart from what they’re known for. Sylvia Plath: Drawings is a collection of Plath’s illustrations from 1955 to 1957. During that time, she spent her days at college and met Ted Hughes, whom she married in secret! I often recommend this book to friends who are just getting into Plath. She wrote profoundly and beautifully about mental illness, but there is so much more to her work than that! Most of her sketches are haunting, starkly inked inanimate objects that stand alone on the page. It makes you question what purpose or meaning each had in her life. Writing can express a point of view in a very straightforward manner, but I believe drawings can tell another dimension of a story. I highly recommend reading Plath’s The Bell Jar, and then going on to read Sylvia Plath: Drawings. Plath’s drawings, alongside her writing, add more icing to the cake. —Kati Yewell

Kindred
Octavia Butler
1979, Doubleday
It’s 1976, and Dana’s 26th birthday. She suddenly gets dizzy. The surroundings of her Los Angeles home fade around her, and suddenly she is by a river bank. Dana, who is black, sees a white boy struggling in the water. She saves him from drowning—and then his father points a gun at her. She grows dizzy again and wakes up at home, with her confused husband beside her. Soon it happens again, but this time Dana realizes where (and when) she is: on a Maryland plantation in the early 1800s. Her life is in grave danger, but she seems to be there to save this boy, Rufus Weylin, whom she learns is the son of the plantation owner and one of her ancestors. Kindred is partly a time travel story, but as Dana continues to return to and spend more time in antebellum Maryland, it becomes primarily a slave narrative. Dana watches family bonds ripped apart by slavery. She experiences firsthand what happens when whites consider black women to be “too educated.” She witnesses and survives many types of violence—the ancestral line that she seems to be there to protect is one that was the result of rape. At one point, when Dana’s husband, a white man, travels back with her, Dana is forced to act as though he is her master and she is his property. She is horrified by how it feels to adhere to these roles: “I felt as though I really was doing something shameful, happily playing whore for my supposed owner. I went away feeling uncomfortable and feeling vaguely ashamed.” This is not an easy read. It left me physically shaking and sick to my stomach on several occasions. But I can say that I will remember Kindred viscerally for the rest of my life, and what it has to teach about enslavement, racism’s terrible legacy, and the relationship between power and privilege. —Stephanie Kuehnert ♦