I Could See Further Then

A photographic time capsule from a summer of independence. 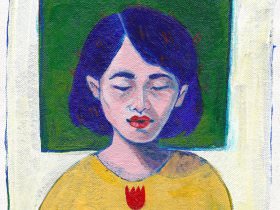 When Doing Nothing Is a Triumph