Hardly Boys: All I Want

A new video by a self-proclaimed “friendship punk” band. 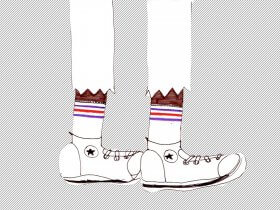 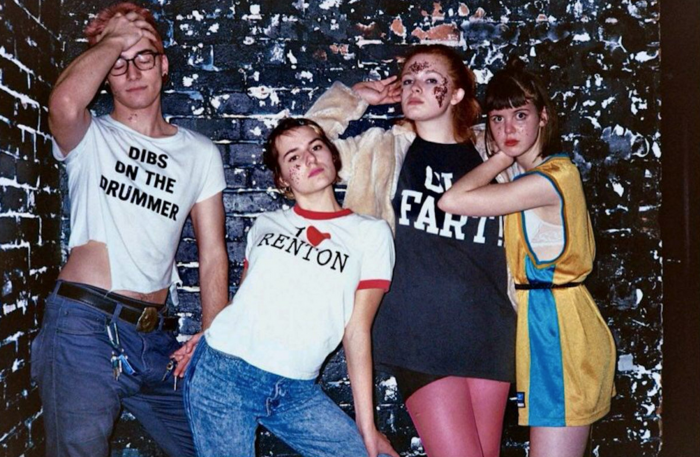 Hardly Boys is a self-proclaimed “friendship punk” band from Seattle consisting of friends Miranda Hardy, Anna White, Emma Roffey, and Zeke Bender. They don’t take music too seriously, but that doesn’t mean they aren’t busy. Two months ago they released their first EP, Tit Punch, and have since gone on tour, started a record label, and filmed this fun-as-heck video for the song “All I Want”:

It’s a colorful ode to Ring Pops, Barbies, and friendship directed by the band’s own Emma. When I watch it, I feel like I’m watching my own Snapchat story, reminiscing about how much fun I had with my friends.

Earlier this week, I talked to the band about the video, the hottest mullets, and “building people up.”

MADELINE KEYES-LEVINE: I love that your self-proclaimed genre is “friendship punk,” and I love that the video really encapsulates that.

EMMA ROFFEY: Yeah, it’s just all of our friends.

MIRANDA HARDY: All of our friends and us. It’s so relatable.

ANNA WHITE: Emma was the creative genius behind it all.

EMMA: I couldn’t sleep one night, and I was thinking about it so much, and I was like “Ahh, damn it.” But yeah, [I] had some ideas, threw it together, and had beautiful people to help me out with that.

MIRANDA: Yeah, that also speaks to us as a band because we do try to be super accessible to everyone. Like, I think anyone can enjoy our set. Even people who don’t like punk music or whatever, because we try to make it funny.

EMMA: Yeah, people who take music too seriously are just a little too much for us.

MIRANDA: Wait, this is an important quote from Lil Yachty that Zeke needs to throw in.

ZEKE BENDER: I think he said something like serious music is boring.

MIRANDA: I love it! I feel like she heard our song and then was like, “I’m gonna get a mullet.”

Do you have any other mullets that go on the top hot mullet list?

ANNA: OK, so the song was inspired by the very first house show we went to, and there was this boy with a very hot mullet. His name was Boris, he lives in Olympia, [Washington,] and he doesn’t know the song was written about him.

EMMA: Oh, and when we were on tour, we listened to a lot of Tears for Fears and they both have very cute mullets.

That is an iconic mullet!

MIRANDA: Yeah, that is iconic.

You can’t talk about mullet without mentioning Billy.

MIRANDA: Zendaya also rocked a mullet at the Met Gala.

EVERYONE: George Michael! Of course.

I wanna talk about Tinder, because you’ve posted on the app. I’m obsessed with Tinder.

MIRANDA: Tinder is my ballpark—all of our ballparks—but I LOVE Tinder. We just went on tour and at one of our shows in San Francisco, I gave a workshop outside on how to have a successful Tinder profile. Also got a couple people to come to the show because of Tinder.

EMMA: People we knew who saw our Tinder Social profile messaged us and were like, “Oh my God! Are you playing here,” and then went to our show.

ANNA: I recommend all bands on tour make Tinder profiles.

EMMA: It worked wonders for us.

MIRANDA: I sent our Bandcamp link to a guy this morning.

That’s amazing. Going back to friendship, you guys are friends with Tacocat and you seem really involved in the scene in Seattle. What’s your favorite thing about Seattle?

MIRANDA: So many things. We just played a show with Mommy Long Legs and Mr. Wrong—they’re from Portland—and this band Sleepy Jeans. Afterwards, I just had this awesome conversation with the members of Mr. Wrong and some of the members of Mommy Long Legs about how awesome it is that Seattle makes music accessible to people of all ages. Even venues that are bars sometimes put on all-ages shows, and it’s just so special to have that. That’s how we, Emma, Anna, and I all met—going to shows like Chastity Belt and Tacocat and being like, “Oh we can do that!” And then Zeke joined!

ZEKE: I was just hanging out…

ANNA: One of the most important thing is how supportive it is of young people. In Chicago—I go to school in Chicago—people aren’t as close-knit and supportive of new artists. Here, people like Tacocat have been SO good to us starting out, and it helped us so much. Miranda has been saying at all of our shows, “We’re all about building people up.”

MIRANDA: It’s true! Build people up! Because…ahh! So many good things come from being supportive.

ZEKE: Everyone here is SO nice. Like, every person in every band is SO nice.

I know that a lot of you go to college outside of Seattle. How does it affect your band dynamic being apart for a lot of the year?

ANNA: Yeah, it helps us be more intentional when we’re together because we have to do everything when we’re all here.

MIRANDA: Being away gives me time to write because I can just be emo.

EMMA: Yeah, and it’s all the better when we get back because we’re super excited to do it. It’s not like a regular thing.

What is the best scenario to listen to “All I Want” in?

EMMA: In a top-rolled-down-convertible-Jeep with all your friends.

MIRANDA: I wrote it when I was on the bus. I just love listening to music on the bus and being angry or sad. That’s my ideal scenario because I was really fucking mad when I wrote it.

Do you want to talk about what you were angry about?

MIRANDA: I wrote it concerning feelings that I’m always in places of privilege, and I come from a place of not that much privilege, and I’m really lucky because I was given scholarships to be able to be there. It’s just about having this frustration of going to those places and having this image put on me and having people assume I’m like that when I’m not. Really all I want is to be a computer science nerd and have my basic rights and all that jazz.

ANNA: Shout out to WOMEN’S RIGHTS.

MIRANDA: Shout out to building people up, because that really is our motto.

ZEKE: Shout out to Prince for ever existing.

ZEKE: Initially it was just so we could get on Spotify, but then we were like, “We might as well do a little bit with it.” Our friend Emma Lee Toyoda is going to be on it.

EMMA: We’re hoping to get young and small bands supported by something. Like helping them make merchandise, and tapes. Yeah, we figured out how to make tapes! That’s sick!

ANNA: Yeah, this EP has been a learning experience. We pressed all of our own tapes and figured it out off of YouTube.