His genuine celebration of all emotion inspires me to be kinder to myself. 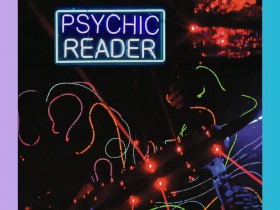 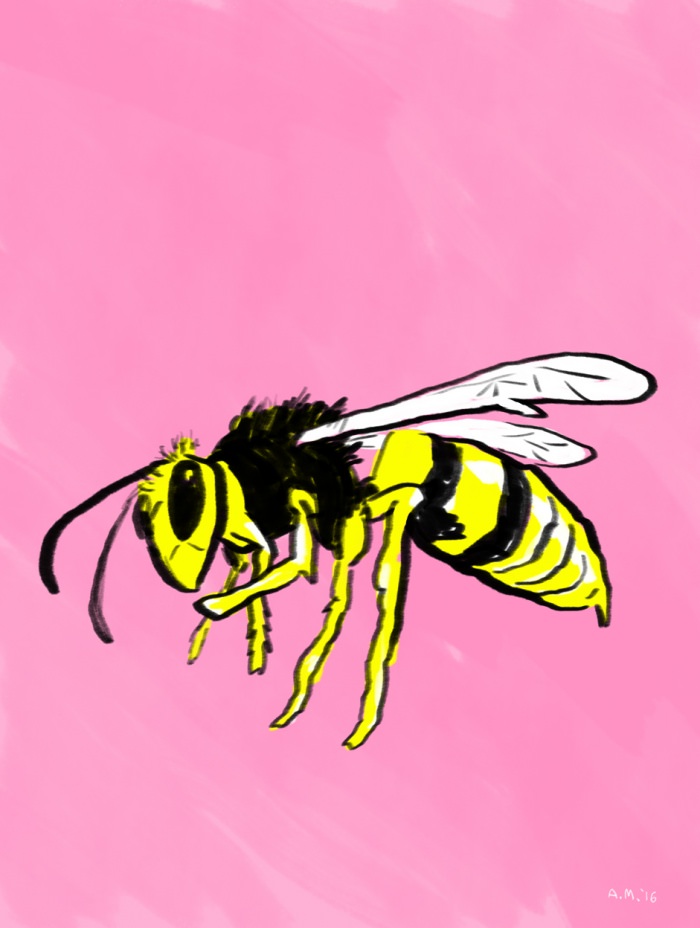 At the start of spring break, I opened my phone to a text from my friend Emily. She’s on an airport shuttle, racing to catch a flight back to her home in Chicago. We had just seen each other a few hours ago. I figured it must be something important, that she must have forgotten something at school. The text is a screenshot, and to us, it is important: 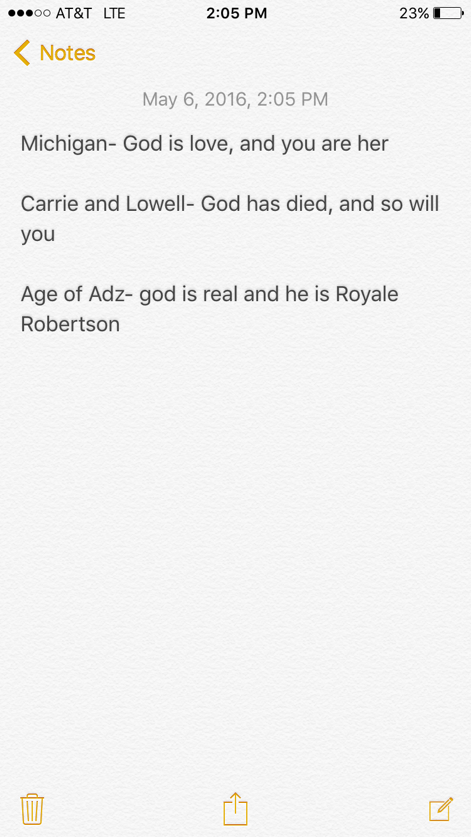 In case you aren’t familiar with what she’s talking about, Michigan, Carrie & Lowell, and the Age of Adz are all albums by singer-songwriter Sufjan Stevens, and Emily and I have suspicions that he may be the purest person on this Earth. His purity stems from his full musical acknowledgement and attention to flaws as well as strengths. His music, even when at its most sentimental or playful, never comes off as sarcastic or false. That genuine celebration of all emotion inspires me to be kinder to myself when I’m feeling sappy.

Having grown up between Michigan and Illinois, home to an abundance of music from folk and jazz to techno and house, Sufjan writes music that can land anywhere between hushed acoustic ballads, gloriously cacophonous orchestral anthems, and electro-pop dance tunes. Hidden in the instrumental layers is something spiritually yearning and beautiful that—since I first heard them upon the release of Sufjan’s latest album, Carrie & Lowell, last spring—does something fucked up to my heart.

Before I heard Sufjan, I’d loved music with a similar passion, but as soon as I heard him I felt his music fill my heart in a way that could be nothing less than indelible. There’s something in there, a softness, a miraculous sincerity and earnestness, and it keeps me entranced. It’s what drew me to my best friends.

On one of those first hot, September nights at the start of college, I’d met a group of girls—Emily, Morgan, Ilah, and Lanah—who invited me to eat with them at the cafeteria. We quickly discovered we had a lot in common. Besides our interests, we shared similar ways of approaching the world. We spent the rest of the night hanging out in one of the lounges, and upon finding out we all loved Sufjan’s music, tried to figure out exactly what about his music we loved, and why it pulled our hands over our hearts, as if we needed to keep them from bursting out.

While chatting, Emily shared that Sufjan’s earlier songs, which were often written about specific Midwestern towns or natural landscapes, gave her a new perspective on things that she’d previously found boring. Now, so many miles away from her home of Chicago, she turned to these songs whenever homesickness sunk in its teeth. The unfamiliar New England surroundings felt a little bit safer when she listened to him. And while I’d never been to the Midwest, I strongly identified; in his lyrics describing the flight of backyard birds, sleepovers at friends’ houses, and memories from childhood camping trips, he gave a certain glory to mundane facts of life, not ranking the treasure or the trash or anything in between, but instead granting each their own kind of magic.

This, I thought, is a good way to live. It’s hard to be disappointed when you see things from a constant state of wonder. After listening to his music for a while, I began to see ordinary things as miraculous in their own way. I stopped to watch squirrels sneaking food from garbage cans, old men walking bright-eyed dogs, people sleeping on the bus. I began to see the purposeful way things seem to happen in the world, and to appreciate things more.

Another friend, Morgan, who at the time had pink hair, and who was one of the first people to seek me out to be friends, brought up the ambiguity of his lyrics, specifically about love. “Even if he came out as straight, it doesn’t mean his songs aren’t queer. That is what makes them so good—they’re encoded with queerness in a way that isn’t outright obvious to anyone but queer people. For me, it’s just important to sense some kind of understanding of [our] experiences. It’s almost like a conversation.”

“It doesn’t exploit us,” I agreed. “But it doesn’t ignore us either. It kind of goes under the radar. I can say that ‘The Predatory Wasp of the Palisades is Out to Get Us!’ is a song that means a lot to me and that I identify with, but that doesn’t immediately out me as gay, even though it’s a song about him kissing and being in love with his best friend at camp. Also, how great is it that he wrote a song about the experience of being a queer kid without remotely sexualizing or objectifying queer kids, but giving them the same innocence and sweetness given to straight kids? That’s like, the only time I’ve heard a song that did that.” I told Morgan a story about the first time I came to grips with what my queerness meant in the world. It was when I was in fourth grade, and while fooling around with one of my friends, I playfully tried to kiss her. The look of horror she gave me stung, gave me pain that, because I’d already subscribed to heteronormativity, I interpreted as deserved guilt for doing wrong.

I didn’t say it at the time, but Sufjan, whether intentionally or not, frees himself in many ways from traditional masculinity. I mean, honestly, he dresses like a frat boy. He doesn’t look at all like what I’d imagine a singer-songwriter who plays the banjo would look like. The fact that his music is so vulnerable and emotional directly disrupts the idea that men who present as masculine have to hide their emotions behind violence or disinterest.

Ilah, who was the only one of us who had seen him live, said that she had a new devotion to him after watching him live. “There is so much love and tenderness in his music. I feel like he believes in me!” she exclaimed, only half joking. “When I saw him, it was in a big theater, but there was seating, and everyone was completely quiet while he was singing. Kind of like being in church. It’s hard to describe the effect he has on me because it’s sort of indescribable, like he possesses my whole body and soul.”