The premiere of a triumphant new video, and an interview with Kathleen Hanna. 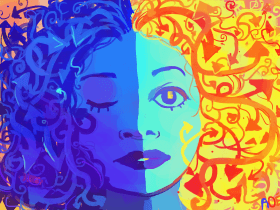 How to Dump a Dream 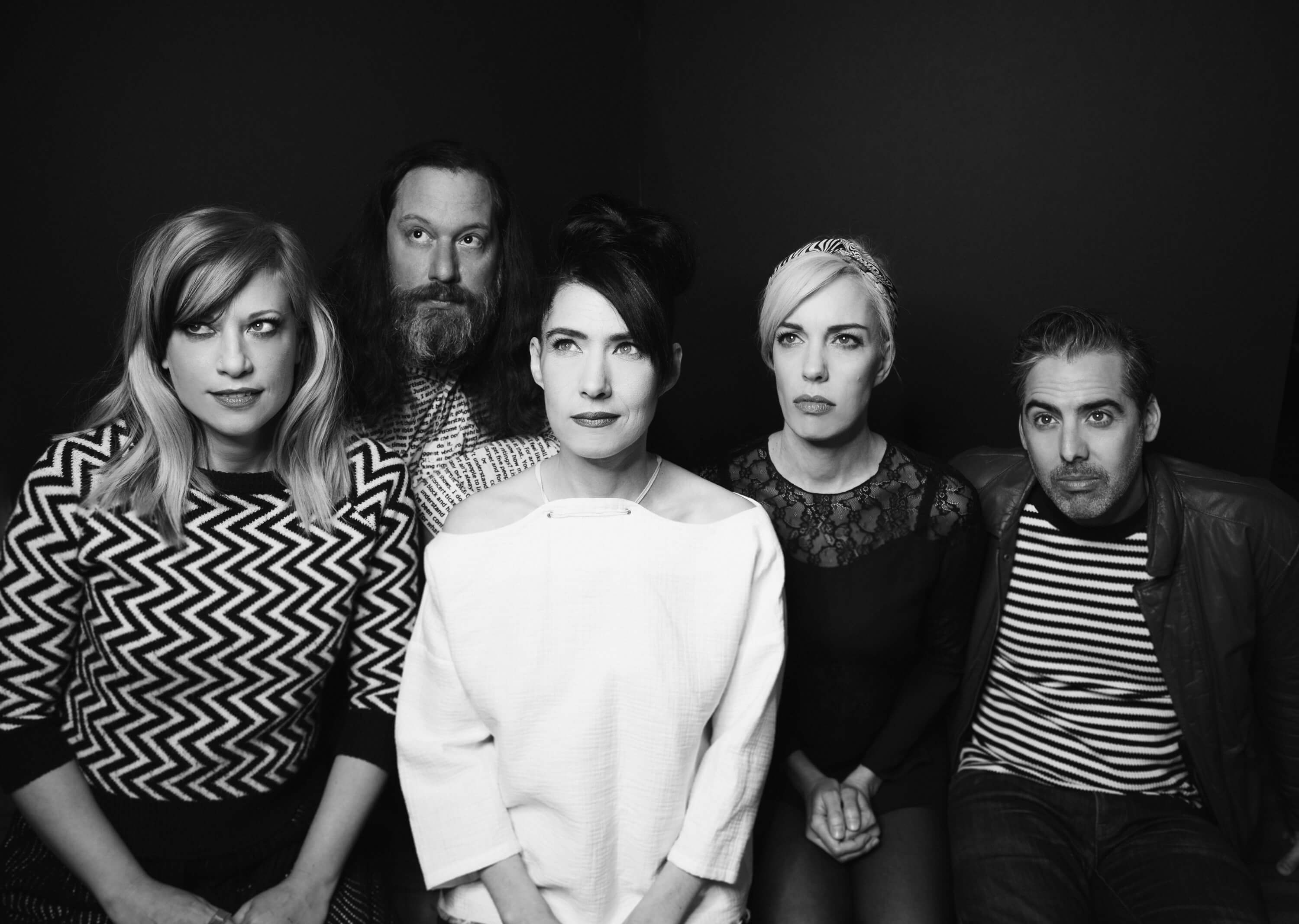 Kathleen Hanna found herself torn between two identities once her band Bikini Kill fell apart: An iconized leader of riot grrrl’s growing cultural movement, and a sensitive artist who couldn’t help but internalize its backlash. Toward the end of Bikini Kill’s run in the ’90s, Kathleen retreated inward and away from the riot grrrl spotlight she’d grown to resent. Carrying the torch for women’s rights and safety in the male-dominated punk community had started to burn her, with every death threat, hate letter, or misrepresentation of the cause.

Exhausted, Hanna needed a change. So in 1997, she bought a $40 dollar drum machine and did exactly that. Isolated in her bedroom, Hanna recorded an album’s worth of cathartic, lo-fi musings under the pseudonym Julie Ruin. Two bands (including Le Tigre), 20 years, and a harrowing battle with Lyme disease later, Hanna has developed Julie Ruin into the Julie Ruin, a full-fledged, five-person live act that hasn’t lost sight of the healing impulse that inspired it.

Tomorrow, the Julie Ruin releases their second studio album, Hit Reset. And today, we are so, so, so excited to premiere the music video for an all-out anthem from that record called “I’m Done”:

Last week, I caught up with Kathleen to talk about Hit Reset, which she describes as her most personal work yet.

KATHLEEN HANNA: Good question. I guess the thing that hasn’t really changed is that a lot of this project, and the [Julie Ruin] solo project, was sort of about figuring out who I am in the moment, because it’s really easy for me to get confused. I’m like, Am I still that messed up little kid who was really afraid? Am I a really tough feminist? Am I a sick person or well person? Am I a strong, wanting-to-be-out-on-the-stage person, or am I a shy person? Just trying to get in touch with my own feelings and my own reality was kind of the beginning of the Julie Ruin for me, but I hid away in my apartment and did it. I was like, “I have to shut the world out.”

[For Hit Reset,] I had friends that came in on it. Part of the beauty was that I realized people would help me. I called people in my town, and I said, “Can I borrow this? Can I borrow that? Can I go to your house and play drums? Or play the typewriter? So it was this thing that I could do in the middle of the night in my house, because I recorded it myself, but it was also like I reached out a little bit for help on that. I would be like, “Can you do this or can you do that?” It made me realize the world is still a good place, because Bikini Kill had really just made me feel really frightened. I didn’t realize how bad it was until I went out on tour with Bikini Kill and the reaction was at first just wanting to beat us up. Then girls crying in the front row, and then all the men behind them wanting to beat us up. It was really kind of weird, with people heckling me. I lived in a small town when there was this really big thing in the ’90s: Either you’re a sell-out or you’re indie, and there is no in between.

Somebody else could just take our picture and put it in a magazine. We didn’t have a publicist. We didn’t have a manager. We booked our own tours, and then people were mad at us that we were in Rolling Stone magazine. But we didn’t even give them the picture. We weren’t even interviewed, so why [were they] mad at us? Either we were “too big for our britches,” we weren’t the “right kind of feminist,” or we were too “man-hating” or whatever. The band started falling apart, and I was just like, Man. Who the fuck am I anymore? I felt like it was a divorce between me and three other people that were like my family. It was everything to me. When I wasn’t in the band, I had no idea who I was.

As we were just kind of falling apart, that’s when I started writing the songs on [1997’s] Julie Ruin. I was still in Olympia. Still in Bikini Kill when I wrote that record, but I was really depressed and really scared and going through some depression issues. But [Julie Ruin] helped bring me out of it. It was really a time when I said, “I’m not gonna sit here and write songs to help other people. I’m gonna write these songs to get my feelings out and to discover who I am and that’s OK.”

Flash forward to now, and I kind of went through the same thing, but 20 years later. This time, I was like, “I’m not gonna hide in my apartment. I’m gonna find the most talented people I know, and I’m gonna hang out with them and we’re gonna make something.” And it was just so much more gratifying because I realized you don’t have to do it all yourself. I figured out what I’m good at, and what I’m not good at, so I got people who were good at the things I’m not good at.

You said in a recent interview that music is a way to find your way back to yourself. For people familiar with your story, this latest record feels so much like a road map of the struggles you’ve overcome.

Did I say that? Let’s pretend I said that. It is like a road map, totally.

You’ve dealt with a lot of trauma in you life, from an abusive childhood, to endless harassment during Bikini Kill. Then recently with your terrifying health issues. The lyrics on Hit Reset get really personal about those experiences. In what ways was writing this album therapeutic for you?

Well, there was definitely some stuff about illness that I felt like I couldn’t say on the last Julie Ruin record, [Run Fast,] because I was still so entrenched in it. I’m at a way better place with it now. I feel like I’m further away from being that totally sick person. It was really hard for me to do interviews at the time because I didn’t want to talk about it, since I was still sick. The last thing you wanna do is talk about it while you’re in it. It’s like somebody being like “Hey, tell me about the worst day in your life,” and I’m like, “Well, I’m living it now.”

So finally I’m able to sort of have some distance from and deal with some of the feelings I went through. I can recognize the connection between feeling like I was trapped in my house with this crappy asshole dad as a kid, and then I was trapped in this body that felt like it was on fire as an adult. I was just like, What the fuck, man? You do start thinking, What have I done to deserve this? All those kinds of questions. Why me? But tons of people have tons of worse things happen to them than I have. I find goodness in all of the people who have stayed by me and supported me and who make amazing work that totally sustains me. That I love. I feel fortunate to be able to look back now and say, “OK, here’s this connection of feeling powerless.”

Part of my way of getting through it is writing in a more subconscious way. Where I don’t force things to happen. I’m kind of admitting I don’t have control. I can do things, and be healthy, and try to have as much energy and as much fun as I possibly can. To feel as good as I can. But I can’t control the disease. It’s not up to me. Or I can’t control that it actually happened. That wasn’t my fault. You wanna pretend you can control it. Everyone wants to pretend if you were date raped that you can blame yourself ’cause you were drinking, and think, I’m never gonna go to a party and get drunk again. Well guess what? It doesn’t matter. This is really sad, but what are you supposed to do? Never have a male friend? Don’t go anywhere?