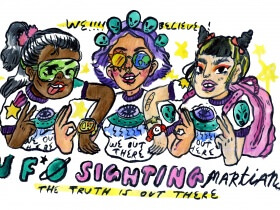 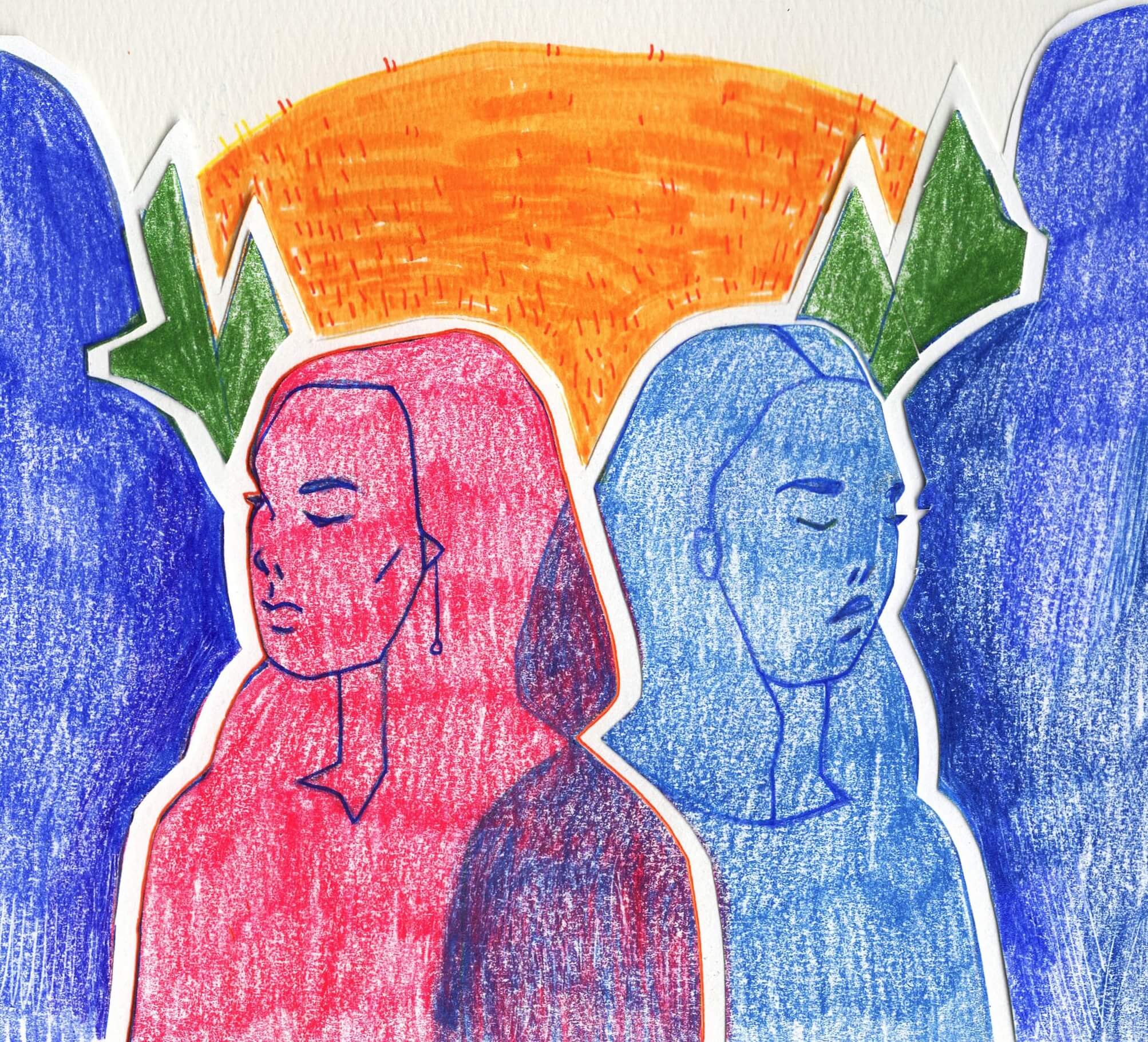 Once upon a time there were two girls, Ari (short for Ariadne) and Dee (short for Perdita), who lived next door to each other in the woods near a small lake. They were so close that they told everyone that they were sisters even though Dee had white skin and straight blond hair, and Ari, brown skin and thick brown waves. Ari had lost her parents in a car crash when she was very young, so she lived with her mother’s parents, and eventually, after Grandpa passed, just her Gran. Dee had never known her father and her mother was Away. She lived in a much smaller house than Ari’s with an aunt who spent all of her time either drinking or praying, meaning that Ari’s grandparents raised Dee, too.

They spent summers splashing in the lake and having tea parties with the birds on a little plastic table between their houses. During the rainy winter, they snuggled up in Ari’s bed to read and study, or on the couch to watch movies. All year round, they worked on the giant mural that Ari’s grandparents allowed them to paint on the walls of her bedroom. Ari created the backgrounds—woods, seaside, meadows—while Dee peopled them with faeries and animals, and portraits of the two of them. When one couldn’t sleep, the other made up stories to comfort her. Dee knew that Ari liked to hear about them living in their own cozy cabin in the woods, surrounded by friendly animals; Ari knew that Dee liked for them to end up in a castle in a distant land married to twin princes—or a prince and a princess, once Ari told Dee that she didn’t like boys—officially making them sisters and princesses. Whomever was telling the story, they always spoke the last line, “And they lived happily ever after,” in sleepy unison.

Completing each other’s stories, paintings, sentences, and lives, Ari and Dee were wholly inseparable until their 16th year, when Dee started to grow distant and became bent on emphasizing their little differences. She refused to tell stories about the woods and didn’t even want to hear about castles. Big city nightclubs and high rises and mansions were the only thing she believed were worth daydreaming about and she teased Ari for her desire to hide out in the woods or their “boring small town” forever. Dee started to skip school to hang out with a group of guys who’d recently moved into a run down shack on the outskirts of town. Dee laughed raucously around her new friends, but when Ari met them, her throat closed up and her stomach twisted into knots.

By the time that summer came, Ari hardly saw Dee except near dawn when Dee would climb in through Ari’s bedroom window and tumble into bed beside her smelling of smoke and sugary alcohol. “I was here all night if Auntie asks,” she’d say, but of course Auntie never did.

Gran did notice that Dee slept well into the afternoon and then disappeared at dusk instead of staying to eat, paint, and read or watch movies with Ari. “Some girls wander,” she said of this new pattern. Ari nodded and tried to push away her worries about Dee, even though when she asked Gran if they came back, Gran’s face had gotten a little stiff and she said, “They have to choose to.”

One afternoon in August, Ari walked into her room, expecting Dee to have vanished through the window as usual and instead found her painting. Ari smiled at first, but then realized that Dee was covering one of her favorite portraits of them as girls of six holding hands by the lake.

“What are you doing?” she cried.

Dee turned and grinned at her. “Relax, sister. That was our past. I am going to paint our future. And this time I’ll go first. I’ll paint us and then you can fill in our surroundings. What do you say?”

Ari was so relieved that Dee was back and wanted to embark on a new project with her that she agreed and helped Dee turn that section of the wall into a blank canvas. As it dried, they ate dinner and watched movies before crawling into bed like they had for years. They even fell asleep holding hands like they had as little girls.

The next day, Dee was up bright and early and eager to paint. She had Ari help her move the furniture around and drape sheets over it, similar to the forts they’d made as children. This wasn’t a fort for the two of them, though. Dee wanted privacy to paint: This new portrait would be a surprise. Ari had Dee help her fashion a tented area for her, too, and began to work on painting a background that she knew would please her sister: a road out of the woods into the wider world beyond.

For three days, the girls painted in their little tents. For three nights, they curled up in Ari’s bed like they always had and slept, so exhausted from their work that they did not need to tell stories, although Ari would have told Dee anything she wanted.

On the third night, Dee did speak after they’d turned off the lights. “I missed you, sister,” she told Ari. “Do you still believe in us?”

Dee squeezed her hand. “Meet me in dreamland, I’ll be waiting.”

“Not if I get there first,” Ari said with a sleepy smile. It was one of their favorite ways of saying good night and she’d missed it.

She fell asleep so quickly that she didn’t hear Dee whisper, “You won’t, but I’ll wait.”