A music video premiere, plus a chat about biker crews, depression, and saying yes to new things. 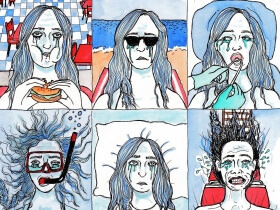 How Will I Live Without You? 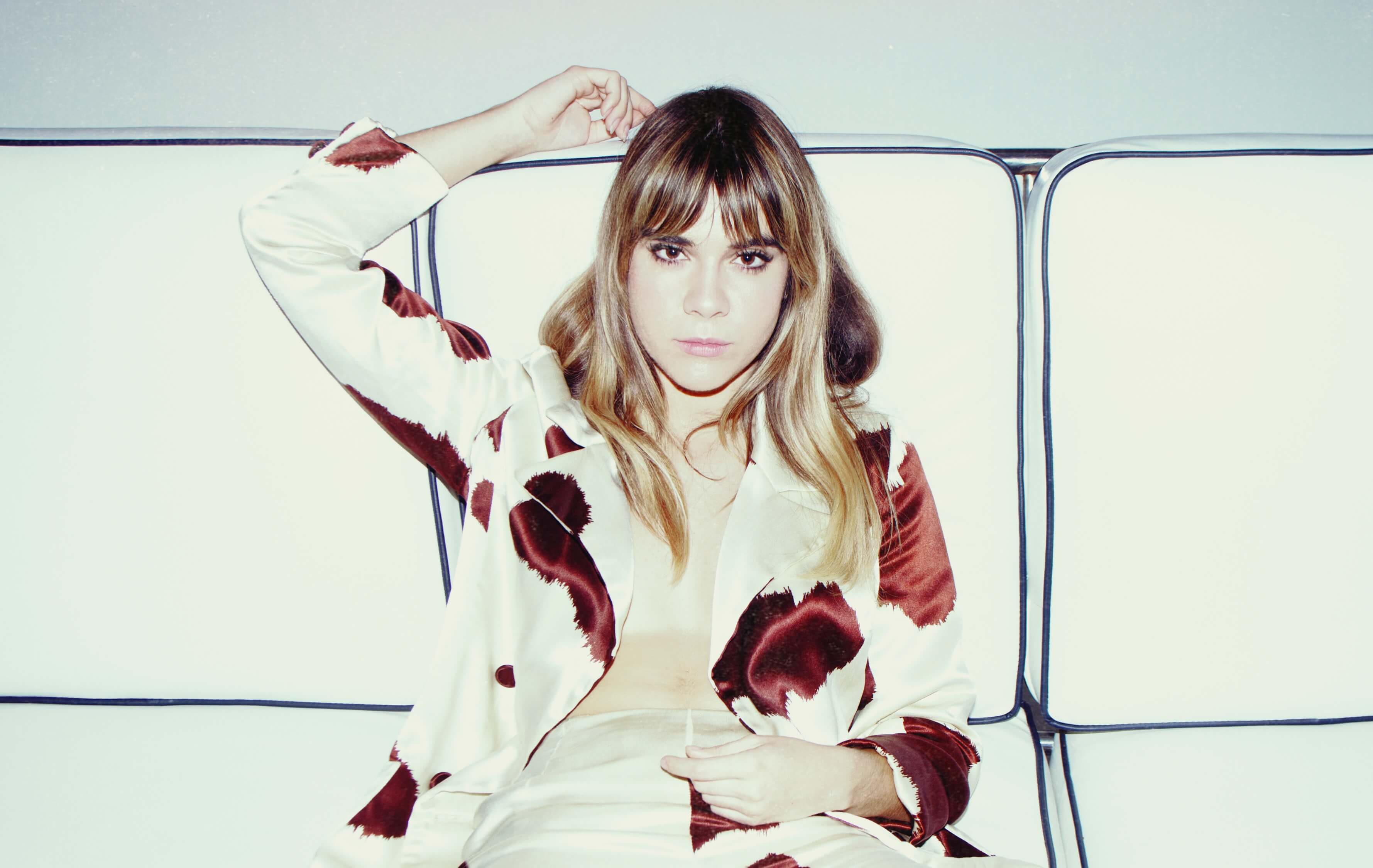 The Los Angeles-based indie-rock band Gothic Tropic is an always-adapting and transforming three-piece, led by multi-hyphenate founder and lead vocalist Cecilia Della Peruti. With her array of skills as a producer and songwriter, Cecilia has worked with artists including Charli XCX and BØRNS. Today we’re mega-excited to premiere the music video for “Stronger,” an anthemic single from Gothic Tropic’s forthcoming debut album, right here:

I recently had the pleasure of Skyping with Cecilia about getting uncomfortable, feeling silenced, and the allure of the video’s biker crew.

VICTORIA CHIU: What kinds of ideas were flowing through your head as you wrote the lyrics for “Stronger”?

CECILIA DELLA PERUTI: The line “You can’t turn the wheel ’cause you can’t steer,” for example, has to do with the idea of being afraid to say something that’s true because you’re bridled by fear, feeling nervous about asserting yourself. It comes out of working in male-dominated communities, I think. As a woman, I felt that I should always be easy to work with, which meant that a lot of the time I stayed silent when I maybe shouldn’t have. That line, and the song itself, says everything I ever wanted to say about being pressured to stay quiet that way.

But the content of the song also changes direction when it comes to the chorus. “When I’m out of the dark, you can always count on me” is about depression, for example. That’s about feeling like you’re hanging on by a thread right now, and nobody would be able to tell. But knowing that once you’re given a minute to sort out some basic stuff, you can get to the fancy tasks in life. It’s about managing expectations for yourself when you feel like you’re about to break in half. People may be asking normal things of you, and you understand that, but inside, your universe is going insane, and nobody has any idea that you’re having trouble, because you feel it’d be embarrassing to admit that you’re struggling with such simple tasks.

The video captures that interplay between the lighter and darker undertones of the track. There’s a kind of “rising up” feeling, even in the acknowledgement of struggle.

I think balancing the dark and the light of life is healthy and realistic. Sadness can be be funny, and humor can be horrible. It relieves some weight from each side—makes them more forgiving—because you’ve got more freedom to experience things different ways.

The music video is so punchy and aesthetically enticing, and the crew of female bikers have such distinctive personalities that come through in the video. Who are the official members of the “Stronger” biker crew?

I’ve known Audrey for over 10 years—we grew up in the same area, and she rides [motorcycles]. One of the other girls, Joy, has gone to school with me since we were eight, I’ve known her forever—she’s so funny and free, so confident. Anna is hilarious and kind of brash! My friend Kera is such a badass, she’s got her own band called Kera and the Lesbians, she’s an absolutely insane songwriter and performer. Jill has no idea how beautiful she is, it’s adorable! The whole time she was so self-conscious, and the rest of us were like, “No way, man!” She literally has no idea.

I wanted to find women that I’ve known or who are just awesome, and who own and fix and ride motorcycles. In the last few months I’ve been getting into the culture, and I’ve been learning to ride. I can go into…second gear? Not very fast! But I’m just beginning to learn about all these female biker gangs that exist. I was so scared of learning how to ride for so many years, it was just such a foreign idea to me. I constantly thought, “I could never do something like that.” But I eventually decided to tackle it because I love overcoming things I’m not used to. Then our stylist thought it looked cool, so we went with it for the music video.

The concept for the music video is a different version of something the director Erik Donley, who is also my boyfriend, and I thought of. Originally it was going to be us all fixing our bikes, riding out to a Gothic Tropic show, and the conflict was going to be a reptilian biker gang at odds with us. But all my dude biker friends were gone or working, so we simplified the concept. I think it’s better this way.

How did you make your way into music, and how did Gothic Tropic come together?

I started playing solo and with bands when I was younger, and after I’d been doing that for a while other people eventually just started recommending and referring me. There’s a huge, very interconnected musical community in Los Angeles, and that network is great for growth, especially when you’re open to going forward with opportunities that are outside of your comfort zone. I’ve said “yes” to a lot of things just because I don’t want to say “no” with the perspective that anything new is good for you, even if it’s uncomfortable and headache-inducing. It’s all productive, and it all helps you develop your skills and learn new techniques, and then that helps you come into yourself more, and figure out what’s “good” uncomfortable for you versus “bad” uncomfortable. And that’s related to Gothic Tropic’s formation, too—I came up with the idea while I was playing guitar for another band and realized I wanted and needed my own creative outlet, so I started this project just to get my ya-ya’s out. I started out playing by myself on the loop station, and it just kind of expanded from there once I found people I wanted to make music with.

Did you know your bandmates before forming Gothic Tropic?

It’s interesting, because the lineup has evolved since [the band’s beginnings in] 2011. I’d been seeing the first drummer, Liv Marsico, play jazz for a while in downtown Los Angeles before I started looking for bandmates, and I kind of “courted” her for the band. I didn’t really know her that well before asking if she’d like to collaborate, but I always thought she was incredibly cool and talented. She’s done percussion for Cold War Kids and other groups, [and has] always been into really cool-sounding stuff. She was in the band for a while, and I then I put the word out for a bass player. My friend introduced me to Daniel Denton, who became Gothic Tropic’s first bass guitarist, and he was in the band for a while, too. We stayed that way for about two years.

Then Liv started her own project, Liphemra, exactly the same way I formed Gothic Tropic. She wanted to focus a bit more on that, so we found Lia Braswell. I was kind of hell-bent on finding a female drummer, because I just think that’s so awesome. I’ll never be a drummer myself, so it’s kind of an enigmatic role for me. Lia and I had already known each other from playing in another band called Clear Plastic together. She knew I needed a drummer for Gothic Tropic and liked my music, so the two of us started collaborating. Then a while after that she joined Le Butcherettes, which kept her pretty busy, so my friend Rhys [Hastings]—who’s a dude—took over drums. Daniel eventually wanted to settle down a bit, got into real estate, and fell in love, so then we found Brad Bowers, who plays a lot with Sky Ferreira. He is insanely talented. I was really particular about the newer lineup as far as finding people who were really awesome to be around and nasty good players, and Rhys and Brad—they just school me. It’s great to have that challenge, and I feel like I perform better with people who are better than me—with that pressure. We’ve all been friends now for a couple years. It was all fuelled by the music, but encompassed by friendship.

Gothic Tropic has such a unique sound. Was that something you always conceptualized for the band, or did it arise from working with your bandmates?

The sound is an accurate representation of what comes out of me naturally without concentrating too much on what I produce. There’s the kind of songwriting where you’re hacking a bit at it, trying to creatively formulate successful tunes and songs you can sell, essentially, and then there’s the cathartic sort of songwriting where you just improvise and write what feels good in the moment. It’s been more of the latter lately, because that’s where I source a lot of my joy. I usually come to the guys [Rhys and Brad] with a pretty clear idea of of what I want, sonically, and we just play around with different parts together until we get the sound that works the best. Everything we’re making now was written almost entirely before I started playing with the two of them, actually—it’s all been the product of my brain excreting its natural essences…god, that’s the weirdest thing I’ve ever said. [Laughs] Everyone has a unique sound, but sometimes you can lose it when you focus too hard on making something “good.” I’ve been trying to preserve that uniqueness without smothering it.

That said, I’ve tried to refine the songwriting process a little more this year. “Stronger,” for example, was based on organic, naturally flowing ideas, but I knew where I wanted certain elements, mechanically. It worked out. I was able to make a song I liked without sacrificing any of that unique essence even while I was thinking about the nitty-gritty of it.

There’s been a ton of discussion for a while about Gothic Tropic’s upcoming debut full-length album, FASTorFEAST, but no official release date has been set. Do you have an idea of when you think the record might be coming out? I’d be super excited to hear an entire album packed with Gothic Tropic’s distinctive sound.

Actually, you’ve reminded me that I’ve gotta email someone about that! [Laughs] I’m finishing it one hundered percent this month, and it’ll be released sometime in the fall—October or November. It’s taking a little longer because I travel a lot as a touring and session player for other artists and so does the producer, so we’ve had very limited time to get the album done since we can only work on it when we’re both in town. But I tell people it’s done because it basically is! It’s more than half mixed, and mastering takes two days, so the 10 or 11 songs on the album will be totally complete very soon. ♦