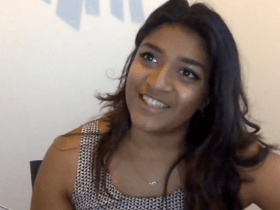 Upasna Asks: Why Do I Care So Much? 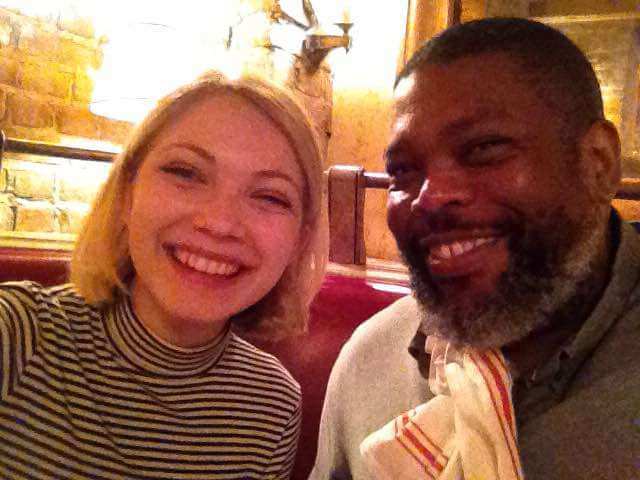 From our first lunch.

Hi, Rookies! July’s theme is SOULMATES. Not necessarily the romantic kind, but crucial heart-bonds of all varieties. This is expanded upon in all sorts of ways over at our Submit page, which you should definitely take a look at, as we would love to see any of your writing, artwork, et cetera, that this theme may provoke!

For July’s Editor’s Letter, I found the kind of love we’re talking about this month demonstrated in something I’d already written to introduce Hilton Als at the Lambda Literary Awards. The Lammys take place once a year to award contributions to LGBTQ+ literature, and for hundreds of people to share in a ceremony that celebrates queer lives and stories. I was so moved by the way Hilton spoke to this in his acceptance speech, which he has generously permitted us to include here as well. So, here’s what I said, and then what he said. In-between there was a very very long hug. It’s deeply gratifying to articulate and then share with people what makes someone you love such a remarkable person, artist, and friend.

Every time I’ve seen Hilton Als interview someone live, he’s gone out of his way to write a very in-depth introduction for them. Not just a bio or a list of achievements, but a thorough, thoughtful love letter that could be a New Yorker article all on its own. His articles feel like love letters, even when he’s not in love with the play he saw or artist he’s profiling. He’s interested in seeing where the flaws in the work may have originated, or what might cause his aversion to it. You don’t engage with something this deeply if you don’t love it, or love the world that caused it to come into existence.

This sweet spot where Hilton’s powers of observation meet his gigantic heart is what makes it hard to label his writing as simply “criticism.” Or, it’s where he’s made criticism so much more than assessment, but an act of empathy, driven by a need to understand the human experience through art, not as something that just happens to go on around it. He knows that you can never separate the art from the artist or the artist from the person, or any of that from the critic, or any of that from the circumstances we inherit with our identities. By contextualizing art within the lives of its creators and his own, Hilton uncovers larger truths about sexuality, gender, race, and all the ways in which we use art to find ourselves through, or in spite of, these facets of identity. Nothing exists in a vacuum; it’s all part of the same tangled constellation.

Consider his piece for Harpers where an interview with Prince blurs with Hilton’s revelation about a former partner. How often do we get to know how the interviewer felt about their subject in this way? Not if the pop star seemed manufactured or legit, or what they ordered at the restaurant during the interview, but what emotions, colors, memories of past lovers they conjured up in the writer, as in the experience of listening to a song? That the writer was falling in love with and getting their heart broken by the oblivious Prince over the course of a couple hours? That the reasons for this were so much more complex than the celebrity’s charisma most profiles concern themselves with? In Hilton’s work, everything is personal, and the personal demands to be felt, not simply analyzed.

Hilton, we had our first date the same day as my first date with a new love interest. I told you I’d stopped writing. You aptly observed that this was because I thought I had to mute my individualism to feel a part of something. We did Thanksgiving together that year, you and me, and you asked halfway through if I wanted to invite him to join us, and I said no, because we were having too much fun and I couldn’t imagine him or anyone adding to it. You said, “I’ve been waiting my whole life for a girl to not invite her boyfriend!” I wrote thousands of pages about that boy by starting them all as emails to you, because your supportive ears could trick me into forgetting I was performing the dreaded task of writing. I’d tell you the latest drama, and you’d say: “All that matters now is the writing.” Writers have a bad rap for putting the writing first in a way that shows apathy towards the people in their life, but that’s not what you meant—you meant that writing is how you and I live, and synthesize everything we learn, and that the only thing that mattered now was growth.

Two years after that first date, I see you were my love all along. It was really hard to write this and feel confident in it without getting to send it to you first, but I hope it could show you something of what it’s like to hear you give one of your stunning introductions to someone you admire as much as I do you. Thank you for this love, and for everything you’ve gotten us readers to think about and feel through your writing. Congratulations on receiving Lambda’s Trustee Award. I am in awe of you.

In a piece about the poet Eileen Myles that appeared in The New York Times in January of this year, it was reported that when the director Paul Weitz talked to Eileen about her work and showcasing aspects of her life in his film Grandma, Eileen said: “Am I going to be some old lesbian sitting on the porch scratching her balls? Because that’s kind of embarrassing.” I understand how she feels. As an old lesbian who frequently scratches his balls, I’ve grown accustomed to being embarrassed, especially since it’s an offshoot of the powerful feelings that rise up in me as I stand before you, the beyond humble and grateful recipient of your love and attention. I am generally not very good at being the subject of anything, other people are my art, but I am learning, and, in any case, it’s only fair that I be the focus of your attention now since for so many years you have been the subject and the object of my deepest concerns, folks I don’t know by name but I know through being. My bones are your bones. This ceremony feels like the culmination of a conversation I started when I was a teenager and first met you, complicated survivors from various ruined or misunderstanding kingdoms, tripping along Christopher Street in your version of a crown or a cape, first laughing, because we were young and not full of sorrow and then not laughing because the atmosphere was then filled with our AIDS dead, our murdered dead. Those are the pivotal events of my life—first that freedom and laughter and then not, my free body and then not. But in recent years the atmosphere has begun to be filled with other things, such as the reality that I was alive, the ultimate privilege, really, and, as James Baldwin told us, the trick is to say yes to life. So, now I say yes to life, and I scratch my balls as I thank you and friends who have brought me back to life, including Brent Sikkema and Thomas Beard and Tavi Gevinson and Evans Richardson and Girl Nico and Sufjan, and Christopher and Mitch and Evan James, young people so full of life who are now, like the rest of you, in my heart and my bones, along with the woman I would like to dedicate this honor to—my late friend, Valda Zaiga Grinfelds Drabla, a more or less straight woman who came to every reading I ever gave while she was alive including one at the Gay and Lesbian Center on 13th when she was the only person besides a young drunk queen who showed up. Valda was a grand and great friend of this community, and as a matter of fact she did scratch her balls a lot, especially when she came to hear me read. Indeed, at my first reading she sat in the front row, eating a hoagie, and then, after the reading, she told me I needed more stuff behind me when I read—“maybe a video?” That’s the kind of thing that keeps you real, along with your love. Thank you. ♦