Stories behind the powerful photo from Baton Rouge, Louisiana. 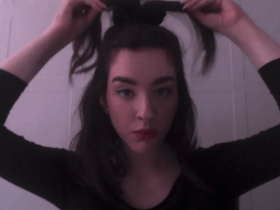 Good morning! Get ready for Tuesday with this edition of Daily Links…

Collage by Ruby Aitken, using a photo by Jonathan Bachman via The Atlantic.

Jonathan Bachman—the photographer who took the viral photo of Ieshia Evans, an unarmed black woman standing peacefully in front of fully armed police at a protest in Baton Rouge, Louisiana—spoke to The Atlantic to describe what he saw.

Disney XD and the YouTube channel Bad Lip Reading dubbed the classic movie High School Musical. The special aired on Disney XD, but you can check out (hilarious) sneak peeks like the one above on YouTube.

Watch Amandla Stenberg, Grimes, Lola Leon, and Kenya Kinski-Jones ride a jacuzzi convertible into the desert in this new commercial by Melina Matsoukas advertising POP, a fragrance from Stella McCartney. ♦