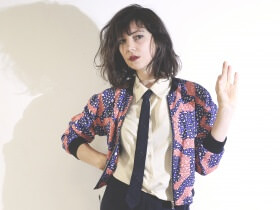 I make you listen to bands all the time. A lot of the recommendations were for my own nefarious purposes, but Twenty One Pilots was a band we could both get behind. Maybe we’re really deep thinkers, or maybe we’re just sad. Who knows what the artist originally intended the song to be about, but, to me, “Trees” is about you. Let us take a look at some of the lines:

I want to know you/ I want to see/ I want to say hello
You told me you thought I was cool in sixth grade, because I wore lots of sparkly bracelets and a purple vest on the first day of school. I really wanted to be your friend, because I thought you were the one with the cool clothes. Frankly, neither one of us were very popular, but I thought of your outfits whenever I went shopping and specifically bought a pair of pants with you in mind. I said hello, and we became friends.

I know where you stand/ Silent in the trees/ And that’s where I am
In ninth grade we were together all the time. It was inevitable, since we we had almost all of the same classes. I prefer to think it was destiny. I had panic attacks in a class we shared every week, and you didn’t know. You couldn’t help, but I knew that the thing that was bothering me the most was also bothering you. We didn’t talk about what was hurting us, but at least we were stuck in the same place together.

Why won’t you speak/ Where I happen to be
In tenth grade I started to ask how you were. It became sort of a ritual. I wanted to make sure you had a chance to get things off your chest, and I knew after you were done I would get a turn. I think that’s when I realized what a best friend meant. Until then, I didn’t understand that sharing your experiences with someone could be an automatic response. I can’t take everything on my own, and I don’t want you to try to either. I’ll keep asking you how you are, so that, if you want, you can tell me. I won’t always know how to help you, and you won’t always know how to help me, but we made it this far…kid.