Celebrate best pal-dom with an homage to a friend. 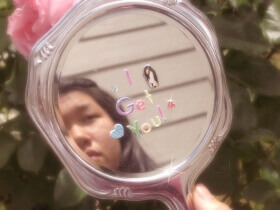 In a land found only in dreams, there existed a kingdom that relied on the fastest, most reliable mode of communication. No wires, screens, or electricity were involved.

All throughout the kingdom, buckets of bubble solution sat around houses. Stores filled with bubble solution, bubble containers, and all sorts of bubble wands could be found on each corner. Even the king and queen themselves used it to communicate with neighboring royalty, who had learned of their neighbors’ unusual ways. They listened to the bubbles, but replied with letters. Letters were used throughout the city, too, but only because the distant friends and family could never figure out how to use the bubble system.

To the citizens of that bubbly kingdom, it was so incredibly simple. Place the bubble wand in the solution, and hold it up. Don’t blow. Say your message, length doesn’t matter. Once you’re ready, blow the bubble while thinking of who you want the bubble to go to. Be careful so it doesn’t break or else you’ll have to redo your message. Let your bubble float away, once it pops, it’s been teleported to the person you wish to see. It’ll float for a few moments until the receiver pops it or until it reaches the ground. So easy.

The people loved the bubble messages so much. You can hear the passion, anger, or grief in the messages, which the citizens really adore. It was fast and convenient, there was nothing like it. Whenever a loved one went out of town, a bottle of bubble solution and a wand went with them. Everyone else called it magic. To the kingdom’s people, it was no big deal.