A spontaneous art adventure on wheels. 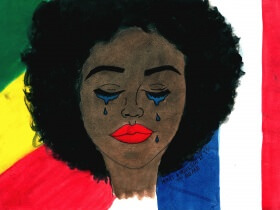 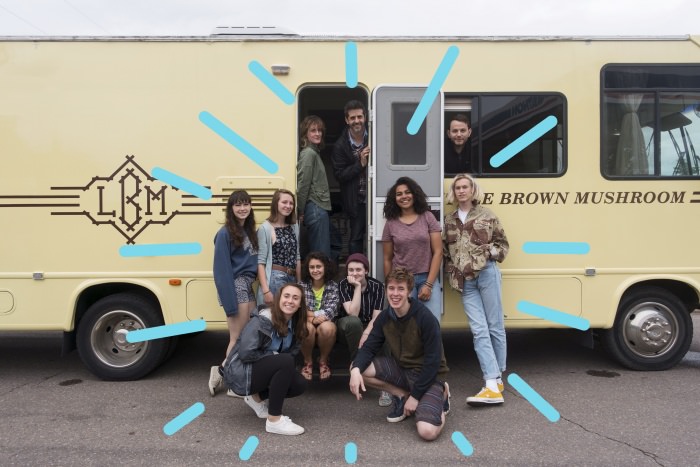 Group shot of the Winnebago Workshop attendees and staff. Zophia is on the far left.

I’ve never really liked structure. The only way I know how to create is by being spontaneous. I’m a photographer and an artist, but on a given morning during the Winnebago Workshop in St. Paul, Minnesota, I probably won’t know where I’ll be or what I’ll be up to until just hours later. That uncertainty is what made me decide to apply.

The workshop, founded by photographer Alec Soth, is an art and storytelling program centered on letting young artists and writers experience the world and broaden their creative perspective through travel. At its core, it consists of an RV (recently painted yellow and in the process of getting decked out), eight teenage artists (including me), teaching artists, and a whole lot of spontaneity. We have dates set for when we meet and when teaching artists are booked, but other than that, there are no plans laid out in advance. On occasion, the group has literally blown a dart at a map to decide where to drive to that day.

The workshop’s first full term is currently underway. There are three weekends, one week of day trips, and a two-week summer road trip ending with our only planned destination: New York City, where we’ll host a pop-up exhibition and work with the Museum of Modern Art’s education department. But after just two weekends, it’s shaping up to be an adventure like none I’ve experienced—it crams a lot of discovery into a very short amount of time.

After an intro session at Alec’s experimental publishing studio, Little Brown Mushroom, we grab camera equipment and head to the RV. It’s not ’til we board that we even begin tossing around ideas of where to venture to. With Alec’s dog, Misha, trotting back and forth through the Winnebago, we cram into the seats and eventually agree on Hudson, Wisconsin, after people suggest the names of a few towns nearby. It’s about half an hour away, not too small, not too big, and none of us had been there before. It’s a perfect fit.

After some brief Yelp research, we park a few blocks off the main drag and head to a German restaurant in the basement of a building for lunch. This is an adventure since I’ve never had German food before, though in the end I could probably live without it (turns out it does not cater too well to vegetarianism unless all you ever eat is onions and potatoes). Our reviews of lunch may be mixed, but just hours into our time together, the whole group is talking with an enormous amount of familiarity. We’re around people who get us, people who second our passion for creativity and our penchant for the adventurous. We talk about school and shared interests ranging from photography to the environment, but the connection seems to go beyond that. The group just clicks immediately, perhaps on the basis that we’re all anxious for the experience to come.

Inspired by our lunch locale, Alec suggests that the day’s project should be to find other interesting basements around Hudson. We split into three groups on foot and check out some pretty obscure places: antique stores, the cellar of a private residence (with permission from the owner), the basement of a Messianic Jewish temple, a cave once used for making liquor during prohibition, and an EMT dormitory. 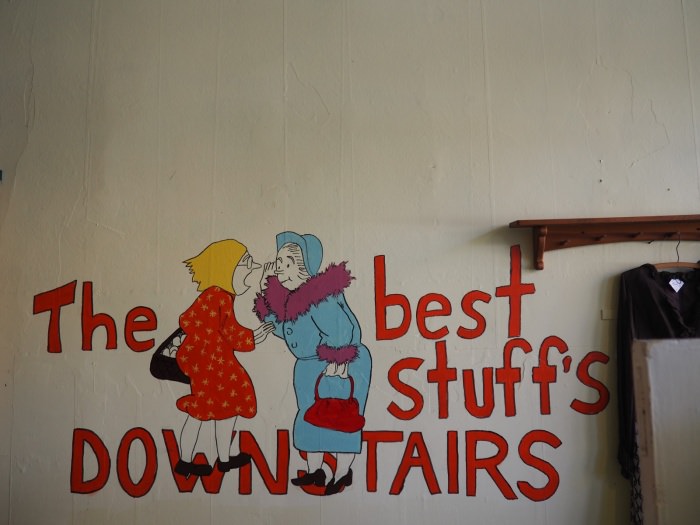 At an antique shop. Photo by Chloe Peterson.

Each experience forces us to leave our comfort zones. In order to photograph the spaces and the people we come across, we have to approach strangers and remain confident, something new and relatively daunting to all of us. But it surprises me that most people we approach welcome us and are eager to talk about their lives. 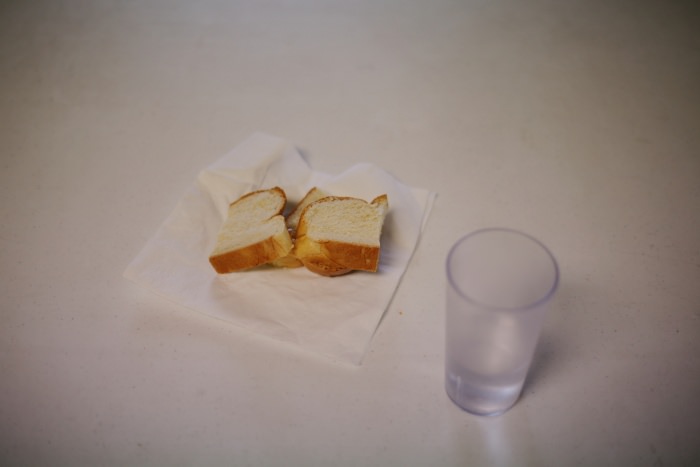 In the basement of the temple.

We learn stories from the people we meet. I learn about Messianic Judaism, which I’d never heard of before. Other groups learn about life as an on-call emergency medical technician, or why the local liquor store owns a cave. And we all take those stories back with us through our images, making our first day together long and successful.

The weather is less cooperative Sunday, so we choose to spend most of the day at Alec’s studio in St. Paul. We sit around a ping-pong table, first looking through the photographs we took on Saturday, then narrowing down our crop of images to a number suitable for an exhibition. Alec starts a discussion about what we might want to do for the next workshops. Someone suggests reserving that cave back in Hudson as space to host a basement-themed pop-up show. Alec’s assistant calls to see if we can next month. 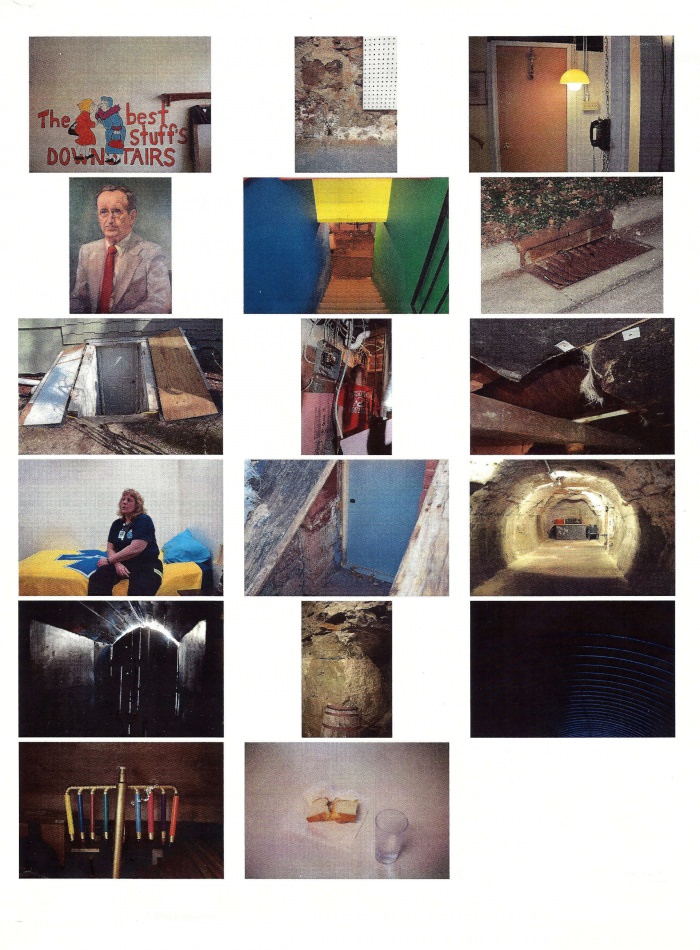 Contact sheet of our best images from the weekend.

Sunday’s main adventure is an RV drive from the studio to the Midtown Market in Minneapolis for lunch. The bonding time meals provide is worthwhile, and so is a trip across town for good falafel.

Everyone is involved in the decision-making within the workshop’s planning process. Each of us is free to shout out ideas and weigh in on the suggestions of others. One of the workshop’s goals is to allow us the kind of freedom not typically given in classrooms, and this translates to every facet of the experience. Having that freedom is strange at first–I freeze and don’t know how to guide myself–but working as a group makes it easier to adjust to. And it’s awesome not getting talked down to by the people in charge. “I love the way that everyone is respected as an adult,” Chloe, another attendee, says. It makes the environment feel truly collaborative between everybody—teens and adults alike—as opposed to the typical power balance found between teachers and students in school.

The weekend’s goal is to explore written storytelling, since photography dominated the last workshop. Alec brings in two MFA students as teaching artists. They introduce themselves and their work; we grab coffee, then we head out into an unseasonable chill. We drive north to Fairbault, Minnesota, where we begin our search for stories at the public library. We sift through records, worn out books, and slides of decades-old newspapers. Quotes and names of authors capture our interest, as well as talk about how the town was once well-known for its schools for the blind and deaf. 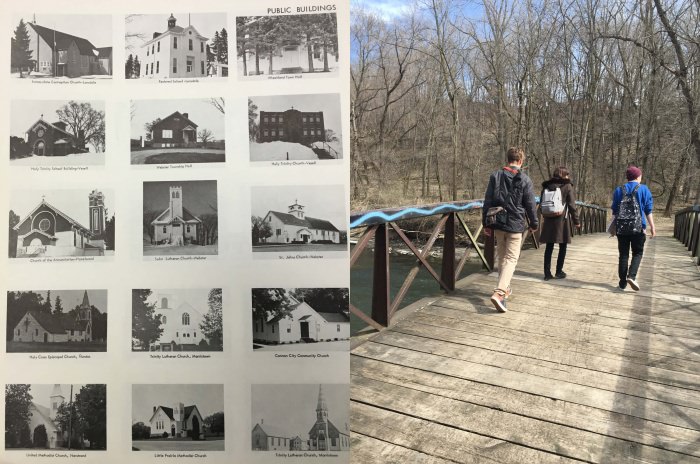 We split into groups again and wander off, but it seems the cold, windy weather doesn’t lend itself well to people being out and willing to share.

We make our way through a pawn shop, a bodega, and several streets, keeping in mind a theme of change that one of the writers suggested. I take pictures, but when it comes to ideas for writing, I come up relatively empty-handed. If the other students feel differently, they don’t express it much.

The next morning, we drive back to Fairbault, counting on warmer weather and a more successful trip, both of which we get. We take a short hike through a forested park and a tunnel to reach an old mental hospital with its windows boarded up, a landmark we had found scouring the internet. On our way there, I’m afraid we’ll have to climb through a dark, wet pipe to find it, which freaks the hell out of me, and makes me wonder about the degree to which Alec is legally liable for anything bad that happens to us. But the place turns out to be atop a hill in open air, and some local teenagers tell us it’s a well-known hangout spot, albeit not one for the faint of heart. They say sometimes there are parties in the abandoned building, and, unsurprisingly, that people claim to see ghosts there.

We hang around discussing and photographing, ’til the world’s chillest guard from the prison nearby appears and tells us that, well, we can’t be there, it’s kind of illegal. But he stays for a chat before we climb back down the hill. 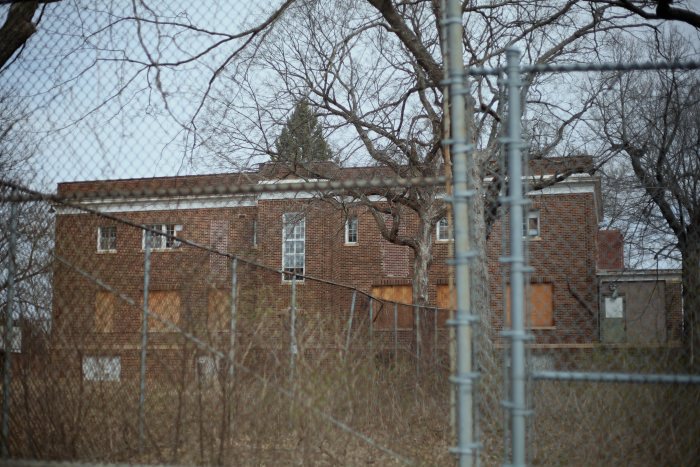 We have downtime in the park to write. I lay in the grass and watch everyone around me write, but I’m daunted. When it comes time to share, I just listen. 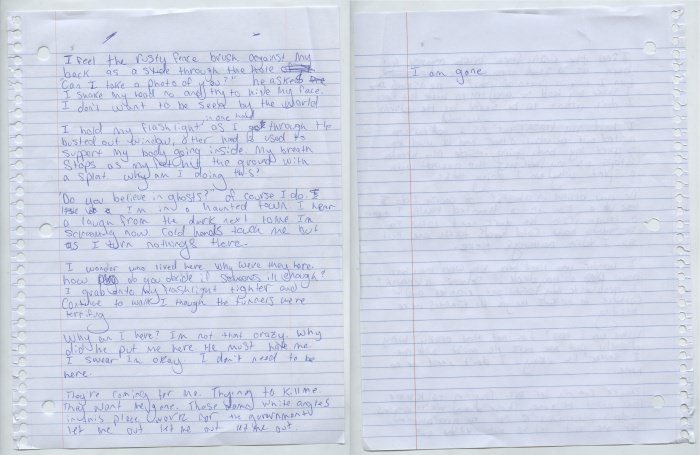 There are a few standout pieces among us, like Shawn’s, but most of the people who wrote are too anxious to share their work. The MFA students tell us it’s like that even in grad school. For a group of primarily visual artists, it turned out that writing was much harder than sketching or setting up a photo. But I’ve had the same artistic medium and process for a long time: walk around, find an appealing scene, set up the camera, snap a picture. And I realize that eventually I need to push myself way out of that box in order to grow artistically, even if it makes me uncomfortable at first. I should try to write, draw, and find inspiration in new places. Brooklyn told me she’s experiencing something similar. The workshop is leading her to consider trying different types of art because, in the past, she’d only done photography.

For me, the biggest change has less to do with the art I’m producing–it’s that I listen more. Suddenly, I’m in unfamiliar territory, dealing with new ideas about art and the creative process, and I have nothing to shout out like I typically would when the teaching artists ask us questions. Instead, I sit quietly and try to make sense of everything I’m learning.

Brooklyn and Chloe have both said they’re interested in pursuing creative careers after just two weekends, and Shawn, who initially expressed confusion as to why he was selected for the workshop, is now more confident in what he can do. “The biggest thing is that I found out that everyone is an artist, they just have their own medium,” he says. “I am now starting to see that I am an artist just like everyone else.”

I don’t have a clue about what we’ll be doing the next time the workshop meets. But I know it will grow with us and push us at the same time, sure that there’s always room to learn. The Winnebago Workshop is constantly evolving, just like we are. I’m still wrapping my brain around everything that’s happened the last two trips and all the new information bouncing around my head. But bring on more of it–I’m ready now. ♦

Zophia Dadlez is a 17-year-old photographer from Minnesota.