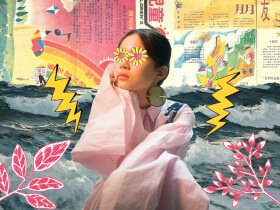 5,000 km Per Second
Manuele Fior
2016, Fantagraphics
Manuele Fior’s graphic novel 5,000 km Per Second finds meaning in silence. The story’s twists and turns, its peaks and valleys, are not explained, but left for the reader to put together. The book follows two main characters, Piero and Lucia, as well as their third wheel, Nicola. It quickly jumps through their stories, and leaves a lot to the imagination. Rather than words doing the heavy lifting, the illustrations convey information such as the timeline and the characters’ geographic locations. Drawings of raindrops indicate transitions in the narrative, including the climactic scene, when rain falls on the characters. Piero, Lucia, and Nicola’s relationships are characterized by purposeful silence or its opposite: We learn that certain characters have fallen out of touch, which necessitates more chatter, or worse: long pauses that result in the end of friendships. Fior’s trio haphazardly stumbles through their relationships, and his piecemeal storytelling conveys just how confusing human connection can be. —Rachel Davies

Get In Trouble
Kelly Link
2015, Random House
A lot of writers specialize in making the minuscule extraordinary through observations and details that are normally overlooked. Kelly Link does the reverse in this collection of short stories: She creates entire worlds and draws you in through their immersive, extraordinary powers. A master of magic realism, Link creates characters that casually react to their surreal surroundings, and allows them to get messy and make mistakes (as the title suggests). The premise of each story is so original and fully realized that I craved an entire novel based on each one. My favorite tales made me feel like I was left to fend for myself as I tried to figure out what, exactly, their realities were based on. Topics include, but are not limited to: robot-ghost boyfriends, a house inhabited by “summer people” no one ever sees, pocket universes, magic spaceships that bring ghost stories to life, and catfishing superheroes on the internet. If you are looking for a book that provides a means of escape, let Get In Trouble grab your hand, Taylor Swift-weekend-getaway-style, and don’t let go. —Emily Wood

We Have Always Lived in the Castle
Shirley Jackson
1962, Viking Press
Girls who were the first few I knew who really “got it” (“it” being off-ness, the knowledge of something that is too much to put into a few words) introduced We Have Always Lived in the Castle to me. The book was part of my induction into a world that shared the strange aura and small, unsettling details of my own. I knew from the chills the cover gave me that I had found something worthwhile. Without giving too much away: The story focuses on the Blackwood family-marred by tragedy and existing in isolation-and the trail of specters they leave behind. The main character is 18-year-old Mary Katherine (Merricat), and I would be lying to myself if I didn’t think she was my reflection five pages into the book. This was Shirley Jackson’s last novel, a final ode to exploring everyday evils and persecution. It made me think that maybe evil isn’t banal after all. —Britney Franco ♦