Transform the stories that shaped your childhood. 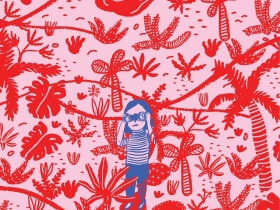 It really was the time where anything could happen.

It all started on a Saturday.
Coimbatore to Ahmedabad, a 35-hour journey. It didn’t matter, we were together, we would never get bored.
Spreading peanut butter on bread with our fingers, sitting at the open door of the train and watching the Indian countryside, feeling the wind in your hair, making your bed and trying not to hurt anyone because it is so small up there, watching movies and falling asleep softly. A day in the train, a day just between us. I could just lay my head on your shoulder and be safe.

We finally arrived. Late at night, alone in this hotel. We laughed so much that night.

And then, it was like this every day. Every day during three weeks.
It was lying down in the bus when you couldn’t fall asleep, it was wearing somebody else’s clothes, it was hanging out in anybody’s room and stealing a bit of food.
It was having trouble making our beds in the sleeper trains, it was having somebody next to you when everybody else was sleeping and chatting till he was falling asleep.
It was writing a few lines on a piece of paper one night when you had tears in your eyes and making a friend read them.
It was sitting down in the middle of the railway platform and learning a few words of Farsi.
It was fighting on a bed, dancing on a bed, it was trying to feel warmer under the blanket after a day in the snow.
It was these new words that you hear and that you use now.
It was visits under the sun, this endless walk around the fort.
It was the bus rides, where childish games started, where bodies danced, where we slept, so close to each other, where we sang, often really loud, often really out of tune.
It was these little shops where we bargained, speaking French between us to help each other get good prices.
It was the streets in which we were walking in a group, in the middle of this crazy traffic, in the middle of all these people.
It was the stop for a lassi, a milkshake, or a samosa, it was this food that we all love and share.
It was the time spent sitting on the steps facing the Ganga, where we didn’t really talk but where everything was right.
It was discovering the palaces, the forts, the temples, it was these names of cities always changing, always a new place.
It was lying down one night in the fresh sand of the Thar Desert and watching the stars, speaking softly.
It was sleeping peacefully in a tent watching the others play volleyball and knowing that you will have to say goodbye to them a week later.
It was this seat number written on my hand with blue ink before each train journey.
It was going to the bathroom every morning and discovering how dirty it was, but you didn’t care, you threw the cigarette butt in the dustbin and you sang the song that you could hear through the wall.
It was the restaurants where you spent long minutes analyzing the menu to finally order chili paneer and a mango juice. These restaurants where we were too loud, where we complained about the food quality, restaurants who disappointed us and those which, after a walk under the rain, welcomed us with a few pakoras and a hot milk.
It was these plans that we were already making, that we were thinking about in the middle of long bus rides. A week of holiday together. A weekend in Munich together, drinking beer.
It was this corridor one Monday, full of flags, pins, and visit cards. A corridor full of tears and feelings. A corridor where suitcases were piled up in a corner. A corridor where everybody was trying to hold another person really tight, a person that he will miss really soon. A corridor where hands were hiding faces, where you heard a loud sob behind a closed door. It was an awful corridor and yet, it was so full of love.
It was a corridor that you didn’t want to leave, because you knew what it meant.

One night.
The bangle span on my bare sternum.
I got up, I closed the window.
I can still see this peacefulness, this night which seemed long and deep. The girls were sleeping, I covered myself.
My body was white, so white.
I know that we laughed, that it was the same words, the same talks.
The blanket was heavy. I felt the need to breathe, to not sleep for a while.
I had said that before: “I don’t want to sleep, not now.”
Voices were the same, too, more fragile, more holy, too.
Upstairs, everything was quiet. “Everything is quiet, a vast quietness.”
Only glimmers. Only shadows.
Only our faces, our lips, our voices.
Only this blanket on me.
To not see my body. Just talking.
For once, being honest with myself and with somebody.
Everything felt right again.