“We can’t become free until we help the most oppressed members of our community.” 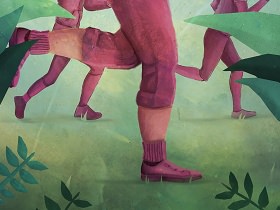 Liberation can seem so unachievable and far away at times. Do you ever feel that way, and how do you get out of that spiral of despair and doubt?

How do I get out of it? Honestly I don’t think it ever stops, it doesn’t. But one of things that I do to help keep going is looking at my son, and envisioning a life [that] I want him to live, and knowing that I would do anything in my capacity to make sure that he’s OK. That helps me get out of that depressing state. Also, I have to watch cartoons every now and then because shit gets too real! I don’t watch the news because it’s too depressing. I feel like I take on the emotions of the world at times. That’s why I’m too nice, because I take on too many emotions at one time and too many different energies. It gets to a point where its just like, “Well shit, I’ll be nice, OK.” I think that if I’m nice, everybody else will be nice, and if I’m helping somebody, somebody will help the next person, or they’ll help me.

There are points when I don’t think it will ever end. This world is just so fucked up, and at times I don’t think this fight will ever end. But if I keep that negativity present in my mind, I’ll become a bitter person. My goal in life is to never let this world change me, so that’s something else that gets me out of that pessimism—always trying to remember that I will not let this world make me into a hard, bitter person. This world is not going to chew me up and spit me out and leave me as this hurt person, because that’s what the world has been trying to do to black people century after century. That is what this world does to us all the time, and if I allowed that to keep happening then we’ll never get free. I know this movement is supposed to be about everyone working together, but one person can be the end or the beginning as well. Not saying that the movement is riding on me, but it’s like death: Many people think that when someone dies, their pain is gone and everything’s good now, when in actuality, if that person is no longer there, other people die as well. They no longer have the connection that made them happy, that person to talk to, and that’s why a death ripples throughout the community. That’s why we’re still fighting police brutality, because with each death, there’s a ripple effect because we see ourselves in those people.

How do you feel about older generations’ critiques of the current movement— suggesting that we need one specific leader or that we don’t even know what we’re doing, especially since BYP 100 is made up of millennials?

My response to that has been the same for a while because I have to have these conversations with my parents, who were born in the early ’60s. I always say the stakes are pressed up against us right now, and it may not be as covert as it was back then, but I think that’s the issue. I also read this quote on Facebook that says you can’t be doing something wrong if people don’t know what you’re doing. So by older generations saying that we’re doing something wrong, I think it’s due to the fact that they’re so scarred from the past Civil Rights Movement. They’re afraid to get to that next step. I think the older generation has just been beaten down so much that they’re now afraid to really help us, and it’s understandable. But we not finna sit back, ain’t nobody finna keep pushing us around. That’s how we feel. The more we educate ourselves on the oppression that we’ve been facing for centuries, the easier it becomes for us to continue this fight. James Baldwin said, “To be [black] in this country and to be relatively conscious is to be in a rage almost all the time.” That’s what we’re in—a constant state of rage, because we know so much, but nobody will listen. I don’t think we’re doing it wrong, and I don’t think we’re doing it right either. We’re doing it in a way that allows us to be ourselves and to be proud about being ourselves, and I think that’s what’s most important about this movement.

How old is your son?

He is five. He’s one of those weird, bright children. Not weird in a bad sense, in a good sense. I like the word weird. [Laughs] He’ll be skipping kindergarten and going to the first grade.

Aww, so he’s a smart kid! How does being a mom contribute to being an expert on your own experience, and what does that mean to you?

How I see the world, and how I’m able to communicate with people. That is how I am expert in my own experience. It’s also being a mother and trying to have a conversation with people who don’t understand the struggle of being a parent, but still want to criticize parenting styles and young mothers. A lot of the time, people don’t know that I have a kid. So people just say crazy things, and aren’t aware that they’re also talking about me. I remind them, “Did you know I’m a parent and I had these problems but I made it through?” You can’t continuously generalize people because that’s not gonna help us win. That’s actually how we lose.

For example, when we were trying to save Chicago State University, we talked about divesting from police and reinvesting it into education, and into daycare centers because CSU has a lot of students who are single moms. A barrier to getting your education is having childcare, because there are some professors who allow you to bring you child to class, and you have some who will say no. Some schools have on-site childcare, which is very rare, and others don’t, or it’s only for employees. Being able to also focus on childcare and how it can be inaccessible is what makes my experience as a parent so important. I’m not an expert parent—nobody is—but that’s part of my experience living in Chicago, that I’m able to speak on that and bring a different perspective. That’s what makes the movement complicated yet beautiful and productive at the same time. With all these different experiences, we learn that black people aren’t all the same. Too often mainstream society generalizes us, and that’s how they try to keep us subservient to them. The fact that all of us have different talents and modes of thinking, that’s what it means to be an expert of your own experience, because you bring what you have to the table without it being about how much money you have or your status. You’re just bringing your lived experience and values. Some things do get checked for being problematic, but it’s also a space to learn as well, so you’re never stagnant in your experience.

What does it feel like to see black women at the forefront of the movement with things like Say Her Name?

Seeing that gave me another sense of pride. I finally felt as though black women will no longer be silenced. Our deaths and kidnappings would no longer be dismissed. It told me that I do matter and that [female victims of police brutality] matter. They may no longer be here, but their voices are still being heard. That’s what it meant to me—to know that God forbid something happen to me through state violence or inter-community violence—there will still be people out there fighting for me to get justice. We have to also understand that we can’t become free until we help the most oppressed members of our community, which is the black woman, the black femme, and the black trans community.

What do you do when people try to politicize your life and forget that you have a life outside of activism?

You know there are random times when that happens to me. People look at me like I’m crazy when I say I want to do a certain fun thing, and they’ll say, “Hold up, aren’t you a black power activist? Doesn’t that activity go against your morals?” And I’m just like, “Damn can I live? Let me be!” I have to remind people way too often that I am an individual and a human. I need to also have opportunities where I don’t have to be political. I mean hell, being a black woman is political in itself, so I could just breathe and I’m political. I don’t think we can ever turn off our political-ness, but we can check out of it. I think the other thing is that political-ness is imposed upon us. Even with our hair. People see my afro and automatically think, “Oh she’s a radical,” when really you just like your hair that way, you were just being you. Even if we weren’t activists our identities as black people would still be politicized. So for someone to try to police what I do outside of politics is just them imposing their political idea on to me. It’s not fair. That’s also the burden of being a part of black liberation. People expect you to know everything when you are still growing as a person. ♦