A short story about saying no to the Prom Industrial Complex. 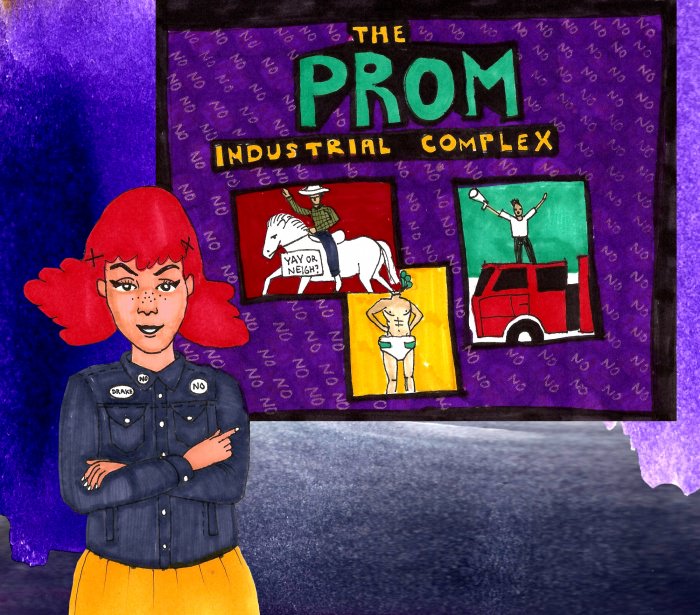 The Spognardi brothers were known for being exceptionally good at asking girls to prom. Students and teachers of Central High School alike spoke reverently of their legendary promposals for years after, as if they recalled bearing witness to a game-changing touchdown in a football game’s final moment.

It all began when the oldest brother, Donny Spognardi, stole a horse from a local stable, taped a sign to his chest that said, “PROM: YAY OR NEIGH?,” and rode straight into the cafeteria.

“I’ll never forget it. It was on a Taco Tuesday…” lunch lady Marilyn Winter would wistfully remember whenever a curious freshman inquired about the truth of the legend. And with each brother that matriculated to 12th grade, the promposals’ intricacy increased.

Two years after Donny graduated, Jimmy Spognardi dressed up as a newborn baby and hid under the teacher’s desk in his date’s homeroom before anyone got to school. He convinced his best friend to costume himself as a pregnant woman, while another friend, dressed as a doctor, frantically pushed him through the halls in a wheelchair screaming, “Lady with a baby coming through!” Once they burst into the classroom, the friend lay across the teacher’s desk, mimicking birthing pains, until Jimmy popped out from underneath and announced, “Diana, I was born to go to prom with you!”

Usually a person wearing nothing but an adult diaper would seem disturbing, but Jimmy was so handsome and muscular no one seemed to mind.

After Jimmy, it was Doug Spognardi’s turn. By this time, lots of other boys at school were attempting elaborate promposals of their own. One early March morning, long before Doug had even begun preparing for promposal season, he heard a rumor that another boy was going to ask the girl of his dreams, Stacy MacDougal, to the dance by getting a pizza delivered that afternoon to her fifth period gym class with “PROM?” spelled out in pepperoni.

Incensed that his peer would even have the gall to ask Stacy to prom with such an amateur technique, Doug courageously pulled the fire alarm just as fifth period began. With the entire school lined up in the parking lot, he jumped into the cab of the fire truck and grabbed the microphone attached to the siren speaker.

“STACY…no, not that Stacy…STACY MACDOUGAL…Sorry, I pulled the alarm,” he shouted as the firemen tried to pry him from the truck. “But, Stacy, you’re so hot, you’re ON FIRE, so let’s…BURN up the dance floor at PROM?”

Stacy fainted right there on the pavement. But when she awoke, she emphatically said yes to Doug Spognardi’s promposal. Girls always said yes to the Spognardis. The brothers never faced administrative punishment from the school for these grand romantic gestures because of what some would call their Nice Boy Charms and what others would refer to as their white privilege.

Now the youngest brother, Tim Spognardi, had reached the spring of his senior year. The pressure for him to make the ultimate promposal was mounting. Girls began to pay attention to him, desperately wanting to be on the receiving end of what would be the last of the historic Spognardi promposals. As though taking advice from a magazine article entitled “How to Get Him to Notice You,” they touched his arm when speaking to him and put fragrance in their hair so that he’d get a whiff of them when there was a light breeze. Unfortunately for them, the only thing Tim could smell was the overwhelming scent of Axe body spray he self-consciously applied to himself each morning. Plus, their efforts were futile anyway. Tim only had eyes for one girl.

“She’s in my social studies class,” Tim would tell his brothers when they asked him who he planned on asking to prom, looking off into the distance with a sudden sparkle in his eyes “She’s…not like the other girls. She, like, reads books and stuff.”

Indeed, Violet Brown read lots of books. And stuff. Including assorted conspiracy theory blogs that inspired the presentation she gave the following Monday.

“The Prom Industrial Complex is capitalism at its most deceitful,” Violet explained, pulling up a highly detailed PowerPoint that featured a picture of a corsage and limo obscured by a big red circle-and-slash “NO” symbol.

“The American education system forces us into a rigorous schedule that prepares us for a lifetime of unsatisfactory nine-to-five work from an early age. And we’re not even allowed to go to the bathroom without asking for permission! To distract us from this oppression, the idea of prom is dangled in front of our noses like a carrot to a horse. We are supposedly ‘rewarded’ for finishing high school with the ‘opportunity’ to buy prom tickets that cost us multiple weeks’ worth of our minimum-wage salaries from our after-school jobs. Girls are pressured into spending hundreds of dollars on dresses they will only wear once…”

Violet took a breath and steadied herself on the teacher’s podium. She pulled up her next slide, which included a scan of a old local newspaper with a headline that read, “HORSIN’ AROUND FOR LOVE: AREA BOY STEALS HORSE TO MAKE ULTIMATE PROMPOSAL.”

“Moreover, prom only enforces outdated heteronormative ideas of courtship and masculinity. It makes students flagrantly disregard law and order for no reason other than achieving flawed, media-influenced concepts of romance.”

With that, Violet stared straight across the room, into Tim’s eyes. He felt like he was going to shit his pants.

After school, Tim approached Violet, ready to confront her for her trashing everything his family stood for. But he got distracted when he noticed a poster featuring world-renowned recording artist Drake hanging in her locker door.

“Tim,” she said, not breaking eye contact with herself in the locker mirror as she applied lip gloss. “Everyone likes Drake.”

“Drake would want you to go to prom.”

Violet slammed her locker shut and began to walk away.

“Did you really mean what you said today? About prom being like…like a carrot?” Tim yelled after her.

She paused, but didn’t turn around.

“Of course. I would never put anything in a PowerPoint presentation that I don’t believe in.”