Kanye on Ellen, a social justice magazine by teens, and more stuff to get into online. 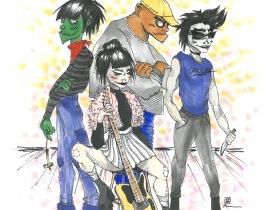 Literally the Best Thing Ever: Gorillaz

Risen, edited by Jazmine Alcon, is an online platform for teens. Its purpose is to provide a space for people interested in social justice issues and the like. Risen publishes stories and art exploring sexuality, racism, and gender politics. I started religiously reading it about two months ago, and since then I’ve been hooked. The writers and artists are exceptionally talented, insightful, and funny! Risen also is super informative; it keeps me in the loop with current events, and I love being able to read diary entries by creatives my age. I am absolutely in love with this poem/short film by Malea Moon and Victoria Lee. It’s full of beautiful scenery and powerful words that will leave you feeling nostalgic and warm:

I am so glad Risen exists. I can’t wait to see where it goes from here! —Lauren Tepfer

Kanye West can be a polarizing person, but so are 99.9% of all humans, let’s be serious. The thing is, I wish more of us could be as honest as Mr. West—especially after his appearance on yesterday’s episode of Ellen. He delivered a near 10-minute monologue about wanting to help people, about creativity, about passion, and about the evolution of making art. (Confirmed: You don’t just have to be or do just one thing anymore.) But what hit me hardest was when Kanye said, “They talk so much shit about the people who care the most,” citing the way our media—and society in general—tend to scrutinize anyone vying for change. A lot of us succumb to the pressure to extinguish or dim ourselves a little bit in an attempt to appease other people (I know I have). To watch Kanye so eloquently articulate what he thinks and feels while making the most of his short time on air made me want to stand up, cheer, and then work harder. Without apologizing for any of it. —Anne T. Donahue

Video: Lin-Manuel Miranda’s commencement speech at the University of Pennsylvania

The last graduation I went to was in 1999, when I graduated grade eight. I think that’s why I love graduation speech season so much. I like to think the speaker is talking to me, and that they know how I’m feeling. I like to draw similarities between their words and my own experiences because life can be hard, and feeling connected to a person you look up to makes it less so. Unsurprisingly, Lin-Manuel Miranda’s speech at the University of Pennsylvania this week made its mark on me. By talking about making hard choices, growing, and working hard, he made me want to get typing (as he always does) but to also stop shying away from my own painful experiences. Turns out you can’t escape the past—but odds are, it’s leading you someplace pretty great. —Anne T. Donahue ♦