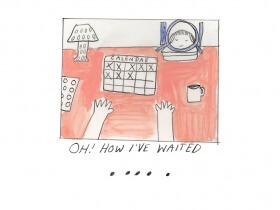 The First of the Rest 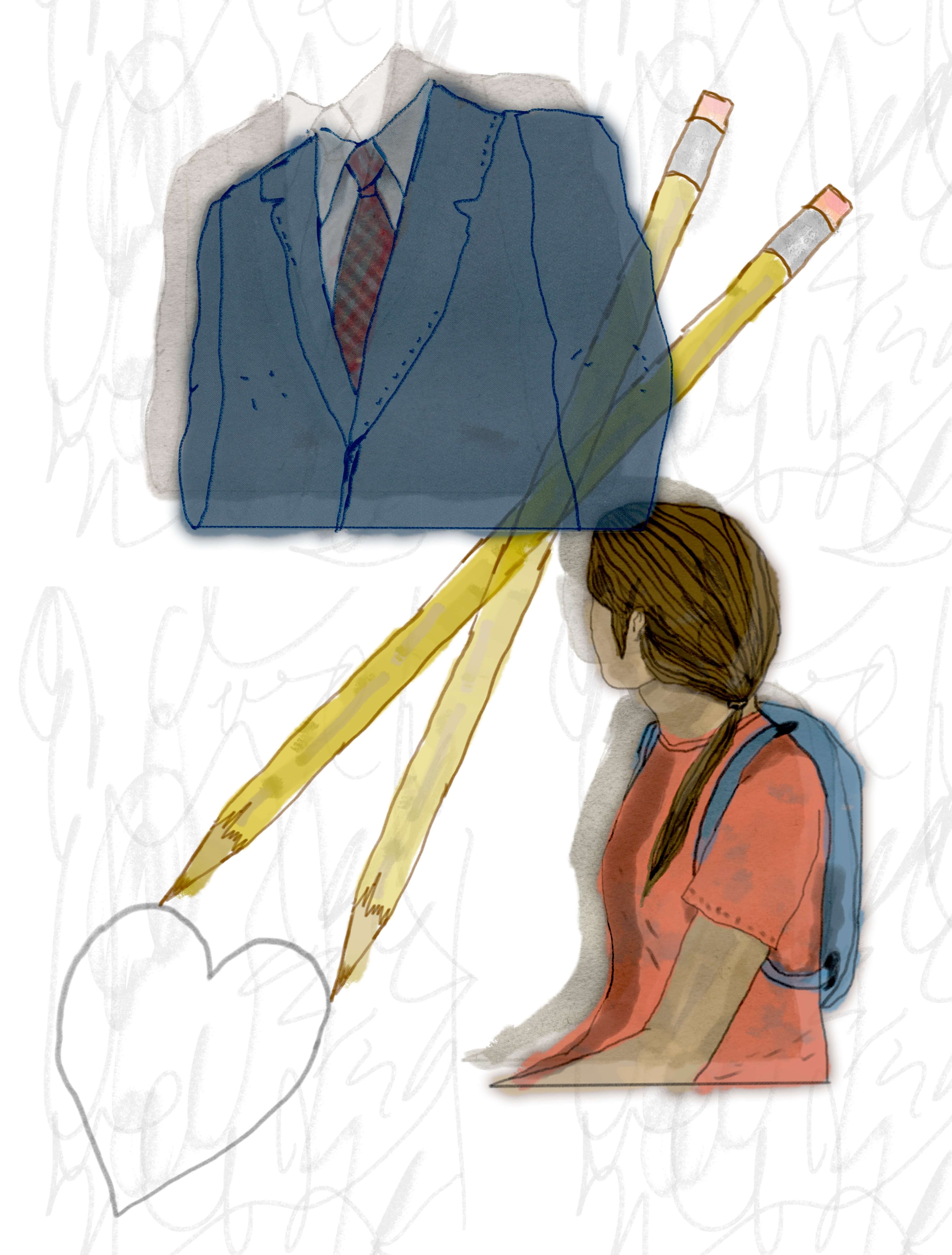 The author of this piece has asked to remain anonymous.

Jay and I filled in the spaces between each others’ teeth. I fell in love recklessly and in adherence to every cliché—coy smiles, inside jokes, apprehensive casual touches—save for two surprises: the twice-my-age gap and the supposed power imbalance. “But hey,” I told myself, “he’s not my teacher—he just happens to teach at my school.” Apparently, in the eyes of the law, that doesn’t make a difference. Although the age of consent in my state is 16, any sort of student-teacher relationship that so much as borders on romantic is grounds for dismissal of the teacher. Depending on the severity, they may serve time in prison.

During our multi-month slippery slope into what would later be dubbed a “scandal” by my peers, teachers, and local media, I cherished Jay’s smiles, his humor, and his head-tilts of genuine concern. I know, the immediate reaction is to assume that it’s a grade-A case of emotional manipulation: Older man sees younger girl in a vulnerable state and subsequently takes advantage. I still cannot say with certainty whether or not that was the case, but I do believe his intentions were good regardless.

We began talking during my junior year of high school. Jay was new that year, and all I knew about him was that he was pretty good looking, as teachers go. I had a class in his room, and he would occasionally hang around and chime in on our discussions. That class was a favorite of mine, and I was a very vocal participant. I liked the way he paid attention to what I said, the way I could feel him looking at me when I spoke. Though it sounds arbitrary and a little stereotypical, I was drawn to and impressed by his taste in music. This guy is, what, in his 30s? He’s a teacher and he’s listening to Pavement and Neutral Milk Hotel and Minor Threat? Granted, those bands are more from his time than mine, but it was still pretty striking that our tastes were so aligned.

In my senior year, I had an abbreviated schedule, so I used a lot of the free time to catch up on schoolwork in Jay’s classroom. I became something of a fixture—I’d sit off to the side and crack jokes during lectures, and eventually, his classes would be surprised if I didn’t show up on a given day. Staying late after school became our norm, and we wound up spending hours just talking to each other. Our conversations were relatively harmless at first, but evolved into dissections of our personal lives—specifically, our significant others. At the time, Jay had been married for a few years, and I had been with my long-distance boyfriend for two. There were many parallels between our experiences, and it was a relief to discover some sense of solidarity therein.

Around the time of my 17th birthday, I began keeping a journal. Having grappled with acute depression for god knows how long, this provided a sense of catharsis. Nearly every day, I tried to write something; sometimes I would ramble for three pages straight, and sometimes I couldn’t muster more than a quick couple of lines. Being the over-sharer that I am, I let Jay review everything I wrote, and he began to craft his own responses. We shared poems, doodles—really any form of expression. I found that this made the reality of our relationship, then still platonic, all the more tangible to me.

It wasn’t until months into this exchange that I felt a shift. It was heavy, low, and subtle; my tectonic plates were reaching for new settlement. Casual touches became a source of elation, and gentler words brought me to my knees. There was no way it could’ve been mutual—not only would that be inappropriate, it’d just be downright absurd. But suddenly, it was. A particularly revealing (if cryptic) passage from my journal told him all he needed to know. We talked it over one afternoon that spring, and after admitting our mutual feelings, he kissed me hard on the mouth. It tasted like warmth and I wanted more.

Sneaking out of school, avoiding the hungry eyes of gossipy English teachers, and orchestrating heated utility closet hookups became our specialties—until we became lazy. Sneaking turned into walking, avoiding became ignoring, and orchestrating devolved into just having at it. Maybe it was that time we sold tickets together at a school sporting event, wearing each others’ jackets and huddling together over a crossword. No one made a fuss about it then, but I did get some questionable looks from a few teachers. Or perhaps it was the day I stayed until 5:30 on a Friday afternoon, talking about this and that until Jay’s supervisor came in. She emailed him about it, asserting that that kind of interaction was inappropriate at best. Perhaps it was one of the many times he drove me to work. Anyone could’ve seen us heading downtown in his car, sitting a little too close for comfort. These were warning signs that I failed to heed. Regardless of how, we were seen in the wrong place at the wrong time by the wrong person, and that was it. There was no grace in our goodbye, because there was no goodbye at all.

We got caught a week before I was scheduled to graduate. I was pulled out of my first period class by my mother, who drove me home with lips sealed tight. I knew it was over before she said a word. She and I waited in silence for the school district’s representative to come over and interview me. She showed me screenshots of emails we had exchanged with evidence too incriminating to misconstrue. After that, I spoke to a detective and a social worker, both of whom seemed very uncomfortable around me. The detective wouldn’t look me in the eye, while the social worker spoke to me like a child. “Do you know where your private parts are?” she questioned me, to both my horror and mild amusement. I played along, but made no attempt to hide my exasperation with the situation.

Every line of communication was cut immediately. The cops were monitoring both of our cell phones, as well as our email accounts. It took barely a day for the information to spread to every social echelon, and soon I was bombarded with digital pity, well-wishing, and harassment alike. When the story went public, every article was commented on by everyone—former classmates of mine, former students of his, even complete strangers. Every snide comment cut deeper than it should’ve. On the other hand, girls I had never spoken to messaged me, telling me they’d been in the same position, that I was strong for handling the situation with such “grace.” I didn’t feel graceful or composed at all. I couldn’t eat, I couldn’t sleep, I couldn’t even think in straight lines; the guilt was all-consuming. I felt I had effectively destroyed a man’s career and family in one fell swoop.

In retrospect, I clearly wasn’t the one to blame, but at the time I had convinced myself that I was little more than a homewrecker. It felt like a knife wound when people told me it wasn’t my fault, but it felt like a gunshot when others told me it was. I was either left feeling like no one understood my pain, or that they did and I deserved it. I didn’t want to care what they thought of me, but I couldn’t help it. My parents blamed themselves for my “self-destructive behavior.” My friends, though faithful, were clearly a little disturbed. I barely sustained contact with anyone from my high school, aside from my closest friends. These were the same kids I’d gone to school with for 12 consecutive years, and now their entire perception of me had been turned on its head—right before we were all scheduled to go our separate ways and begin our foray into adulthood.

I have had a great deal of time to reflect on my relationship with Jay, for better and for worse, though I still am uncertain of where I stand. Consciously, I know that I was in a relationship characterized by power imbalance and the potential for manipulation, but I still do not feel that I was, in fact, manipulated. Perhaps I am too close to the situation to recognize it. I have learned how to more carefully tread boundaries, particularly where romance is concerned; I have faced criticism from all sides and managed to handle it with poise. If nothing else, our relationship has taught me that life goes on. I can be hopelessly in love with someone, have them swiped out from under me in an instant, only to discover that I am still alive—no, still thriving. ♦