Literally the Best Thing Ever: Gorillaz

The animated band made me believe that I, too, could do something cool. 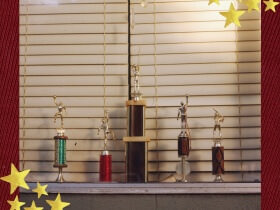 Friday Playlist: Over & Out 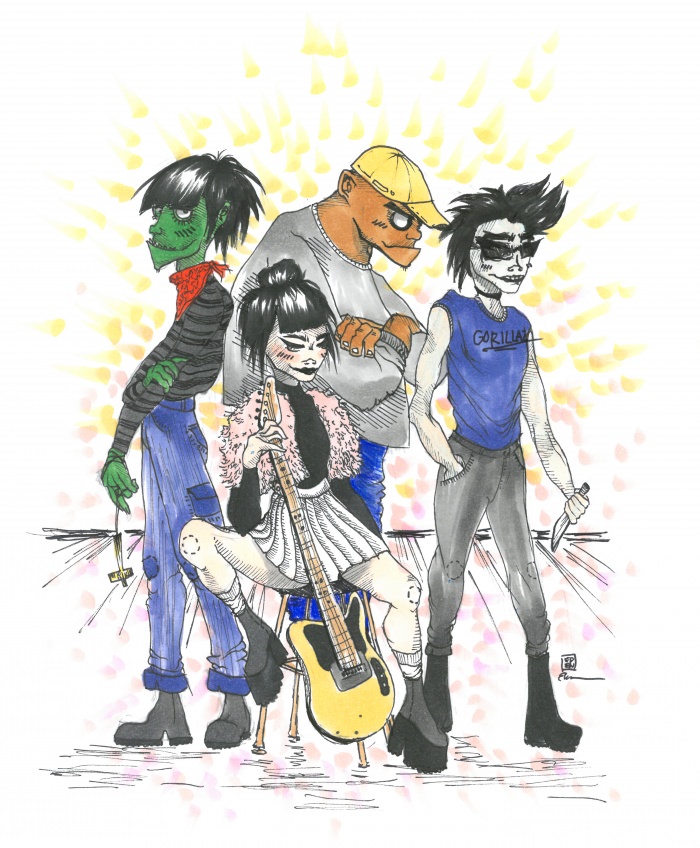 In case your life has been void of their absolute magic, Gorillaz is the most successful virtual band ever. The group consists of four members—2D, Noodle, Murdoc, and Russel—who are technically animated but very much alive in my heart. Dreamt up in 1998 by co-creators Damon Albarn and his pal Jamie Hewlett, the digital dimension of Gorillaz has since become part of music fanatics’ reality. Between 2001 and 2011, Albarn and Hewlett have produced four albums with various musicians playing the parts of the animated members. After their last album, The Fall, Gorillaz set off on a tragic hiatus following a conflict between Albarn and Hewlett. What was that noise, you ask? Just the sound of fanz moaning in five years’ worth of agony inside a Gorillaz-deprived purgatory.

Watching Bananaz, the roughly made and roughly humored Gorillaz documentary, cracked my mind open; injected it with pure amazement, wonder, and sparkly energy; and then stitched it back together by threading the needle of inspiration with the yarn of I LOVE LIFE. It details the shenanigans of Albarn and Hewlett, the illustrator of the comic series Tank Girl, as they conjure up characters and sounds. They even convince a church’s children’s choir leader to let the kids sing on their not entirely clean track. What a time!

Technically, though, the bomb of *ASPOFICHBSDILB* had been planted after hearing “Feel Good Inc.” on a Pandora station in my bedroom one delirious night. (Warning: Animated ass-shaking.)

Being a #teen privy to the #internet, my extensive research led me to the spectacularly titled Bananaz, after which the bomb was like “lol” and blew up in my face, obliterating any doubt that Gorillaz were the geniuses I had been starved of in my Top 40 ’00s childhood.

Alt-rock, Britpop, trip-hop, hip-hop, electronica, reggae, and pop are all labels that could be placed on Gorillaz, but none would fully describe the virtual band’s different sound. To default to a classic phrase, they are greater than the sum of their parts—or phases.

The Gorillaz use “phases” to mark the difference in their sound and animated story over the years. Phase One: Celebrity Take Down lasted roughly from 1998 to 2001, including the album Gorillaz and its wacky partner, G-Sides. After the release of their first album, Gorillaz received heaps of acclaim and award nominations for their weird musical ways, which may or may not have led to the Celebrity Take Down. This phase was critical to the Gorillaz constitution, as it solidified the band as a functioning, throbbing heart of plain cool art rather than a mediocre, robotic vein of the music industry.

Phase Two: Slowboat to Hades was like sunshine and water for the promising sprout that was the Gorillaz. Demon Days, perhaps their most popular album, was released in 2005 and carried the spectacular singles “Feel Good Inc.,” “Kids With Guns,” and “Dirty Harry.” The music video for “Feel Good Inc.” will always be a source of inspiration for me, conceptually and artistically. Outside of the musical realm, the group released a compilation DVD, the D-Sides remixes, as well as their own autobiography, Rise of the Ogre (which desperately calls to me from my Amazon shopping cart).

Their last will and testament, Phase Three: Escape to Plastic Beach, produced the albums Plastic Beach, whose single “Up on Melancholy Hill” is on constant loop in my internal playlist, and The Fall. The world of Plastic Beach is my imagination #goals, which makes it even more tragic that Gorillaz left it starving for more at the peak of their mind-blowingness. But I kinda get it. I mean, what’s there to do except cool off after a Lou Reed collab, a Converse line, creating a musical styling app, and producing the equivalent of a greatest hits collection?

Answer: Chill out until you begin secretly starting your fifth album (I’m sorry, fourth phase), to be released in 2016 with a rumored Bowie collab, awakening the comatose hearts (and ears) of Gorillites around this great, green Earth.

My admiration for Gorillaz largely draws from their ability to not only live but thrive in the mystical oasis between creative expression and mainstream/commercial art and music. The eccentricity and rawness of what has become Gorillaz forced people to pay attention to this new entity, and by default, propelled them into peoples’ minds and headphones. The natural next step for a musical group is to continue up the ladder of publicity and my-face-everywhere-dom. If anything, the Gorillaz’ popularity has made Albarn and Hewlett rebel even more against what is expected. Like that stubborn but adorable cousin that won’t let you hug them and, therefore, making you want to hug them more. The Gorillaz’ attraction is a merry-go-round that just doesn’t stop ’rounding.

As an artist, Gorillaz planted in me these simply crazy and blasphemous ideas that I, too, COULD DO SOMETHING COOL. And on my own terms. And by mixing the genres of art and music and awesome and funky fresh. And with some pretty seductive primate-human characters who sometimes summon special powers in super worlds.

But listen here, kids: The meatiest lesson that Gorillaz gave to me was that the success comes after you—you don’t go after it. Detaching yourself from all preconceived goals and, ugh, expectations means that what you will end up with is a shining, pure creation/idea that is all YOU!

Whimsical as they may be, the Gorillaz are demonstrating immense strength in carrying on with the concept that is wholly themselves—AND FREAKIN RAD. In crucifying any ego or self-consciousness, Albarn and Hewlett pushed through the human/artistic instinct to make something “good,” and ended up making something extraordinary. A great example of what wonders can come about when you let yourself go.

And if you think that they are just the exceptions—two British, musical aliens—then remember that these two wacky dads in their 40s slayed the self-doubt beast and brought it on like Donkey Kong to music, culture, pop, art, and flippin’ Pandora. ♦