An interview with the 13-year-old cofounder of Electrick Girls, a movement for radical girls of color. 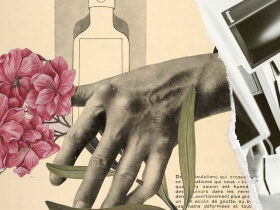 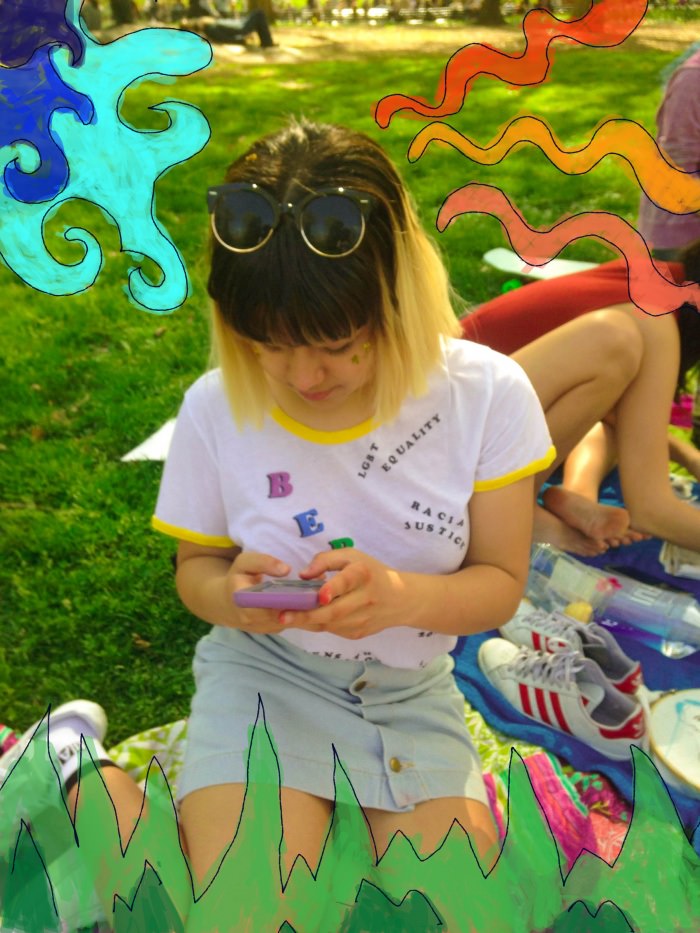 My friend Hope Petra is a 13-year-old visionary navigating her way through adolescence and the internet art world. She runs Electrick Girls, a movement for radical girls of color, with me. There are tons of young role models in the arts, and Hope is one of mine. She is making a name for herself by creating safe spaces for teenage girls, and I recently met up with her to talk about that journey.

Now that our childhoods are over, and we’re moving into teenage-hood, what are some things you’re anticipating and some things that you’ll miss?

Teenage-hood is about exploring your interests, going through different phases, learning what responsibility really means. [It’s about] becoming your own person and who you’ll be for a lot of your adult life. Even though it’s not final or definitive, it still shapes you, which makes it a really important time.

When it comes to middle school ending, as I’m growing up, there’s more pressure to produce, whether it comes to homework or participating in extracurricular activities or my art. Through elementary or middle school I didn’t feel as pressured, but now deadlines are coming, I have to do art and have to perform when I don’t want to. Art should be something I can do whenever I want but, like, I know things can’t always be that way. 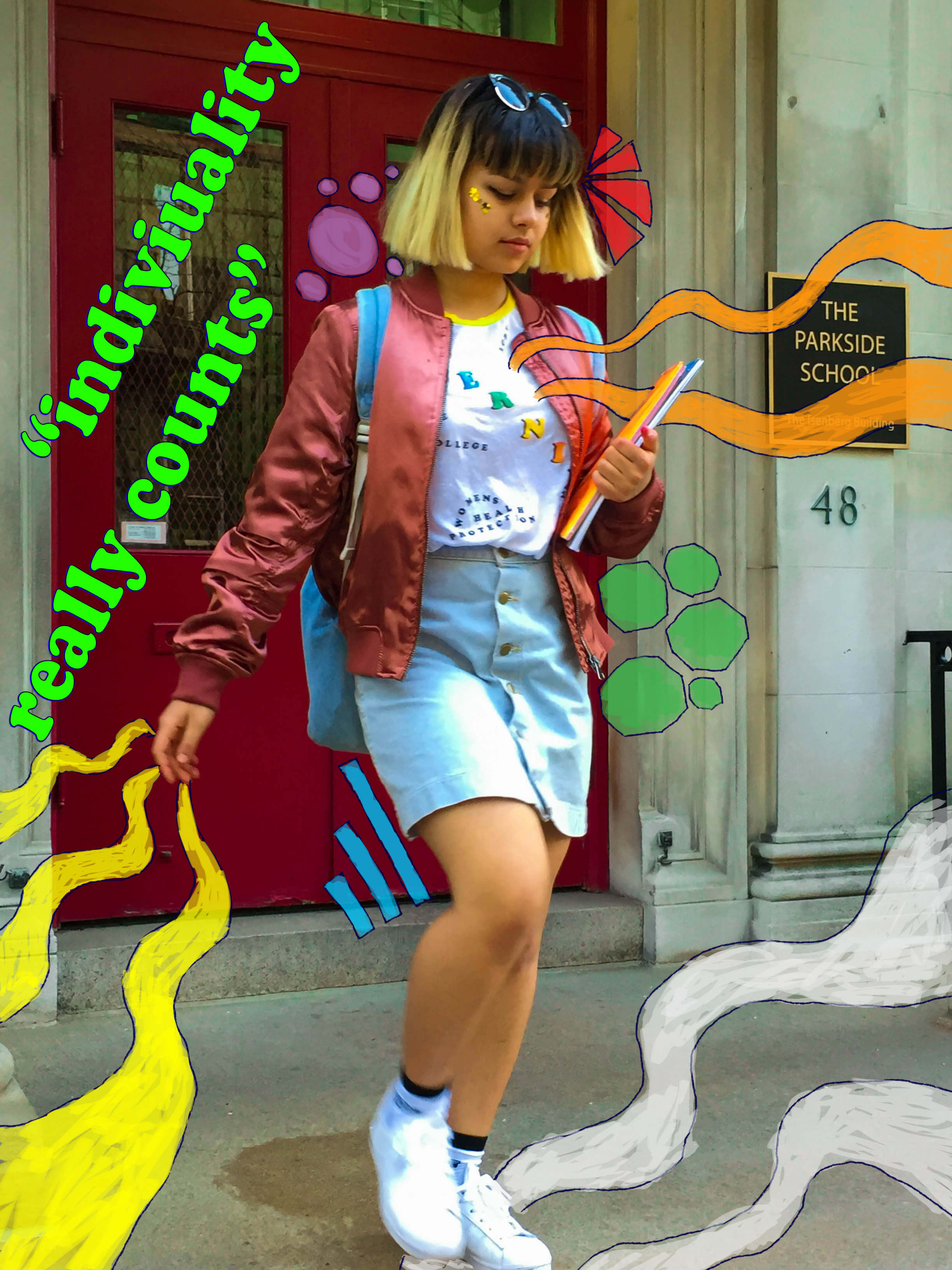 Did you ever have vision or idea of yourself as a teenager when you were younger?

Ideas like that are always really essential, because daydreams can sometimes be incentives to work toward achieving your goals. A lot of the time you see Tumblr or Instagram posts of people doing cool things, like writing poetry or taking photos of their friends or themselves in amazing places and organizing collectives and gatherings. It’s so great, and you see them as your role models and your inspiration. It’s what keeps you going and that’s your goal, but it can be stressful, too. Instagram and Tumblr aren’t always real life, and trying to achieve unrealistic perfection is hard. Although reality can bring dreamers down sometimes, you gotta find balance. But in the future, no matter where I’m at, as long as I’m in the city, with art, activism, and friendship in my life, I’ll be OK.

On the internet, self-identity has become a popular concept. There are tons of people identifying with their sexuality, gender, or race. What affect has this made on you?

There’s tons of pressure to find your identity and start making decisions, when in all actuality whether it seems like it or not there is a time for most things, especially personal things like self-identity or goals. It’s OK to change and it’s OK to be a different person as long as you’re prepared for it, because that’s how you develop into the best version of yourself. For me, it’s always been really motivating to see people who are so unapologetically themselves because it encourages you to be the same way. 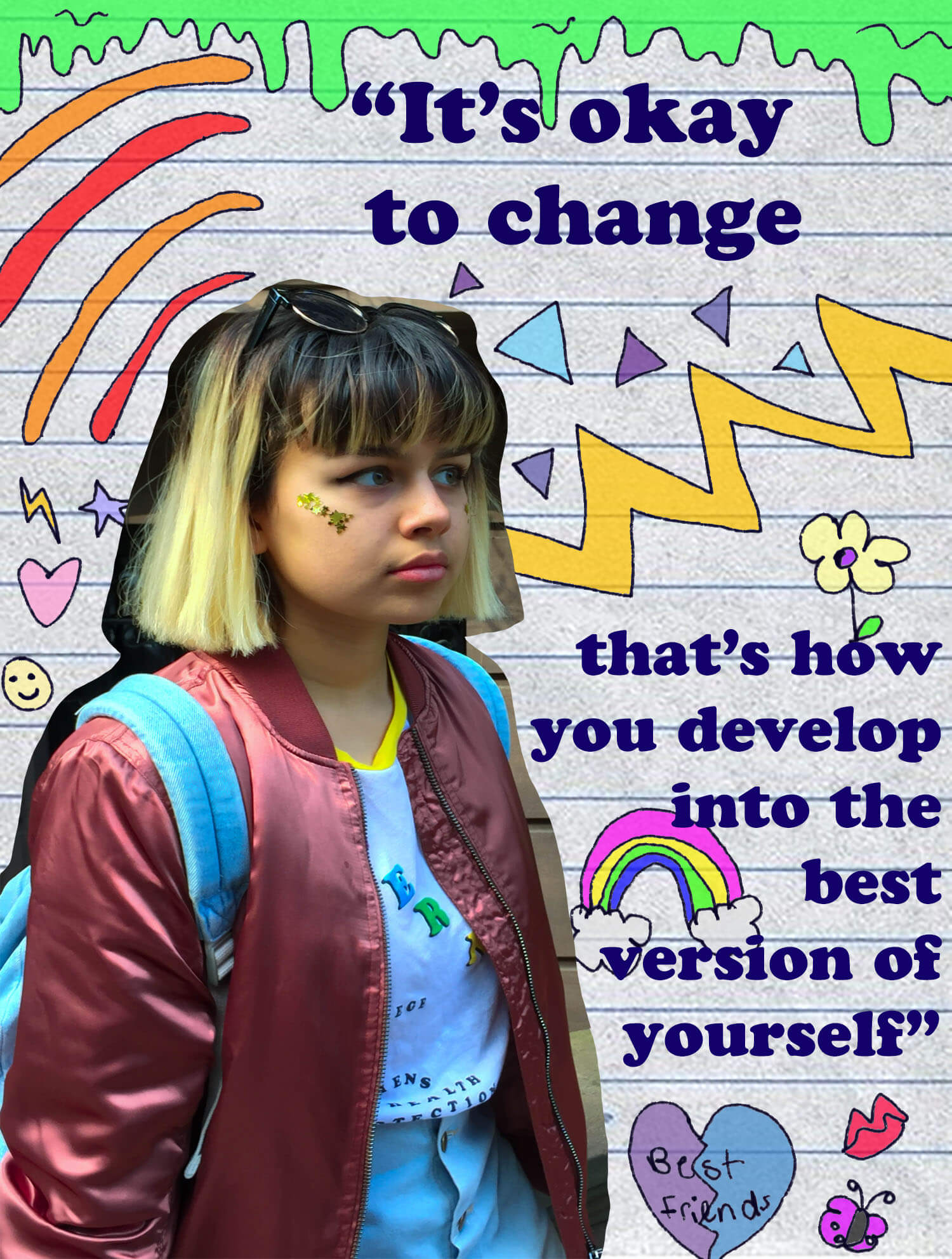 There are a lot of goals that I have for myself that I don’t want to define just yet. Like I said, reality can bring people down sometimes, so I’m trying to keep my ideals realistic; I know that I’m going to change a lot in the next three or four years. As long as I’m unapologetically myself, working hard, changing the world—and having activism, social justice, and intersectional feminism in my system of values—then I know that wherever the world takes me, I’ll be happy.

As we grow older, in the moments leading up to adulthood, there’s this anxiety about the future. What are you plans for after high school?

The end of the year is a relieving time because school is over, but it’s also a foreshadowing. It’s the phase prior to what’s going to come and that really has made me think a lot. For me, collaborating with others is going to be a very important part of my teenage years and early adult years and so on. A lot of the time, for people who have alternative interests it’s difficult to relate to their peers because they don’t have the same interests and values as you. Making safe spaces for different girls will be my main mission when I’m older. I just wanna be a cool, carefree art kid! 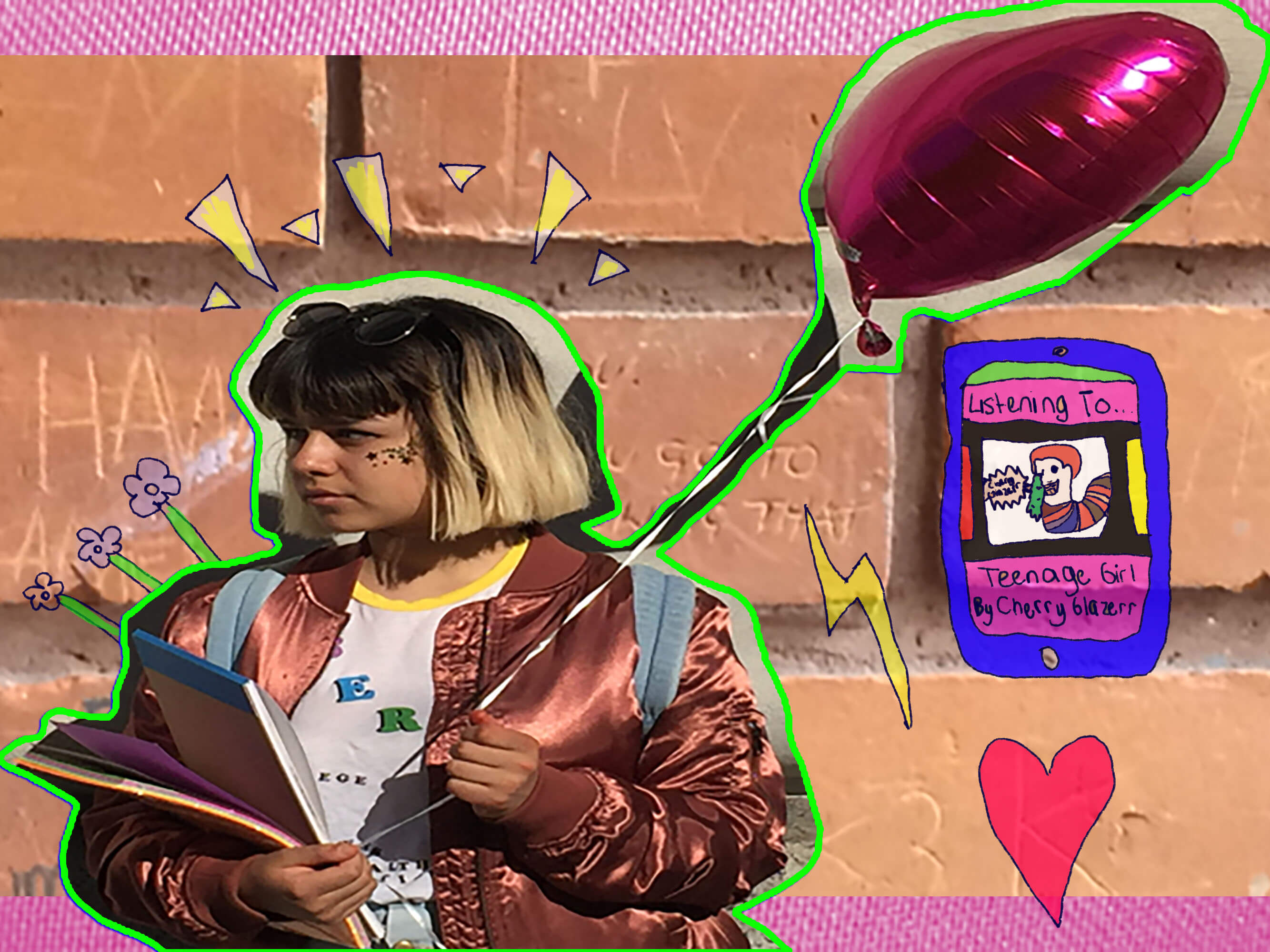 Goals! No one talks to you as a kid about art as a career or a major. It’s kinda scary because it’s what you want to pursue, but everyone is concerned about making money and settling down.

There’s tons of self-doubt in the art industry, because jobs are limited and it’s hard making your way through the capitalistic society we live in. Success is often defined by money and stability, and it’s really hard to shake those ideas and put positive ones in their place. The stress of success is looming—people feel like they have to copy the “successful” in order to be financially stable with their passion. It’s hard to stand out in an industry where your work is you, your identity, your personality—and not always something that can be mass-produced. People need to be who they are. Individuality really counts, and is essential in overcoming that self-doubt that’s so prevalent in the art world.

Has there ever been a time you suppressed your own interests to fit in?

School! It’s a great example because you can be talented in many different ways, like sports or theater or academics. In order to be successful in these areas you practice, but in order to be successful socially you have to fit people’s best interests—which often means conforming. That’s what appealing to masses is, or what advertising is. 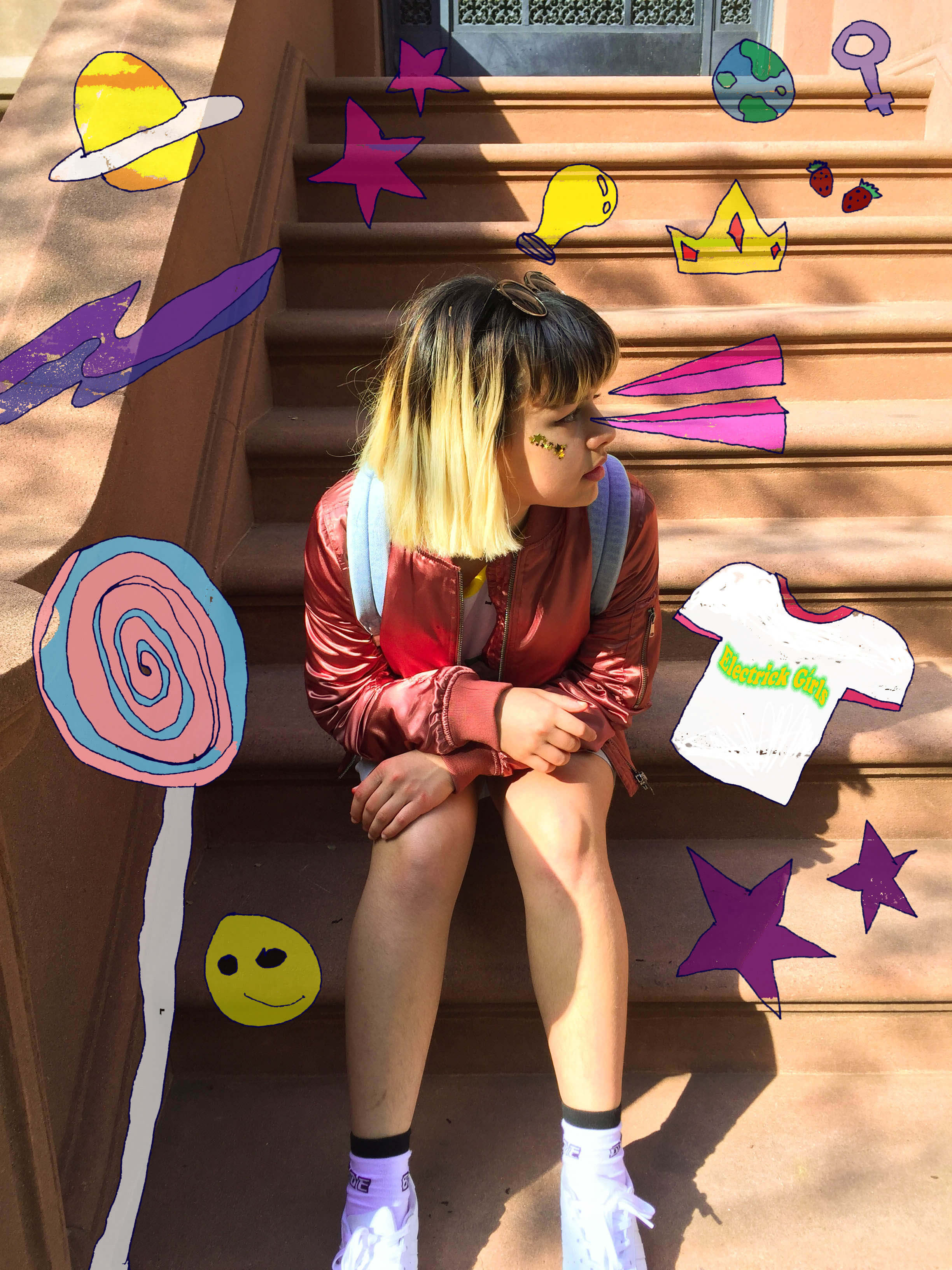 Have you ever been afraid to stand out?

There’s the few like Prince or Madonna who aren’t afraid, who made it their trademark. Being comfortable with your art and being willing enough to be yourself and not conform to mainstream art is a creative risk, but it’s important to take it if you want to accomplish your goals. They’re your goals, so it’s you that accomplishes them. Art is creativity, and creativity is uniqueness. So be your unique, creative self and success and improvement will come to you. ♦