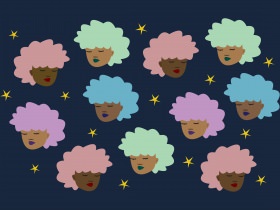 All the Women Are White, All the Blacks Are Men, But Some of Us Are Brave: Black Women’s Studies
Edited by Gloria T. Hull, Patricia Bell Scott, and Barbara Smith
1982, The Feminist Press
I became a black feminist in high school, after speaking to my grandma about her experience as a nanny for one of my history projects. Four and a half years later, as a college sophomore, I read But Some of Us Are Brave in my black history class, and my belief in intersectional feminism was further solidified. Written with personable frankness, this book is a collection of essays and other works that emphasizes the necessity of teaching black women’s studies before black women’s studies was a subject mainstream society deemed worth talking about. This is my handbook for how we can deconstruct the intersections of patriarchy and racism in the world. (It even comes with lesson plans for teachers who may want to teach black women’s studies.) Many of the authors come at the hypocrisy within social-justice movements with a sobering, sharp voice. One of them even shut down abolitionist Angelina Grimké’s racist analysis of the way black women raised their children during slavery (Grimké was surprised that they loved and cared for their children). And there’s even an essay from a white woman who pretty much calls for her fellow white feminists to stop complaining about having to hear about racism.

My favorite piece is one of the very first essays by Michele Wallace. Wallace reflects on her time as a Black Panther, starting when she was a teenager. It highlights the misogynoir she faced from black men, and from white women who believed they didn’t need to work on abolishing antiblack racism because they were dating black men. It reminded me that not much has changed since my grandmother was in her teens. But I was afforded a sliver of hope when Wallace mentioned that, as a young girl, she once dreamed of becoming president, but then realized her dark skin wouldn’t even get her in the door as First Lady! That essay was written in 1975, and more than 30 years later we’ve now had Michelle Obama’s beautifully black muscular self in office as First Lady for eight years! This made me look toward the future with a sense of optimism for what the world might look like for black women in 50 years, when my own granddaughter or grandson has to interview me for a class project. —Thahabu

The Skin I’m In
Sharon G. Flake
1998, Hyperion
I’m always wary of required reading lists at school. I mean, each year it’s more than likely going to include The Catcher in the Rye or some other whiny, white male literature. One year, I was assigned to read The Skin I’m In by Sharon G. Flake. The book is about Maleeka Madison, a dark-skinned seventh grader insecure about her skin color and the way she dresses. I was around her age when I read it, and while that seems like so long ago, I still remember every aspect of that book. The street-smart characters that revolved around Maleeka’s world were written with a keen sense of accuracy—they don’t fall into the typical tropes we get with characters of their kind. It resonated with me so deeply that I can recall off the top of my head the taunts her bullies used: “Maleeka, Maleeka—baboom, boom, boom, we sure wanna keep her, baboom, boom, boom, but she so black, baboom, boom, boom, we just can’t see her.” It was an easy read, which allowed for my class to digest the complexities of colorism in an accessible way. While the discourse on colorism has more academically appropriate literature now, I’d like to come back to where my education started, in a stuffy middle school classroom with a worldview-opening book. —Tayler Montague

Summer of the Cicadas
Cole Lavalais
2016, Willow Publishing
I took a break from reading poetry to dive into Cole Lavalais’s debut novel, Summer of the Cicadas. The novel centers on 17-year-old Viola “Vi” Ikewe Moon as she leaves Chicago to begin college at A&M, a fictional HBCU. Vi’s story is one of finding yourself despite obstacles. Vi felt familiar to me—like a cousin or friend. Perhaps it’s the book’s Chicago setting, or the fictional HBCU, both markers in my immediate family. Perhaps, more intimately, I connected to her story of mental illness. Before reading this novel, I had not read a contemporary depiction of a young black woman dealing with mental illness. Early in the plot, we learn Vi keeps tabs on the cutters in her life. Throughout the novel, it becomes clear that Vi is dealing with her own mental health. This is an important depiction to have, and I’m thankful Lavalais chose to tackle such a weighty issue. The novel highlights the multitudes of blackness, and is a stunning debut. I can’t wait to see what Lavalais writes next. —Diamond Sharp

Negroland
Margo Jefferson
2015, Pantheon
Margo Jefferson is a Pulitzer Prize–winning critic. Her book Negroland received such great acclaim upon its release last year that I sought it out. To put it simply, the book is about growing up within an affluent black family. Jefferson starts off with the contemporary history of black people in the United States—ex slaves and their children who were able to have access to financial wealth post Reconstruction. She then discusses her own upbringing as a black girl within that world, which she calls “Negroland.” According to the author, “Negroland is my name for a small region of Negro America where residents were sheltered by a certain amount of privilege and plenty. Children in Negroland were warned that few Negroes enjoyed privilege or plenty, and that most whites would be glad to see them returned to indigence, deference, and subservience. Children there were taught that most other Negroes ought to be emulating us when too many of them (out of envy or ignorance) went on behaving in ways that encouraged racial prejudice.” By using this name, Jefferson is able to critique, as well as give an insider look into why respectability politics are so deeply entrenched in communities like Negroland. And how, ultimately, they won’t save you. —Tayler Montague ♦