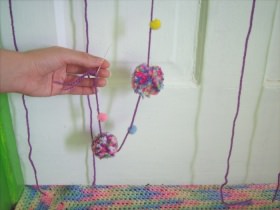 How to Make a Pom-Pom Curtain

Bonjour Tristesse
Françoise Sagan
1954, René Julliard
I first read Bonjour Tristesse (written by Françoise Sagan when she was 19!) one summer while stuck to my parents’ leather couch. In Philadelphia, Pennsylvania, the weather was hot, humid, and boring, and the cicadas were screeching up a storm. But on the French Riviera, where this novel takes place, the air was sweet and dry, and a sea breeze was blowing up to 17-year-old Cécile’s Mediterranean villa. She has just flunked all her exams, and is supposed to be spending the summer studying. Instead, she’s partying with her less-than-responsible father and his much younger girlfriend, and sailing the cove with a boy she met on the beach. It’s all very innocent until her father gets serious with a woman his own age. Cécile, frightened that their relationship will never be the same if he marries, takes drastic action. But her scheming leads to disastrous consequences, and reveals the sadness behind her rebellious spirit. I love the simple beauty of this novel, and that it isn’t afraid to explore the darker parts of Cécile’s seemingly privileged life. I also loved that, from the comfort of my parents’ couch, I could almost touch the glamour and tragedy of these characters’ lives. That’s how good a writer teenaged Sagan was: The parties, the dancing, the black coffee and orange slices Cecile has for breakfast before a day on the blue shore—I could taste it all. And then I watched the movie and got to experience it all over again. So if boredom strikes, slice up some fruit, slip open this novel, and then slide your feet into the couch cushions like you’re burying them in the hot sand. —Monika Zaleska

What Is Not Yours Is Not Yours
Helen Oyeyemi
2016, Riverhead Books
What Is Not Yours Is Not Yours is a book of nine short stories by Helen Oyeyemi. Each story is about 50 pages—long enough that you get deeply invested in them, but brief enough to leave you with questions. The worlds Oyeyemi constructs in her narratives can seem to intersect with and oppose each other at once—it’s like they are being told for the first time but have also been passed down from generation to generation. For example: “A Brief History of the Homely Wench Society,” which details the workings of a university women’s society formed in response to snide remarks made by male academics. Details are repeated from story to story, which made me wonder, Is the earth a small enough place for all these people to connect? Oyeyemi’s writing makes it believable enough, even when the storytelling is unordinary, spooky (but not scary—I just get creeped out easily), or worry-inducing. —Rachel Davies

Self-Help
Lorrie Moore
1985, Knopf
Books by lit goddess Lorrie Moore have always been gifted to me during pivotal life-moments, and her aptly titled debut Self-Help was the one that ushered me into the world of post–high school. Fittingly enough, the short stories in this book feature characters who are just about to cross a threshold themselves—they’re falling in love, falling out of love, losing, gaining, sacrificing, and dealing with the complexities of young adult LIFE. The darkly funny, devastating stories in this book have the enchanting ability to offer solace, even when you don’t even anticipate it. —Jinnie Lee

Invincible
Amy Reed
2015, Katherine Tegen Books
Evie was at the end of her journey with cancer. She’d refused any more treatment and accepted that she was going to die. And then, miraculously, she didn’t. But Evie doesn’t know how to go back to her regular teenage, pre-cancer life. Her year and friends on the cancer ward changed her, and she no longer connects with her family, best friend, or boyfriend, none of whom seem to know how to treat her now that she’s no longer Cancer Girl. Pot, pain pills, and a new boy named Marcus become the center of Evie’s existence as she simultaneously tries to numb herself and to live a new, exciting, full life. Though Invincible is compared to both Go Ask Alice and The Fault in Our Stars, this is so much more than a drug book, or a cancer book, or even the two combined. I adore Amy Reed’s writing because she is the master of creating complicated, emotionally nuanced, and thereby VERY REAL characters. She particularly excels here. Though most of us (hopefully) will never be in Evie’s exact situation, her freefall and the feelings she is struggling with are relatable. She’s in a place in life where nothing plays out as she expects, and it leaves her questioning everything, especially who she is and the life she wants to live. Evie’s story ends on a cliffhanger, but the companion book, Unforgivable, just came out last week. Now is the perfect time to dive in! —Stephanie Kuehnert ♦