How to Make a Pom-Pom Curtain

A DIY decoration for your room. 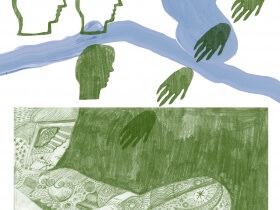 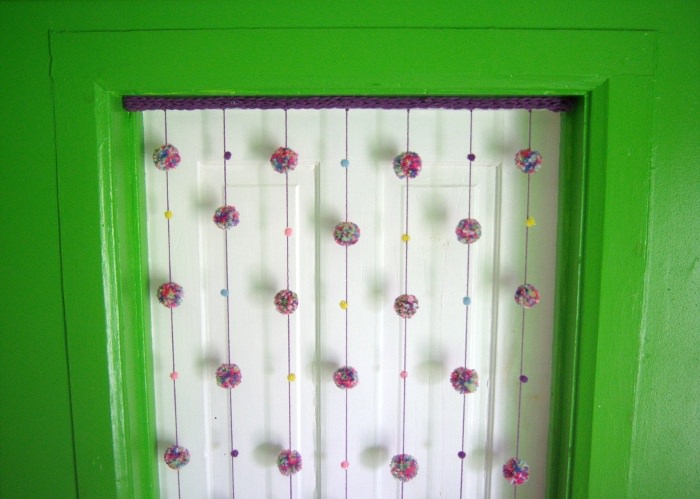 You’ve adorned yourself with pom-poms. You’ve even covered your beauty tools with them. Why not spread the pom-pom love to your room? With this DIY, I’ll show you how to transform a little bit of yarn and a couple dozen pom-poms into one seriously fun curtain, fit for any doorway or window. 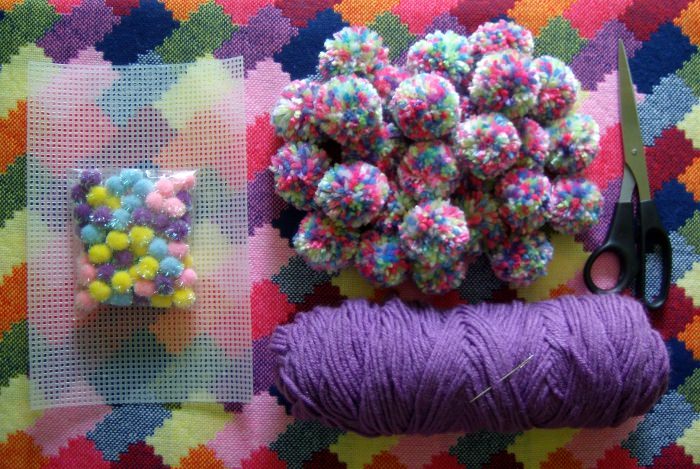 Start by measuring the width of the top of your door and the length/thickness of the doorjamb. My measurements came out to 30 inches by half an inch—but yours will likely be different! Whatever the measurements come out to, be sure to write them down for the next step. 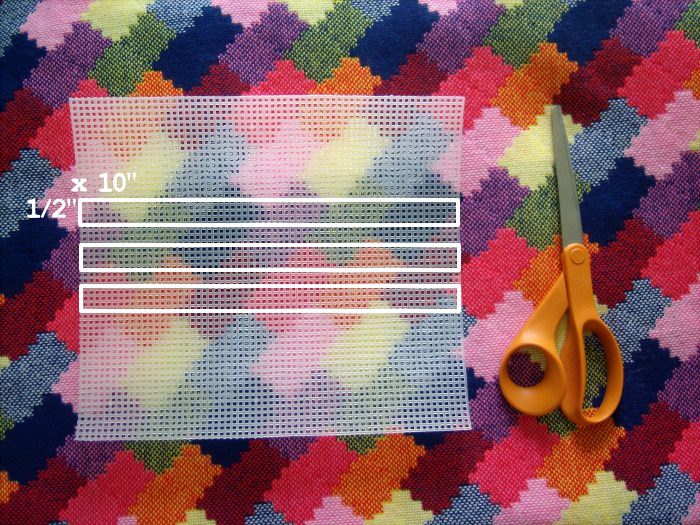 Next, transfer the measurements from your doorway to your plastic canvas and cut it out. I ended up having to piece together my canvas in three 10-inch by half-an-inch strips to match my door measurements. 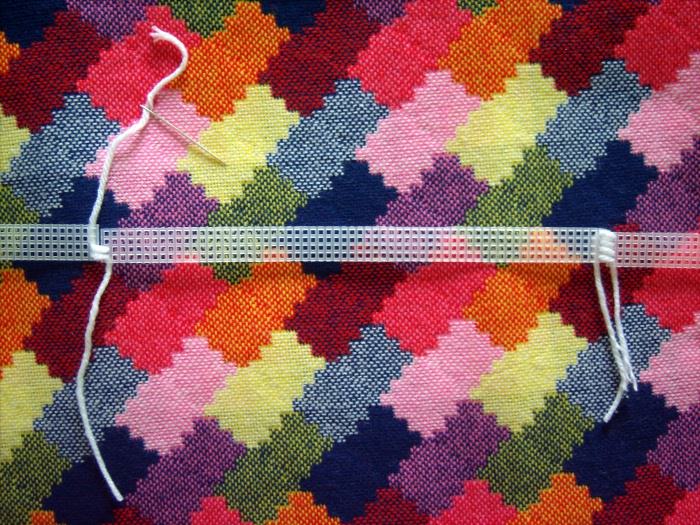 With a needle and some yarn, stitch the ends of the canvas pieces together to form one continuous strip. Tie the yarn ends off and cut away the excess. 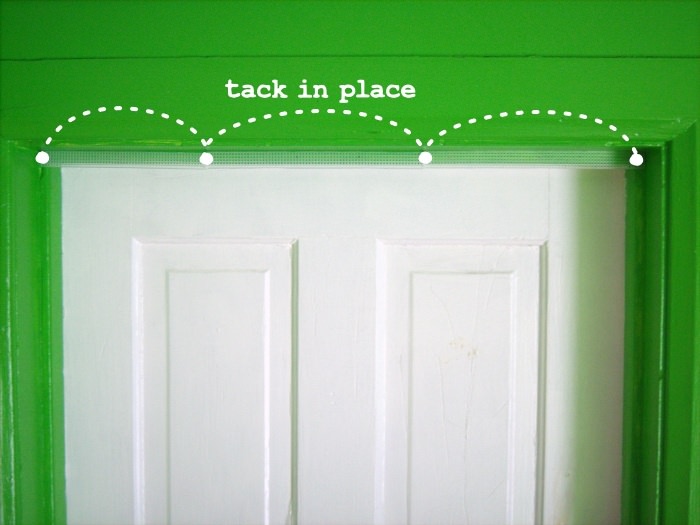 Secure the strip at the top of the doorway with a few tacks. This will be the base, where you’ll hang all of your curtain strands later! 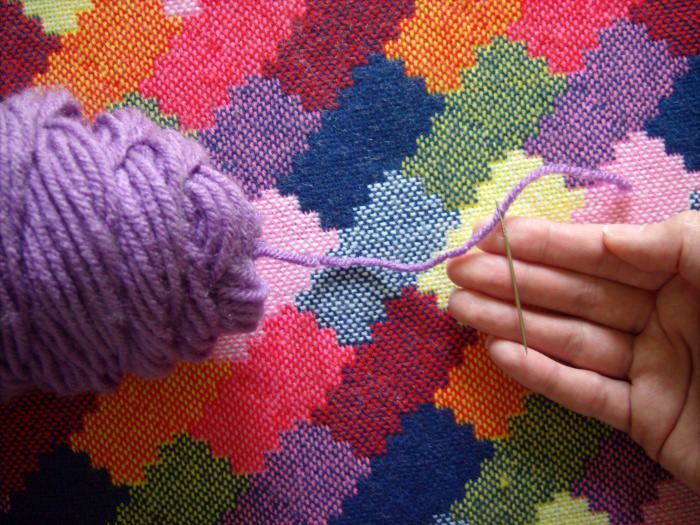 To begin stringing your curtain, thread one end of the yarn skein through the needle. 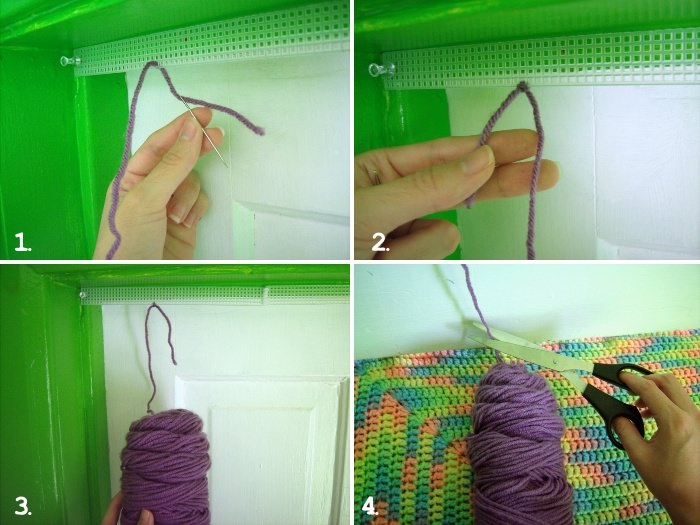 1. Starting at an outer edge of the canvas, thread the yarn through a hole closest to the bottom of the canvas.

2. Double knot the yarn in place and cut away the yarn tail (the one not attached to the skein).

3. With the yarn still attached to the skein, measure out a strand that runs the entire length of the doorway. You can do this by pulling the skein down toward the floor.

4. Snip this strand of yarn away from the skein once it hits the bottom of the doorway.

Repeat 1 through 4 along the entire length of the plastic strip, until there are many strands of yarn hanging: 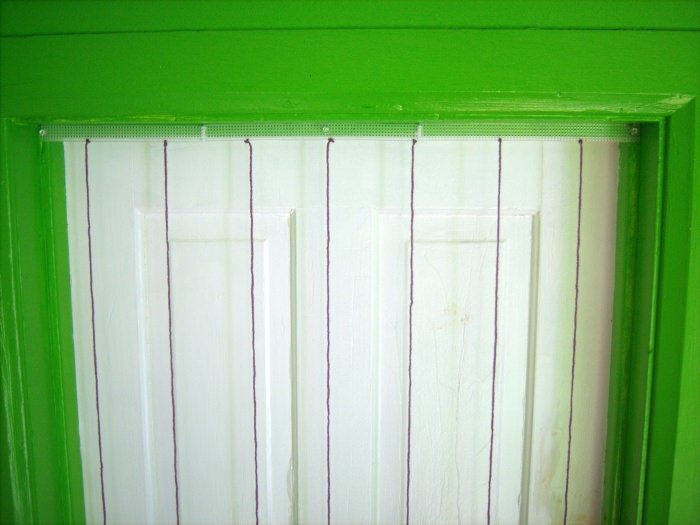 I ended up stringing seven stands of yarn for my curtain, with about four inches of space between each one. Feel free to make your curtain with more or fewer strands, and as far apart or as close together as you’d like. It’s completely up to you! 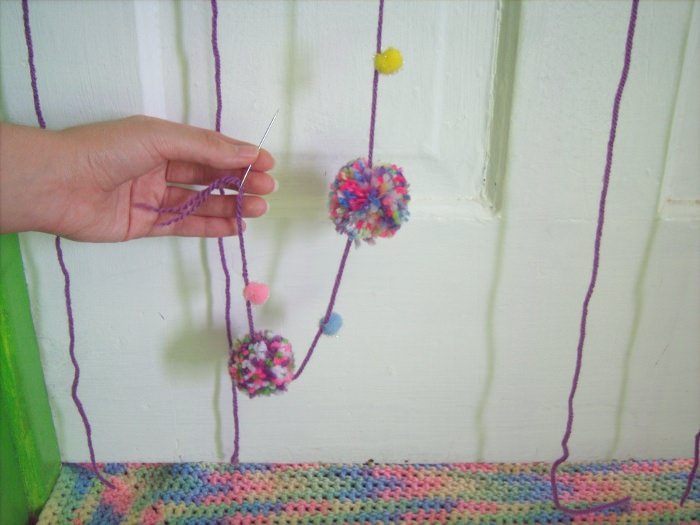 To string the pom-poms, start by working from the bottom of each yarn strand. Thread your needle with the end of the strand and start stringing pom-poms on, just like you would string beads on a necklace. 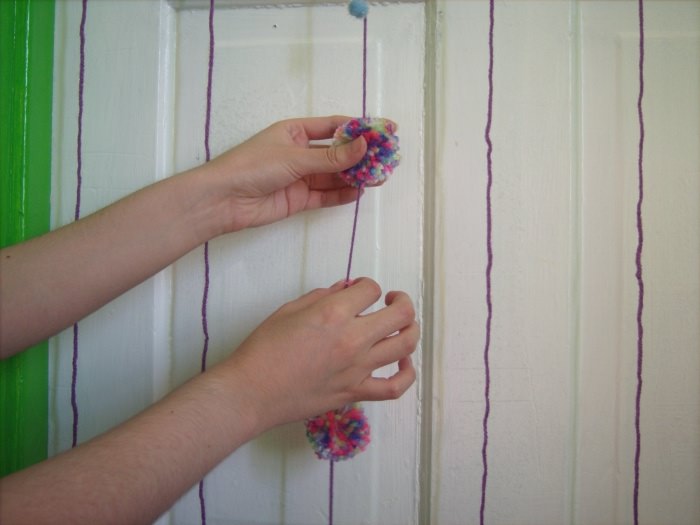 Arrange the pom-poms along the entire length of the strand as you string them. They’re pretty easy to adjust and move once they’ve been strung, and are lightweight enough to stay in place once you have them where you want them. 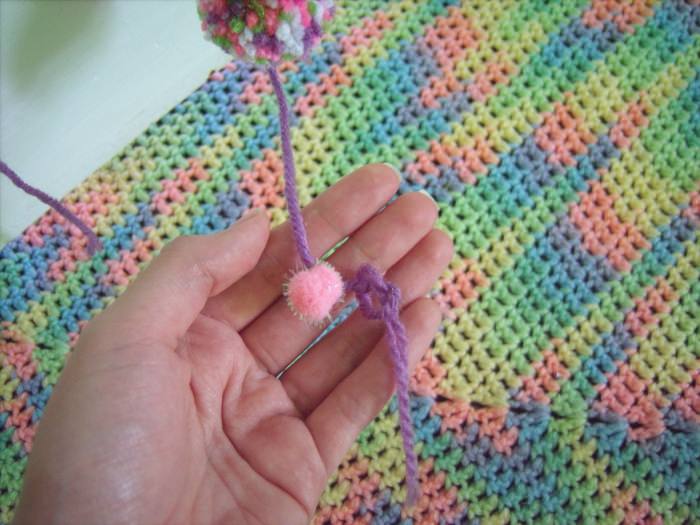 After you’ve strung as many pom-poms as you’d like on a single strand, double knot the end of the yarn and trim away any excess. Repeat the stringing process until you have pom-poms on all of your curtain strands. 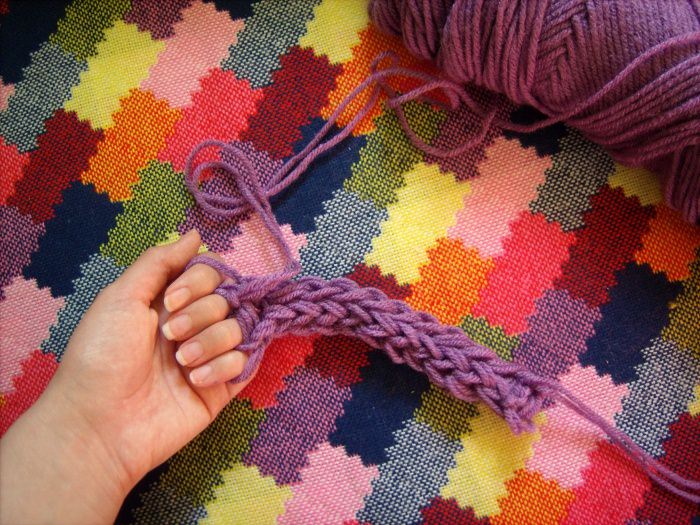 As a finishing touch, I made a finger-knitted garland the same width as my doorway with the same yarn I used for stringing the pom-poms. (Finger knitting is super easy, I promise!) 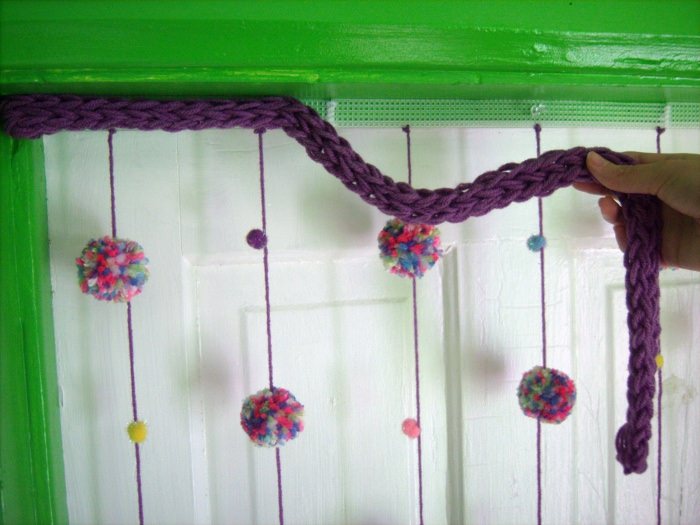 Hook the garland over the tacks to keep it in place, and so that it acts as a cover for the plastic canvas strip. 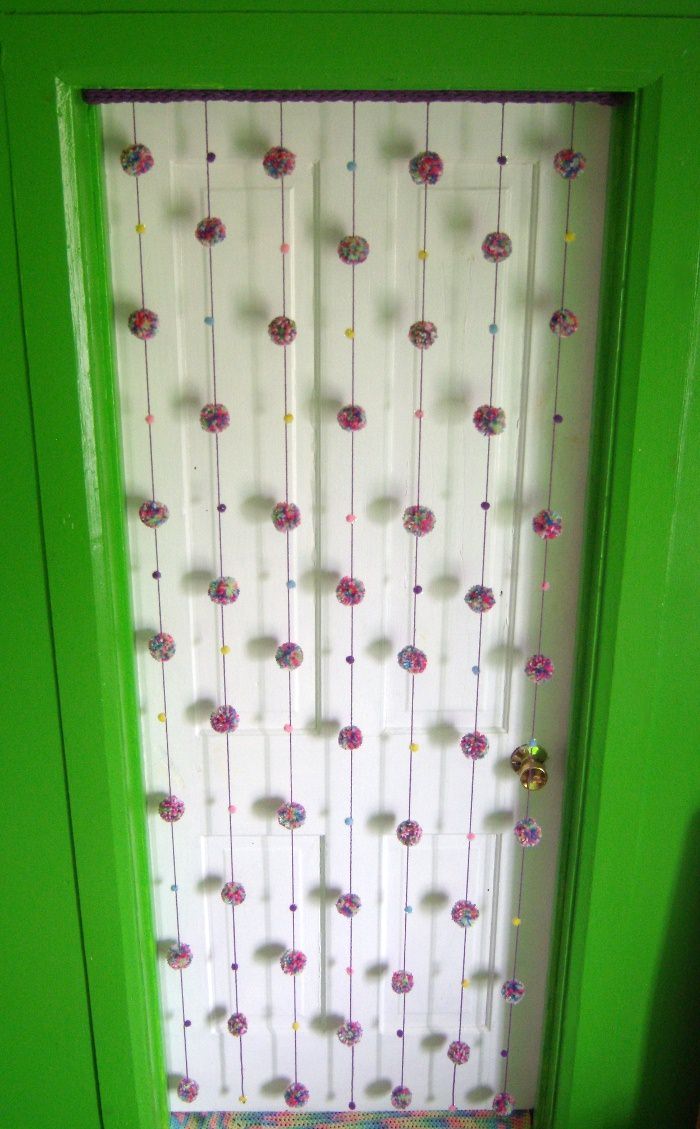