Hannah Gill and the Hours: Change in Blue 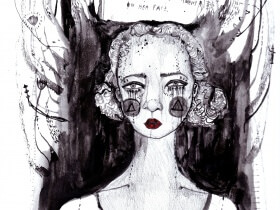 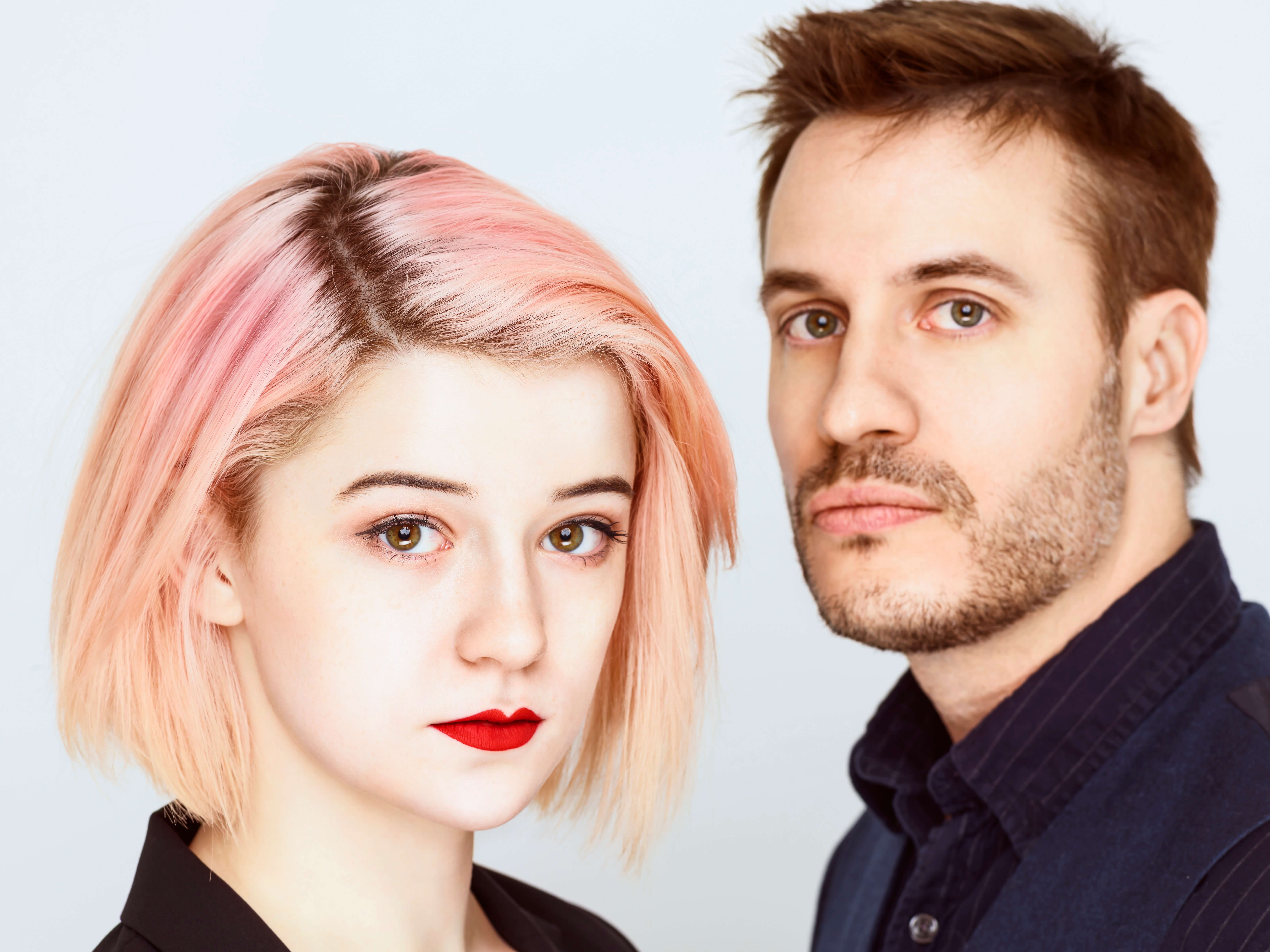 Moving away from home to live alone in a new city is a big step that can bring out feelings of empowerment and freedom. Eighteen-year-old North Carolina native Hannah Gill did that last year, and the experience became the inspiration for The Water, her debut EP coming out on May 13.

Hannah fronts Hannah Gill and the Hours, a band she formed with collaborator Brad Hammonds. Their sound combines low-fi classic rock with haunting vocals in catchy melodies such as “Change in Blue,” which we’re premiering here today:

I caught up with Hannah and talked with her about her love for bands like Cake, taking a gap year, and living alone in New York City.

GABY GLORIA: I saw on Instagram that you’re in New York City now? I listened to the single, and I really like how freedom and starting anew is the main theme of “Change in Blue,” and the rest of your upcoming EP. How did the move bring about those kinds of feelings?

HANNAH GILL: Well, I’m 18. I graduated high school last year, and I made this decision to take some time and defer a year from college. I’ve been working with this guitar player, my partner-in-crime Brad Hammonds, and so I made this decision to spend a year off to make music. I was facing—not necessarily backlash, but other people’s opinions of me taking this time off, which is something that no one really does in my town. That feeling of uncharted territory was something that inspired the album.

Taking time off isn’t something that people in your town do?

No. I mean, I come from a small town, and it’s a great one. The coolest. But from a really young age, you’re taught to get good grades so you could get into a good school and have a good career. Anything outside of those lines seemed like taboo.

What was it like when you first moved to New York?

You know, it was surprisingly easy. I had been coming up to New York for maybe two or three years beforehand, just playing a show and then going back home. I was relatively familiar with the city, and I was looking forward to being up here, but it was amazing. It was kind of like living in a dream, almost.

That’s good! So you started pursuing music after picking up a guitar?

Yeah! I had always been performing when I was a little kid. I mean, don’t get me wrong, I don’t know much guitar. I probably only know six or seven chords. But that was the way I was able to express myself. I started with a ukulele. I got a ukulele for Christmas one year, when I was like 14 or 15, and then I started writing with that. Then I got a guitar, and I worked with that.

I was writing, but I would keep [songs] to myself purely because I thought that they were things I created, and that no one necessarily needed to hear them. When I met Brad, and when I started performing with all these amazing musicians, I got a feeling that I’d never felt before—that people might wanna hear what I had to say in my lyrics. Working with them has definitely helped me realize that.

That sounds really empowering—to know that people might actually want to hear your music.

Your voice conveys so much emotion. What drew you to the soulful sound that you have now?

It’s mainly because of the bands I listened to growing up. I was always really big into jazz—I listened to Nina Simone. I was a big blues fan, lots of B.B. King, and Otis Redding. I was born in North Carolina, and then I lived in Texas for a few years, so being exposed to all the Southern rock and blues affected that. I was drawn to it. When my taste matured, I listened to more Aretha Franklin and Billie Holiday, and Etta James. It’s always been the style of music I was drawn to, and I think because of that, it shows through in the music.

What do you listen to now? Has your taste changed much?

Not really. I’ve always been a really big Cake fan, and I enjoy listening to the Black Keys, Leon Bridges, and Ray LaMontagne. But I think the central theme of—I mean, I love all music, I appreciate it for whatever it is—but I like when you can hear emotion in the voice. Especially because most pop music, or pop music that I’m hearing nowadays, is like people throw music onto a page and tell someone to sing them and they don’t really have the drive or, I guess, grip behind it to really back up the lyrics that they’re singing. I really like when you can hear an artist that you can hear what they’re singing, and hear how they sing it and know if they relate to the lyrics on a personal level. It’s something that I really enjoy listening to.

I read that you decided to sing professionally in your early teens because you realized that you have a talent for moving people with your voice. Was there a particular moment or did you just gradually realize it?

The first time I ever came up to New York was kind of…the experience performing was a complete accident. I did a talent show back in middle school, and I won the talent show. My father was super proud, so he showed the video of the songs I was singing to a group of people that he worked with, and one of them went up to my dad and said, “Hey, my son owns a recording studio up in New York City. Do you wanna take Hannah up as a birthday present and record a few covers just so she knows the feeling of what it’s like recording in studio?” So my dad was like, “All right. Well, she’s a little young now, so we’ll put it off for a few years and then we’ll go up.”

So I remember, for my 16th birthday, we went up to New York City and we saw a Ben Howard concert in Central Park, and then we did two cover songs. I remember when I went to the studio, it was really funny—the guy, Brad Hammonds, who is now my guitar player and my co-songwriter, he kind of wrote it off. Like, “Oh, I’m just doing a favor for my father. Fine, let’s go do this.” But by the time I was done with the first song, he was kind of like, “Oh snap! Let’s get you back out here.” Because he’s been a musician for about 20 years now, and he’s done college tours and all that, but he had songs that he had already written, and he was like, “Why don’t we get you back up and we can record an album?” So the first album I had was all his music. But then because of that, I got the experience of coming up and playing in New York. We kept doing shows, and I started to write my own music. And here we are.

That’s so cool. What’s it like working with Brad Hammonds as compared to performing solo?

It’s actually really helpful because when you’re hearing your own thing, it’s [nice to have] a second person’s opinion. Also, like I said, I’m not very good with instruments. So I can lay out a super simple chord progression, but he’s the one who really takes it a step further and adds some musicality. I mean, he’s like my brother. We butt heads, but it’s all part of working together. But I’m really grateful to have a second opinion.

How did you go about writing the EP?

The writing process is pretty spontaneous. I’m very sporadic with it. I think I wrote “Change in Blue” in 15 minutes at four in the morning. Other songs, like “Against the Wall” took me four months to come up with the lyrics. It’s very hit or miss. But once the song is written—mostly, I do the lyrics, and then I get a basic melody, and then I take it to Brad, and he adds the chords and we kinda start to develop the song from there. It has to be very organic, I think. If somebody really tries to push an album out before it’s ready, you can tell. And I don’t think we have that. Everybody was on the same page. It sounds like nothing I’ve ever heard on the radio.

Could you tell me more about “Change in Blue”?

I wrote it in the sense that I had just moved up to New York City, and I had all of this newfound freedom. It could go from something as simple as I can have whatever I want for dinner, to how here, living on my own, I have a lot freedom. Because of that, one night I suddenly had this huge wave of confidence. The type of feeling that really only hits you every couple of years, where you just feel like you can do anything, and you just feel super confident and super empowered by the idea of what you’re doing. I had that overwhelming sensation, and I had to write a song about it. It was that feeling where you’re so aware of your surroundings and you know that you just…I think the whole song is that feeling that you get when you know that you’re about to do something amazing. And realizing the freedom in that is something phenomenal. ♦