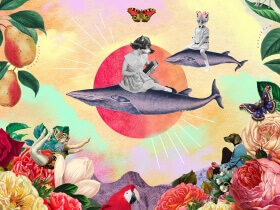 I’ve been feeling really, really bored with my life recently. I’ve run out of things to do. I know using my phone is a weird example but I only use five apps on my phone even though I probably have between 50 and 70. I don’t know, it just feels like I’ve done everything and it’s weird. I don’t really like reading as much as I used to, which is weird because I love reading. But this whole year, all the reading I’ve done was assigned and I feel dissuaded from reading. I also haven’t really been all that crafty. People always say I’m so crafty but even making zines feels kinda forced and I LOVE making zines. I don’t think I’ve done everything there is to do with crafting, but I usually just don’t have the time or money to do the things I wanna do. I also feel like I haven’t really been happy with the music I’m listening to. I’m listening to the same stuff I’ve been listening to for the past six months. I don’t really mind listening to Alex G almost every day but I can only listen to “Trick” so often. I’m in super desperate need for something new, and I don’t really care what that new thing is I just want to not be stuck in this super boring routine. I know that in a couple weeks I’ll be out of school and that’ll give me more time and freedom, yet I also know it’s super possible that I just won’t do anything and I’ll be really sad and bored. Asking people to hang out is always scary for me because I’m so scared of getting rejected. I don’t really know where I got that from but I don’t know I want to do these new things but I’m not putting myself out there! So I’m really frustrated with myself. I hope eventually I’ll just have some huge epiphany and I won’t be this way anymore. ♦