Why Can’t I Be You: Rita Kalra

The space engineer talks about antimatter, rocket landings, and life on Mars.

Doodle Your Heart Out 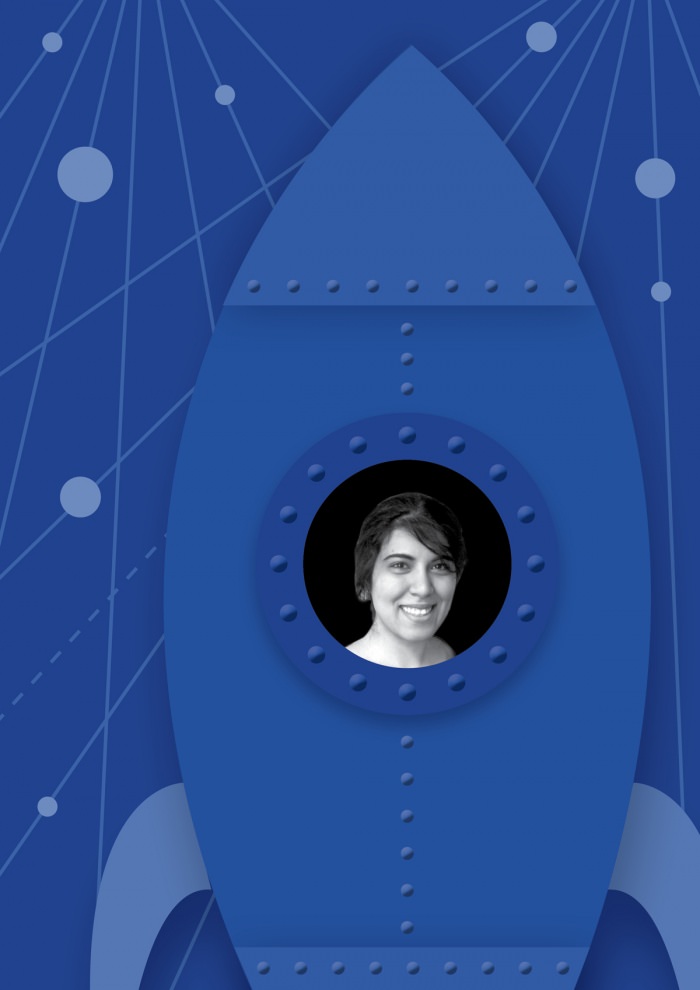 When you talk about the big questions in life, physicist Rita Kalra has most of the same ones the rest of us have. For example: Why are we here? But some other things on her mind are a little more unusual. She’d really like to know why there’s more matter in the universe than antimatter, for one. And lately, her day-to-day concerns have to do with making sure space weather is safe for launching spacecraft.

The Queens, New York native researched antimatter as a PhD student at Harvard, and those studies took her to the European Organization for Nuclear Research (CERN) in Switzerland, where she continued to study antimatter at CERN’s Antiproton Decelerator. Her love of math and physics led her to Los Angeles and a career as an engineer for SpaceX, the space exploration company founded by Elon Musk. (SpaceX made a huge technological breakthrough in December by landing a rocket.)

There was a time when I dreamed of doing scientific research and even going to space, so I called Kalra up to find out what it feels like to help make scientific history happen.

BEVERLY BRYAN: What is your official job title?

RITA KALRA: I’m a radiation effects engineer. That means I predict the ionizing radiation environment for our missions, determine the risk, and mitigate the harmful effects of radiation on spacecraft. The radiation comes from the solar wind and solar storms, the Van Allen belts, and galactic cosmic rays. I track the space weather whenever SpaceX launches a rocket to ensure that it isn’t being launched into a dangerous radiation environment.

Was there a moment when you were younger when you knew that you were totally hooked on science and that this is what you had to do?

Have you answered some of your childhood questions about the world or do you feel like there are still a lot of mysteries?

Oh, there are so many mysteries! Some of my burning childhood questions have been answered, but the more you learn, the more you realize how little you know. One mystery answered leads to 10 more mysteries and it can go on and on. There’s an infinite amount of things that are unknown. It can drive you crazy. But the reason I enjoy studying science is the feeling of satisfaction I get when I learn about some phenomenon in detail, and that it’s not actually magic. And in physics, you are interested in the detail right down to the atomic or particle level. Sometimes what you end up finding out is mind-blowing.

How do you explain your graduate work with antimatter to your friends and family?

The real purpose of my experiment was to study the properties of antimatter in order to answer questions such as: Why is there more matter than antimatter in the universe? It’s one of our biggest unsolved mysteries in physics. Matter and antimatter can’t coexist because they annihilate each other upon contact. The standard model of physics, which is our most successful particle physics theory to date, predicts that equal amounts were created at the Big Bang, but if that were true everything would have been annihilated and we wouldn’t exist. So there was actually a slight imbalance, and the question is why? One way to help answer the question is to measure the energies of antihydrogen, made up of an antiproton and an antielectron, and compare them to those of regular hydrogen. The first step of creating and trapping the antihydrogen is what I studied.

Do you talk to your mom about your job?

Oh, yeah. She’s really, really interested and keeps up with the news more than I do!

Has she been a role model for you?

Absolutely. She studied chemistry and then she became a forensic scientist. She works for the New York Police Department. I grew up learning about all the cool stuff she does and got to visit the crime lab. She goes to court to testify as an expert witness, and she’s developed statistical methods of analyzing evidence that she has to defend in court.

What has been the most frustrating moment of your career in science so far? Was there ever a moment where you thought about quitting and doing English or something?

I definitely had thoughts like that during my PhD research. They weren’t so dire that I wanted to leave the field altogether. There were times when the experiment would break and it would take forever to fix it and it was unclear whether we’d be able to successfully fix it or not. [Laughs] We had some hurdles and some times when we had to work really long hours. The uncertainty of whether or not we would be successful would get me down sometimes. But, in the end, we made progress and advanced science. It’s the nature of scientific research. You just keep working hard and it will probably work out.

What keeps you going when things are frustrating?

What keeps me going is the thought of the big picture. The big picture right now is awesome. It’s space exploration and going to Mars. Also, every successful rocket launch and mission is immensely gratifying. So, I look forward to moments like that. Same with my PhD—I never forgot that I was doing really cool research on a really important question in physics. I just try to think about the goal.

What’s been the most rewarding moment?

I was lucky enough to be a part of two SpaceX landings. That was one of the greatest moments of my life: The first time we landed. I was really proud to be part of that.

My heart was pounding. I was nerve-racked the whole time, standing in front of mission control, just watching the Falcon 9 launch in dead silence. Ten minutes later, it came back to Earth and touched down on the site. The crowd erupted into this deafening roar. Everyone just went crazy.

Do you ever think about going to space?

I would love to go to space. There are space tourism industries, and, if I ever have enough money to do that, I’m definitely on board. The closest I’ve ever been to going to space was on a zero-gravity parabolic flight, on which I also experienced lunar and Martian gravity.

How close do you think we are to living on Mars?

We are trying to get people to Mars in the next couple decades.

Because we have not gone there yet. It would be an incredible adventure for humankind. We’ve sent plenty of landers and rovers there; we have a lot of data on Mars. The next step is to go there. We need to live there as backup in case mankind wipes itself out through nuclear war, or bioterrorism, or goes extinct due to natural disasters.

First, we would have to terraform the planet, create an atmosphere—basically by global warming the planet, melting the ice caps to create carbon emissions. There is already water on Mars and oxygen would have to be produced.

What do you think would help more young women to pursue careers in science?

I think exposure and the way you are brought up really helps. For example, I had my mom. She’s a successful scientist. It didn’t even occur to me until later in life that science was a male-dominated field or that there were different societal expectations for boys and girls. That let me develop confidence in my abilities.

I think the realization that women in science is not unusual would help more young women pursue careers in science. Regular outreach activities through schools that have female scientists come in and speak about their work or allow students to visit at their workplace, for example, would be very helpful. Female science teachers at a middle school and high school level are also a fantastic source of inspiration. ♦