The challenge was to avoid feelings I was too afraid to face. 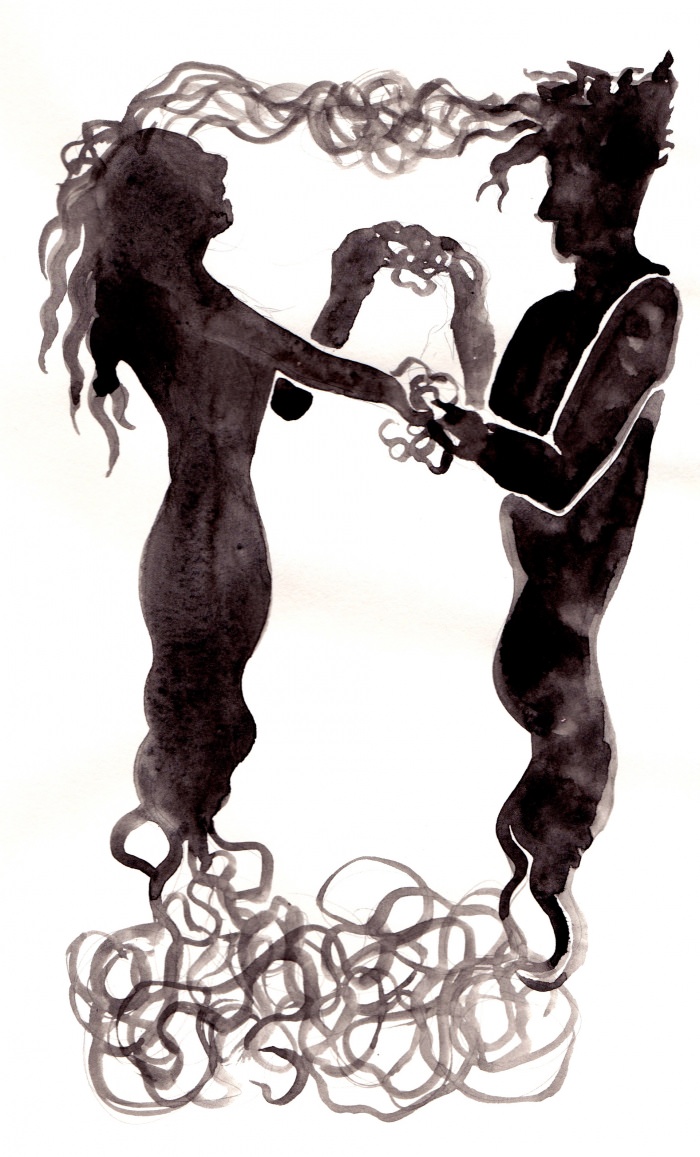 When I was 17, I graduated early and moved to a new city two-and-a-half hours from home with a friend of mine. I wanted a taste of Real Adult Life before I started college, and to prove that I was strong, fearless. Emboldened by our move, my friend and I started taking little risks. We snuck into a hotel to go swimming. We wandered our new neighborhood and hung out with the boys who lived (or maybe squatted?) in “the punk house” down the street. We took late-night drives to surrounding small towns and ventured into the bars on their main drags—though we only dared to order Cokes. We went to the goth/industrial dance night at the local university and waltzed right in even though it was supposed to be for students only. That’s where I first saw him.

He was an extremely tall, rail-thin version of Robert Smith from the Cure. In other words: He was my teenage goth-girl dream come true—even though I joked with my friends about how pretentious he looked that night. He was wearing sunglasses indoors and he kept stopping to make a duck face at his reflection in the windows. But there was just something about him, something intriguing, something that I wanted.

I saw my pretty Robert Smith lookalike again at the same dance night a couple months later. A guy we were hanging out with knew him and invited him back to my apartment. “Robert” got so drunk that he passed out on my hallway floor. We just left him there, right outside my bedroom door. In the wee hours of the morning, Robert crawled into my room. “Stephanie,” he whispered from the floor next to my futon. “Can I hold you? I just want to hold and be held.” I wanted that, too. I’d been in an abusive relationship in high school, and I wanted to move on, be something other than the damaged girl that I believed everyone thought I was—the damaged girl that I feared deep down I would always be. I wanted to prove to myself that I could be intimate, be sexual again. I invited Robert into my bed.

We did just hold each other that night, and all the way until noon the next day. We talked, too, and he ran his fingernails up and down my arm, giving me delicious chills. I wanted this boy and was thrilled by the realization that even though he was older than me and so cool that he seemed out of my league, he wanted me.

He invited me and my roommate to a real nightclub, promising that if we dropped his name, we could get in without ID. We went and we could. It was the first time either of us ordered a real drink and we shared it because we were nervous about how it would be.

He invited us to a party at his apartment. I drank wine and spent the night in his room, on the nest of blankets on the floor that served as his bed. We did a lot more than “just hold” that night. Everything but sex. I got scared at the last minute and told him about my last relationship. He promised he wouldn’t pressure me and he didn’t.

The next few months were a big adventure. Nights dancing at the club (and drinking way more than one shared drink). Bottles of wine shared at the cemetery. Sneaking into abandoned houses. Skinny dipping in the lake. And, once I was ready, lots of sex. I lost myself in this, in my cool, older boyfriend. And then…on the last morning before I left to college, a plan that I’d been questioning because I’d fallen so head over heels for him, he told me, “My girlfriend is visiting this weekend.”

Yeah. He had a girlfriend. One that wasn’t me.

That should have been the end, but it wasn’t. I went to college still hung up on him. I drank every night. I partied hard. I went to a club in a strange city and went home with a guy whose name I didn’t even know until I got into his car. I took a drug-and-alcohol-fueled trip to New Orleans. I kept daring myself to do more and more dangerous things. I told myself it was for the thrill, but really it was a way of avoiding feelings I was too afraid to face.

After a year, I dropped out of school and moved in with Robert. He still had a long distance relationship with that other girl, but we slept in the same bed almost every night and did a lot more than just sleep, hold, and talk. We also went out to the club three times a week, drank every night, and got into spectacular fights. One time the cops even came when we were screaming at each other in a parking lot at 3 AM. I should have been scared of being arrested, but I was more afraid of losing Robert. We made up and I borrowed money from my mom to pay my public disturbance ticket.

This isn’t you!!!! a voice inside of me railed, and after a while I couldn’t drown it out any longer. I told Robert that I’d decided to move back home, go to school, and get my life back together. I figured this would be a prelude to our breakup, but he said it was a great idea and he wanted to come with me. I was relieved. I was too scared to let him go. I’d given up so much of myself in the past few years and our relationship was all I had to show for it. If I could just make it work, it would all be worth it…Except I couldn’t make it work. I focused on school, went to therapy, and worked on my drinking—cutting it out entirely for several months until I felt confident that I could reintroduce it in moderation. Robert continued to party, to drink more, to urge me to join him. If I didn’t, he said I was no fun. When I accepted these dares, I felt awful the next day. Our relationship wasn’t fun anymore, but I was still too scared to end it. That seemed riskier than all of my wild behavior.

We’d been fighting for days (or more like weeks or months) when he went home for the weekend and called me to say he wasn’t coming back. A small part of me panicked, but I swallowed it down. I called my mom and best friend to build up my strength, so I could finally face the truth: Even though I was attached to him and he had defined me and my choices for years, Robert wasn’t good for me. I couldn’t change that, couldn’t change him. The next day he called and tried to get back together with me. I told him that I was already packing his things. I was a little bit sad and a whole lot of scared, but I felt like I had a new future in front of me and it was a thousand times more thrilling than all of my dares, my destructive adventures. That very last dare—the dare to be true to myself—was the riskiest one, but it was that risk that set me free. ♦

alcohol dating live through this moving out older men relationships