Poet Sally Wen Mao shows us around her favorite places on the internet. 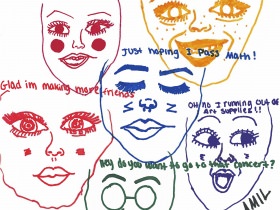 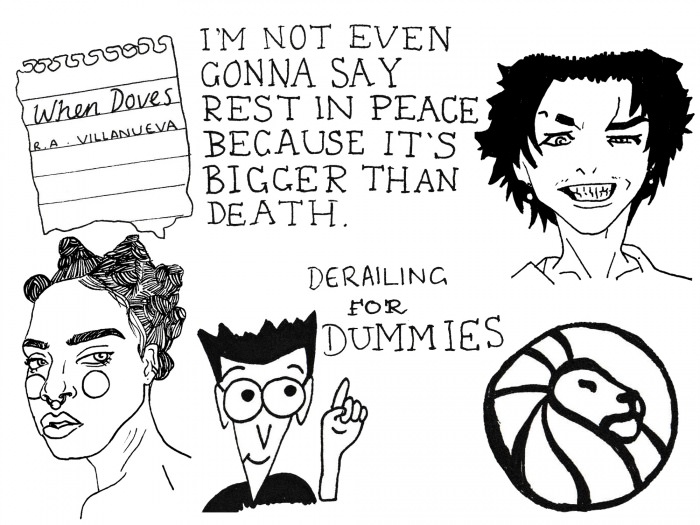 Sally Wen Mao is a poet, teacher, and the author of Mad Honey Symposium. (To get a view of her brilliance with language, please click here.) For this edition of The Deep Web, we invited Sally to take us on a guided voyage through her favorite, under-explored parts of cyberspace. She will show you the way…

1. “When Doves” by R.A. Villanueva and a tribute to Prince by Frank Ocean

When Prince died, I listened to “When Doves Cry” for an hourlong loop and marveled at the way the lyrics could resonate so much with the story of my first-generation immigrant family, and the emotional journey contained there: to navigate a world, alone and cold, and to fear so deeply failing your hardworking parents yet knowing that you’ve failed them already by trying to own your weirdness, your difference, neglecting to live a stable life or follow a status quo. Prince rejected conformity and stepped into the spotlight unapologetically, shimmering in all the ways that seemed impossible. In the ’80s, I existed only in China. I could never claim I grew up with his music—instead, I discovered Prince in my early 20s, and I couldn’t help marveling: He owned his otherness, he owned his differences, he turned them into something that fueled his genius. He turned the freak, effortlessly, into something fine, smooth, cool, daring, beautiful. But no one can say that it’s easy: Because sometimes, there is that part of you who is afraid that you will never belong, that you will always be on the outside, looking into lives that appear meaningful and fulfilled, acquiescing to a set of expectations never meant for you, standing outside houses where the scents of what you cannot eat waft to your nose. Perhaps what I’m getting at is that Prince is proof and reassurance that American music is not about conformity, or safety—it’s those who exist on the outside who can shape the cultural imaginarium in an infectious, original, and wholly meaningful way.

This poem by the wonderful poet R.A. Villanueva references my favorite Prince song, and was prompted by an event at a writer’s conference when it was held in Minneapolis. Behold how language has the power to gut: “She numbers what’s left of her cells/tells us of this burning inside/her knees, laughs a promise to fight.” It tells the story of a still-living haunting that is now a real haunting. Frank Ocean’s message about Prince is one of the most plaintive and deeply felt, and it’s inspiring to read what one generation has to say about the legends, the artists before him, the ways in which roads have been paved, the ways in which we are grateful that our favorite artists exist, so we can be a little more assured, walk with a little more dignity, carry on, live ecstatically, pursue our own dreams in these skins, on these streets, in these cities, despite the world that rejects us time and time again, the world that tells us not to.

In this internet age of fools, we all need a foolproof device to save us from the unnecessary, emotionally taxing, and sometimes painful labor of having to explain to our oppressors how and why they are oppressing us. VOILA! Derailing for Dummies. This website is a perfect tool to save yourself the labor and time of having to type out responses to those ignorant or pedantic hater-losers on the internet. Copy/paste your responses to their condescending rebuttals by mocking them with this handy list of common defensive responses that every oppressor loves to beat to death on forums, comments sections, Twitter, Facebook threads, and every other platform/echo chamber/auditorium known to man!

Two words that fill a nerd with glee: “PUBLIC DOMAIN.” OK, that, or “public library.” The New York Public Library has thousands upon thousands of images and documents in their digital archives, and I found out recently you can search by color, year, location, just about anything. It makes for a very visual experience of researching, browsing, and I’m living for it. Also, NYPL has a pretty sweet Instagram, digging up the ways people asked existential questions before there was ever the Internet.

**Heads up, if you’re at school or within earshot of olds: Some swearing is peppered throughout this vid**

I admit it. In high school, I was a hot-blooded ANIME NERD, the whole shebang: I read fanfiction, scoured the internet for fanart, drew my own fanart, “shipped” fictional characters as if they were my true flesh and blood, ride-or-die friends. If I take a look at my 2005 DeviantArt account’s journal entries, I don’t even understand what I wrote, it’s like coded fangirl lingo that has escaped my vocabulary over the years.

But most of the anime that I truly loved stuck with me. One of the storylines that I always keep returning to is the story of Samurai Champloo, about a trio of misfits who go on a quest to find a samurai who smells of sunflowers. My favorite episode is the “Baseball Blues” episode, which opened my eyes in a major way: It turned the American pop culture game of racial stereotypes in on itself. Here this anime was, audaciously making fun of American racism and imperialism on the shores of the 1800s, using hip-hop references and anachronisms to further subvert the order of oppressive social structures, and that somehow freed me from the shackles of having to always cringe-watch television shows. This was my freedom, and sadly, we still need way more of that freedom, with Scarlett Johansson cast as a Japanese woman in Ghost in the Shell. If there’s ever a film adaptation of Samurai Champloo, it would truly be absurd to cast white actors as these characters (yet if recent history continues, that would probably happen, most likely).

5. Jezebel’s Rihanna Rihport, “Rihanna’s Shadiest/Diva Moments” on YouTube, and “Rihanna and the Radical Power of the Carefree Black Girl” by Hannah Giorgis

OK, this isn’t really “secret internet territory,” because everyone probably already knows that Rihanna lifts us up like a winged goddess from a post-colonial Raphaelite heaven. Rihanna is pretty much one of the only pop stars who doesn’t make a girl feel marginalized for being independent and unattached, for making choices driven not by others’ expectations but her own dreams and desires, for being ambitious and imperfect and three-dimensional. Rihanna subverts so many norms and binaries, her personhood is complicated and not easily definable, and her identity lies not just in her “don’t-give-a-fuck” attitude that eclipses her image, but also in her admissions of being human. Her lyrics are as much about her strength as they are about her moments of emotional ambivalence and uncertainty (“What now?” is pretty much my post-MFA in creative writing mantra). It’s all so plainly there in her music, and one (vulnerability) doesn’t necessarily cancel out the other (strength): This is why I have an unabashed love for Riri and I believe she’s one of the most subversive pop artists of today.

In 2015 and earlier this year, I led a poetry workshop called “Bad Bitch Poetics,” in New York City and Singapore. One of the primary reasons I wanted to host this class was to present my Rihanna Powerpoint; in addition to presenting GIFs, I point out the ways her work, Nicki Minaj’s work, and Beyoncé’s work parallels the writing of radical women of color poets (June Jordan, Audre Lorde, Marilyn Chin, Sonia Sanchez). Poetry has this way of drawing strength and power from intense emotions: Recently, with Beyoncé using Warsan Shire’s poems in her new album Lemonade and Rihanna using poetry as braille on her ANTI album cover, I’m becoming more and more aware of the ways in which poetry intersects radically with music and pop, which draws an amazingly large audience of listeners. The “Bad Bitch Poetics” class focuses on the role of these intersections in women’s, especially black women’s, reclamations of self.

I’m delighted when I see nuanced analyses of Rihanna and her kingdom, such as this Buzzfeed article by Hannah Giorgis, where Rihanna “crafts notably rebellious black female self-determination in this spirit, eschewing propriety in favor of a carefree, self-indulgent womanhood not contingent on respectability. She demands authority over her own body, narrative, and career.” WORK. Jezebel’s Rihanna Rihport also has the right tone when it comes to serious discussions about Rihanna, “the most important millennial of our time.” And this supercut of Rihanna responding to reporters who ask about her status always gives me life:

**There are more swear words in this video, in case that is useful information in this moment**

She flicks her eyes, says “Pardon?,” and vanquishes them with “I’m not looking for a man, let’s start there,” and “Wow, that question was so disappointing,” the perfect responses to these problematic questions—how women, even influential and goddessey women, always seem to be measured by their romantic relationships. Not Rihanna, not here, not now, not today, or ever. Rihanna has built her own empire. ♦

Sally Wen Mao is the author of Mad Honey Symposium (Alice James Books, 2014), a Poets & Writers Top Ten Debut of 2014. Her work has been anthologized in The Best American Poetry 2013 and published in A Public Space, Poetry, Black Warrior Review, Guernica, jubilat, The Missouri Review, and Washington Square, among others. Mao has taught composition, intro courses to creative writing and poetry, and Asian American poetry at Cornell University and Hunter College. She will be a 2016-2017 Cullman Center Fellow at the New York Public Library.