A video premiere and an interview with Emily Nokes—both featuring a heap of love for The X-Files. 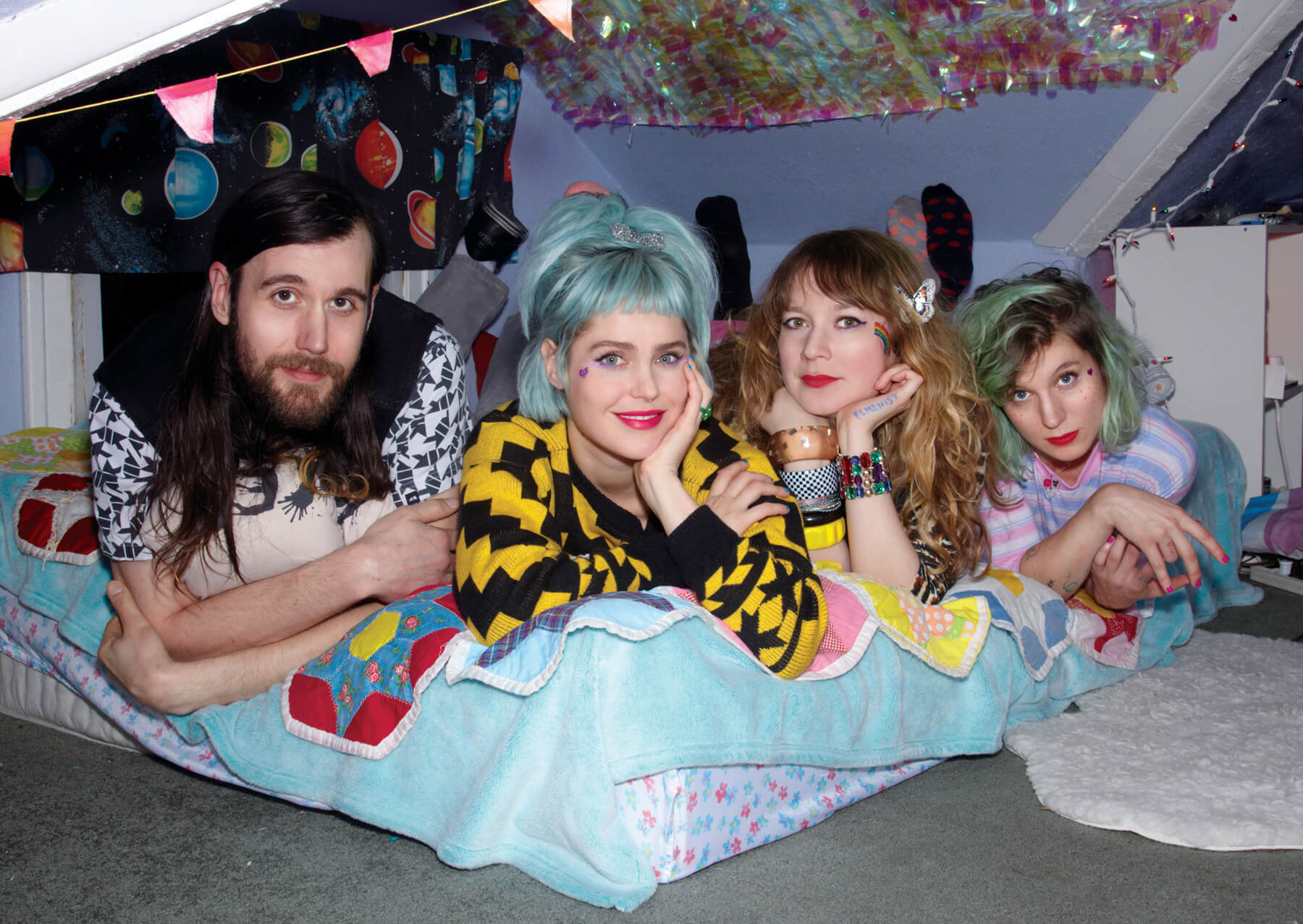 It’d be easy to assume that Tacocat, a punk band from Seattle, would claim 1990s rockers like Kathleen Hanna, Kim Gordon, and Courtney Love as influences. But Emily Nokes, vocalist of the rock quartet, cites a not-so-typical hero: Dana Katherine Scully, one half of the fictional FBI duo from The X Files.

Dana Scully was never in a band. She never wrote “slut” across her stomach in lipstick at a punk show—she’s probably never been to one. Instead, the hard-nosed pragmatist known as Agent Dana Scully dedicates her life to bringing logic and reason to paranormal happenings on The X Files, recently reprising her role in last month’s television reboot. On Tacocat’s latest record Lost Time (another X-Files reference), it’s our sexist and patriarchal society that’s called into question, rather than secret agencies or little green men. And the subject matter is handled with the discerning eye of our favorite shoulder-padded skeptic. Behold, Tacocat’s new video:

I spoke to Nokes over the phone about the new album, and how Dana Scully became her ultimate sci-fi hero.

BRYN LOVITT: Hi, Emily! Lost Time, your third studio album, opens with a tribute to none other than Dana freakin’ Scully from The X-Files. What made you decide to make this particular song the first one on the record?

EMILY NOKES: Well, from the arranging standpoint, we went back and forth on a lot of different combinations on how we could start the album. Our guitarist Eric is really good at zeroing in [on] more of a musical standpoint, especially with energy. But I was happy to have “Dana Katherine Scully” as the first track because I just love her so much. I also think that she’s a really interesting feminist icon from the 1990s. She doesn’t come from this riot grrrl standpoint or anything. In comparison, she’s so Type A.

I’d been watching a ton of old school X-Files around the time that we were writing the album, and I was just like, man, she’s so fascinating. She’s just so deadpan, and the only voice of reason amongst these hard-science men in these fields of law enforcement and science. Even [Fox] Mulder is just so zany, but [Dana Scully]’s constantly the only person who is like, “Wait a minute. Maybe we can explain this.”

I was actually reading that before The X-Files aired, the role of the skeptic was often given to male actors. Women were more often seen as the hysterical counterpart to leading male detectives on prime-time TV.

Definitely. I started reading about Scully after the fact, and I learned that there was an academically studied phenomenon called “The Scully Effect.”

Yeah, where all these young women went into fields of law enforcement and forensics and crazy stuff like that because they felt inspired by her after watching the show. And Scully is rad! She’s serious, but [s]he was never pegged as one of those women scientists who are just totally crazy nerds who can’t get it together in their personal life.

She has great hair and rocks those amazing shoulder pads, which are definitely in need of a comeback in my opinion. Do you consider Dana Scully a style icon?

I do. I mean, I remember when I was in high school, and the style was to wear brownish lipstick. Scully always wears a really interesting maroon shade sometimes, and sometimes it sort of matches her hair, and it’s straight up glam. I really really appreciate that about her because it looks great on her, and it was really hard to pull off.

Oh, exactly. She knew how to do it.

Since the beginning, Tacocat’s music and image have had a pronounced interest in pop culture. It really plays into a lot of your lyrics. Never in a superficial way, but as a ironic frame of reference for social issues.

I was surprised to learn that you actually grew up without a television. Given that Tacocat recently recorded the theme song for the Powerpuff Girls Netflix reboot, I assumed you were a lifelong TV junkie like the rest of us.

No. I was definitely a reader, because my parents are, like, anti-television. But my bandmates—Lelah [Maupin] and Eric [Randall], who both grew up in a small town in Washington called Longview—were rabid about it. There will sometimes be conversations in the band room where I’m like, “What are you talking about?,” when they’re going on about some short-lived VH1 show and stuff like that.

Growing up without a television was, I think, similar to how I wasn’t allowed to have a lot of sugar. Now as a full-grown adult I’m just like “Sugar, sugar, sugar!” I love it so much, even to this day. Same thing with TV.

Back to Dana Scully—the star of this conversation—I just find it very interesting you start the whole album out with this tribute to her, and then echo your admiration for her in the other songs on the album.

So there’s this whole theme in The X-Files of Mulder exhaustingly looking for his sister who was abducted as a child. He’s just like, “Samantha Mulder, I’m gonna find her.” And Scully is like, “OK, dude, I’m on board with a lot of your instincts, but you have to let this go at some point.” It’s not that Scully isn’t a happy person or a fun person, because I think that’s another thing that she gets pegged as because she is practical. She deals with this contradiction the entire time. You know, she wears her mom’s little cross around her neck and stuff, and she’s a hard scientist.

So you’re saying Scully owns her contradictions? That’s actually a line in the song.

Definitely. What I love about her is she can just be elbow deep in an alien autopsy, and still be like, “You know, we might be able to explain this as not being an extra terrestrial.” She also talks about not believing everything you see. I think she grew up Catholic. She’s consistently like, “Yeah, this is who I am,” [but] she gets questioned more than Mulder or Smoking Man, or all these other way more ridiculous characters. They’ll ask, ”Don’t you realize that these two things contradict each other?” And she’s like, “Yeah, whatever, still the smartest person in the room.”

Even in the show, people mistook her suspicion and skepticism of the paranormal as her being prudish and uptight. A complete double standard.

Healthy skepticism is so prevalent in Tacocat lyrics. Your songs are wildly skeptical about patriarchal society and how it’s important to not just trust the status quo.

Definitely. That’s been a running theme with I think all of us as long as we’ve known each other. The ability to see that and call it out in a way that has a sense of humor about it. Patriarchal society hates being laughed at. If you’re laughing at [it], it’s like, “No you can’t use this against me! You can’t do this against me!”

Feminist humor has always been very subversive. In your last interview with Rookie, talked about finding a balance between being funny and writing lyrics about social issues. Do you see humor as a form of rebellion?

Definitely. Satire is one of the most powerful things I think that we have as a society. It’s framing things [to] show people who they are in a way that they might not be able to see.

I also think [Dana Scully is] really funny! She’s especially funny because she’s not constantly falling back on her goofiness or anything. Even just her facial expressions—there’s something about the way that, when all these men show up she exudes “get out of the way, here I come, I’m gonna solve this so everybody shut up.” ♦