I was flat-out afraid to go to bed. 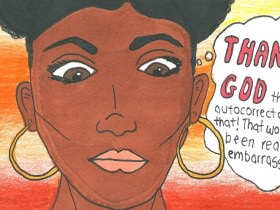 Literally the Best Thing Ever: Autocorrect 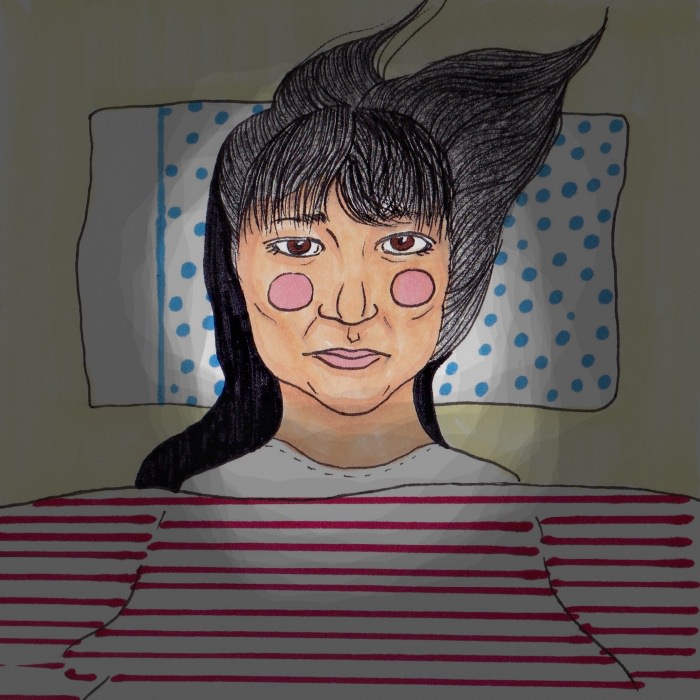 I was a junior in high school when I got the most stoned I had ever been in my life. I splayed my limbs on my bed, put my headphones on, closed my eyes, and drowned my brain in the lushness of Air’s “Sexy Boy,” which is a song that kinda goes on forever when you’re under the influence of marijuana. My body felt both weightless and elevated at that moment, the way I imagine an otter’s might float peacefully in a still pond. The actual song is just under five minutes long, but I zonked out well before it ended, in the vortex of supreme highness. Or, at least I thought I did. Unbeknownst to me, I had entered the brief and terrifying world of…(cue Twilight Zone theme music here)…sleep paralysis.

Suddenly, I was wide awake but unable to move my body. It felt like someone—or something—was holding me down and sitting on top of me. The pressure was heavy enough that I was a bit short of breath, but not so heavy that I felt crushed. It was as though this “thing” was trying to get comfortable, sitting, adjusting itself, getting up, then sitting down again, using my chest and torso as its lumpy seat cushion. I wanted to push this thing off me, or try to roll over, but I couldn’t move a muscle. Every part of my body, down to my fingers and toes, were frozen. I also thought I was screaming out hysterically for help, but no one ever hears me in this psychological thriller that is my own life. I could only see from the angle where I was laying on my bed but I felt my heart race as I thought there was some kind of demon-monster-spirit-ghost lurking in my room like the way my brother did sometimes. Too bad it wasn’t him. Mind-body fuckery be damned. I was all alone in my bedroom, which I was convinced was straight-up haunted.

I eventually wriggled myself out of my frozen state after putting up an internal fight with my body to move. Sleep paralysis usually only lasts for a few minutes, but in the moment, it can feel far longer. As a teen, I was already used to my body not cooperating with me on a daily basis, but this was some next-level shit. It was also a pre-Google era where I couldn’t simply go on the computer and type “can’t move sleep,” which would have immediately yielded sleep paralysis results. I didn’t know how to articulate to my barely English-speaking Korean immigrant parents that I was, like, asleep but awake but couldn’t move and it felt like something was sitting on top of me. And there was no way in hell I was going to tell any of my friends about this freaky happenstance, simply because I thought I sounded nuts even thinking about what I would say. It was probably some bad weed, I shrugged off. Except, the hallucinations kept happening semi-regularly from then on, sometimes multiple times a night. It wasn’t until a few years later, via the internet, naturally, that I was able to figure out that the symptoms led to sleep paralysis. (It also made me wonder how I figured anything out before the days of the world wide web.)

The actual science behind sleep paralysis is that the brain and body are not synced up as you enter or come out of REM sleep. Usually when you’re horizontal for a slumber, the brain sends a signal to the rest of the body to relax all the muscles, hence the immobility. But sometimes the brain isn’t yet ready for sleep-mode and your eyes are open—cognitively, you’re wide awake AF. It’s at that strange moment when sleep paralysis kicks in, when your brain is like, Hey, we’re still open for business, but the body is like, Peace, I’m out. What’s bizarre is that the mighty brain can’t just interject and make the body snap out of paralysis (because, after all, the brain is the one telling the body it’s time for sleep). But as humans, I suppose we don’t make the rules on how our bodies work.

Knowing what I know now, sleep paralysis is one of the most normal/not-normal occurrences. It’s normal in the sense that, apparently, more than half of people will experience this phenomenon at least once in their lifetime, though it may be so subtle that many won’t even realize it happened. It’s also not entirely normal to experience this disorder on a multiple-nights-a-week basis either—which in that case, it may be worth it to check in with a doc about other sleep disorders, like narcolepsy. Sleep paralysis also generally onsets during the teenage years and can carry on well into adulthood, and can roll through without any sort of warning like an uninvited house guest (of your own damn mind). There’s also no real treatment or cure for sleep paralysis, but the good news is that you’re completely safe from harm during this experience. It’s kind of like having a nighttime panic attack where all you can do is wait it out, as much as that sucks.

My sleep paralysis, at one point, was so stressful that I was flat-out admittedly afraid to go to bed. Before my first episode, sleeping was no-question my favorite hobby, but it quickly turned into a begrudging chore knowing I’d have to relive the same body-freeze nightmare over and over. I lurked on AOL Instant Messenger to chat with other insomniacs until four in the morning. I constantly begged my mom to sleep in my bed with me. (She not-so-politely declined every time.) I snuck into my brother’s room and slept on his floor far too many times. It turned into such a vicious sleep-deprived cycle that all areas of my life suffered. I would advise against all of these poorly thought-out tactics.

I finally got my sleep paralysis under control through a regular sleep cycle, which seems counterintuitive, but it worked. For me, exercising and staying active helps. I’ve found that getting in a lot of sleep, like close to 10 hours or so, helps regulate my body. Sleeping in a position other than supine—which is basically laying all corpse-like and vulnerable—is strategic for unwanted “demon sit-ons.” Finding a cuddling bedfellow to entangle all your limbs with is my favorite way to divert body immobility (for the record, I’ve never had sleep paralysis as a “spoon”). Masturbating right before snoozing has also been a helpful maneuver since it’s a pleasant activity to do from the comfort of one’s own bed. I’ve also personally turned my nesting area into the ultimate sanctuary with fun bedding, banging pillows, and a handmade quilt, all of which brings me joy every time I curl in for the evening.

I still get sleep paralysis several times a year, mostly in waves. But still, it’s a tremendous improvement from the yesteryears when I experienced it nightly. The act of sleeping—a long, blissful, around-the-clock deal—should be valued as a real necessity, no matter what kind of sleep cycle you personally prefer and implement. Nothing brings me more joy than awaking for the next day, with all its potential ahead of me, after a peaceful night’s rest, without any interruption. ♦