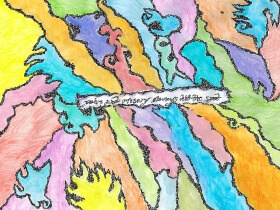 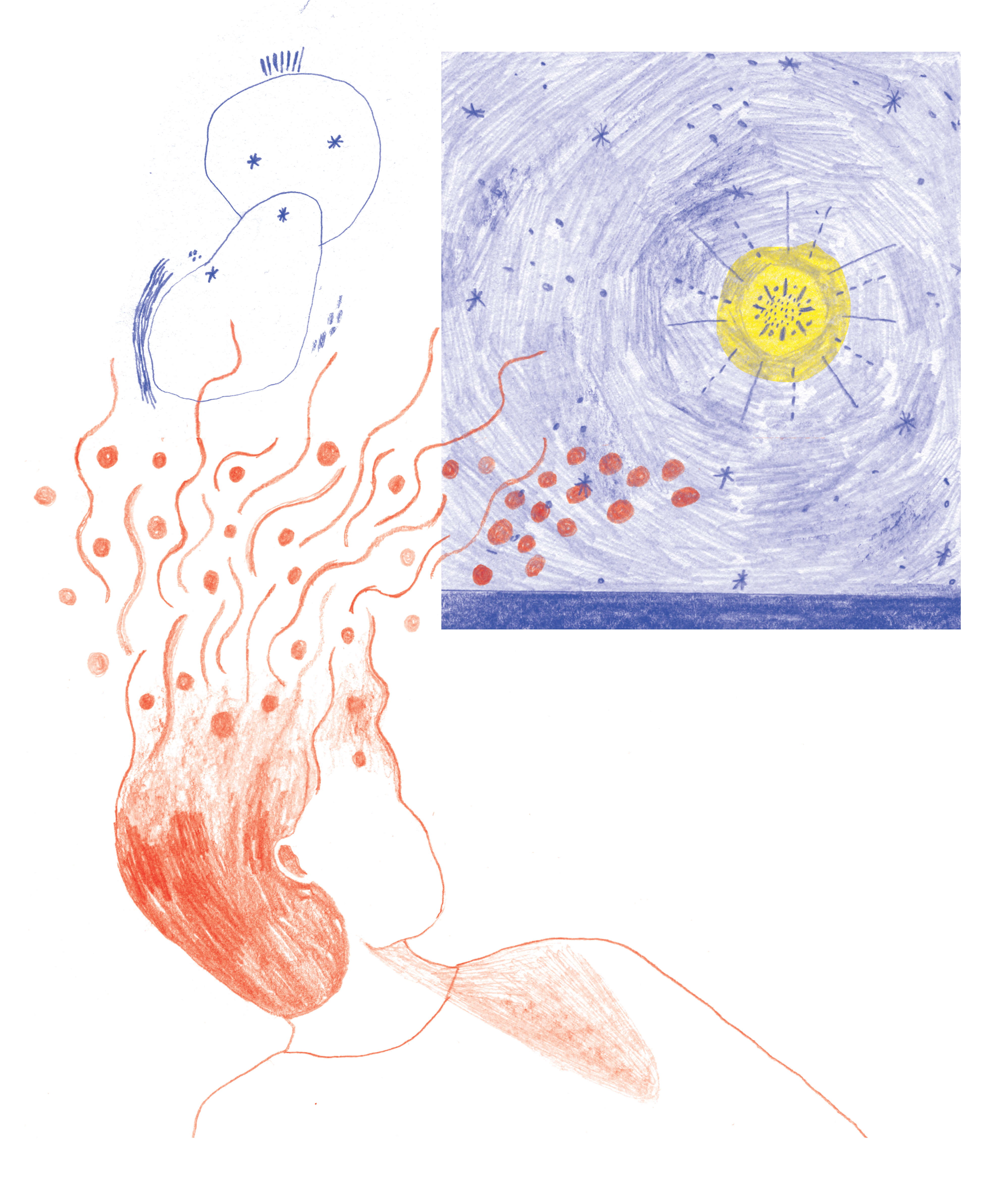 I don’t like throwing things away. By “things” I don’t mean chairs, or blankets, or pants that are too small—I mean boxes of collected scraps and objects from all sorts of different events and times of my life that possess sole sentimental value. Hundreds of scraps of paper and little glass or plastic objects and broken knick-knacks that appear as useless garbage to everyone except for me. Which is why I have all of these scraps and objects neatly organized and packed away in countless boxes labeled “TOVA’S MOST PRECIOUS BELONGINGS! DO NOT TOUCH! DO NOT TAMPER WITH!” This warning is not just an exaggeration meant to scare my siblings away. What seems like pieces of trash to everyone else are objects that hold all of my stories, both significant and insignificant, ones worth remembering and ones not. It’s not so much the fear of letting the thing itself go, but rather a terrible fear of losing whatever time or memory the object has come to signify. For reasons I don’t understand (yet am ruled by nonetheless), I am absolutely terrified of forgetting things, terrified of how easy it is to do so. I can’t even remember what it felt like to be the person I was just a few years ago, and I’m so quick to forget rules or words or ideas that were once deeply important to me. When this happens I feel reassured by the museum of useless objects I’ve kept, the boxes that store all my memories and stories for me even as I forget them despite myself.

Most of me understands that forgetting is just how life works. We constantly accrue experiences and thoughts and partners and these new additions come to displace the old. Most of me is fine with this. It’s nice to finally grow past the painful periods of my life. It’s nice to know that I don’t have to remain tied to the identity and opinions of the person I was three years ago and four years ago and 10 years ago. But, while most of me happily accepts the changes and replacements each year brings, a tiny part of me rejects them. This tiny fearful part of me rebels against the displacing and replacing of memory and identity by tucking scraps and things away in corners of my desk, or drawers, or stacking them into boxes and hiding them away in closets. In an attempt to parse through all the possibilities, or the memories of different selves, I’ve written about a few of the objects from my personal archive of strange little signifiers. “Signifiers” is not necessarily the same as “significance,” though the two are dangerously close.

1. A painted glass swan container full of my baby teeth 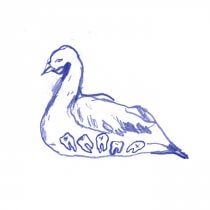 My mother gave me this glass swan-shaped container when I was six or seven years old, and at that time I considered it the most beautiful thing I owned. I had a strange habit back then of considering different objects as having emotions (I still do this) and would organize them in my bedroom according to what I perceived to be their emotional depth. To me the swan had a particularly deep capacity for feeling and absorbing—which may or may not have had something to do with the pink flowers painted over its feathers—and so I placed it on the shelf over my bed that I called “the special shelf.”

I’m not sure why I started placing my baby teeth inside of it. I think it was because the glass swan seemed to be the only worthy container for holding these former body parts, and I thought my baby teeth were very significant markers of transition. It seemed important to me that I keep the baby teeth as they came out of my mouth, and so I would never wash them of their blood before tucking them away in this delicate glass container. (Till this day they’ve retained traces of dried blood!) It still kind of amazes me that our bodies shed teeth and grow new ones in, and for me the baby teeth locate a whole period of my life when my body was changing in drastic and obvious ways. 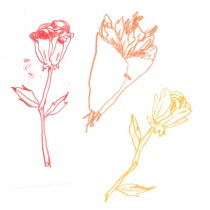 Dried flowers can apparently last a very, very long time. I’ve only received flowers three times in my life and I saved the flowers from all three occasions. I might have thought to save them because it’s something my mother does: She dries all the roses my father ever gave her and arranges them on top of a cupboard in our dining room. I’ve always thought this to be the perfect combination of tender and sad. I saved the dried rose from my fifth grade teacher because I was completely surprised she gave it to me in the first place (I was a terrible student). Once I save something I can’t throw it away, even if it stops feeling significant, and so I’ve saved the rose even though I’ve forgotten all about my fifth grade teacher. The Bas Mitzvah rose made me feel very grown up. It seemed so appropriate that I was receiving such a grown up gift like a rose on the day I was supposed to be becoming a woman, and so I stored it beside the rose from my fifth grade teacher. My first boyfriend gave me the bouquet of flowers for my 18th birthday, and I kept them over a dresser in my bedroom for years where they would occasionally rain down dried petals and crumbly leaves. Finally, I packed them away next to the dried roses.

3. 10-plus years’ worth of notebooks, journals, diaries, and sketchbooks 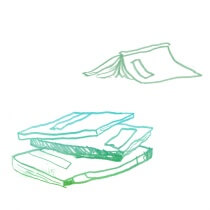 I began keeping diaries and journals in second grade. I was never really scheduled about these. I wrote in them when I felt like it, and the entries range from drawings to diary entries to stories to poems. A lot of the second grade entries consist of long fantasies about not having to go to school ever again so I could read books in bed all day and becoming invisible so I could pull off my teacher’s hat without her noticing. Writing in diaries and keeping a journal has done various things for me throughout the years, the least of which was to make me feel like I exist, or that things matter and that my feelings exist and matter, and that they will continue to. These writings also serve as a constant collection for me to reorient myself against or in relation to. At one point I considered throwing away two or three of these notebooks, which held the most embarrassing, drippy poems, but I decided against it—they still hold some self I don’t want to throw away. Around 2014 I read I Love Dick for the first time and my diary keeping shifted into letter writing. Three of my journals are beautiful leather notebooks filled with these letters.

4. A shoebox covered with duct tape 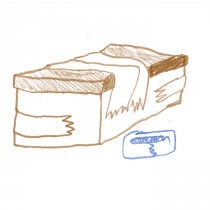 When I was 15, I took every piece of paper or document having to do with traumas, hospitalization, et cetera and taped them up into a shoebox using an entire roll of duct tape. For a while I gave the box to a friend so she could store it in her house for me. At the time it felt really good to physically remove any object that was associated with bad or painful memories and render them inaccessible. After a few years, I asked for the box back. Even though I don’t like to look inside it, it feels necessary that the objects having to do with shitty parts of myself and a thorny history are all stored and taped away among my belongings. If these papers and documents are my identity materialized in objects, saving them while storing them far away is an all too poignant and somewhat lazy metaphor for the ways we clumsily grapple with the various traumas in our lives.

5. The top of a pizza box that says, “Happy birthday boo” on it 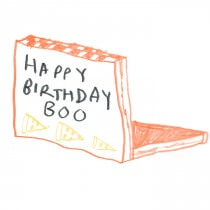 This one I really feel that I should throw away, even though I know I won’t be able to bring myself to. The pizza is from my ex’s 22nd birthday. We were long-distance at the time, so I ordered a pizza to be delivered to his house and asked them to write “Happy Birthday” on the box. The idea to order a pizza for a person in another state actually came from another friend of mine, who ordered me a heart shaped mac ’n’ cheese pizza when I was going through a breakup. My ex—who is as petty in his sentimentalism as I am—saved the top of the pizza box. When we broke up he gave me all my things back in a big cardboard box and I found the pizza box among them. It’s hard to throw away things that are connected to a person you once loved. It’s not just letting the other person go; it’s letting yourself go, or the part of your identity that gets formed by those memories and the people who have touched your body. Objects like pizza boxes come to exist as containers for all of that. 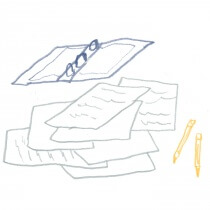 These take up so much space among my museum of suffocating sentimentality. When I was younger I thought I was keeping them to show my children (possibly because my parents saved their school papers, and I delighted looking through these). Now I tell myself I’m saving these papers “in case I ever need them,” whatever that means. I do have this secret fear that my computer or hard drive will break one day and then I will lose everything. Even though I know it’s irrational, saving hard copies of all the work I’ve done throughout school and university comforts me. Still, I think hoarding my school papers is the most useless and compulsive hoarding habit I have. 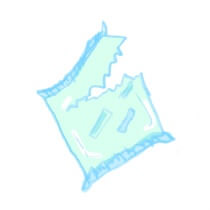 I’ve saved this object for last, given that it’s the most recent and the most shameful. It’s a bright blue condom wrapper from a night with a friend I recently started to fall a little bit in love with. He came to visit me, and when he left, I felt so confused by my mess of unsure feelings that I began moping around my bedroom viewing everything as residue of him or our time together. It took me three or four days to finally wash my sheets and clean my bedroom, and for some reason I couldn’t bring myself to throw the condom wrapper away, so I stuck it on my wall while I cleaned. Of course I forgot to take it down, and the next time someone came over they made some comment about me “collecting trophies from boys I’ve slept with.” I was embarrassed but still couldn’t throw it away, because in addition to the inherent significance, the condom wrapper now had an added memory attached to it. This is how the objects always work for me: Even if I can’t remember where it’s from or why I collected it in the first place, the thing still remains significant by the fact of my inability to remember, or failure to attribute it with significance. In this way the things store my stories, locate my memories, but are amenable to my new stories and newer memories. ♦