The premiere of a beautifully intimate DIY music video. 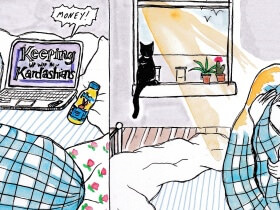 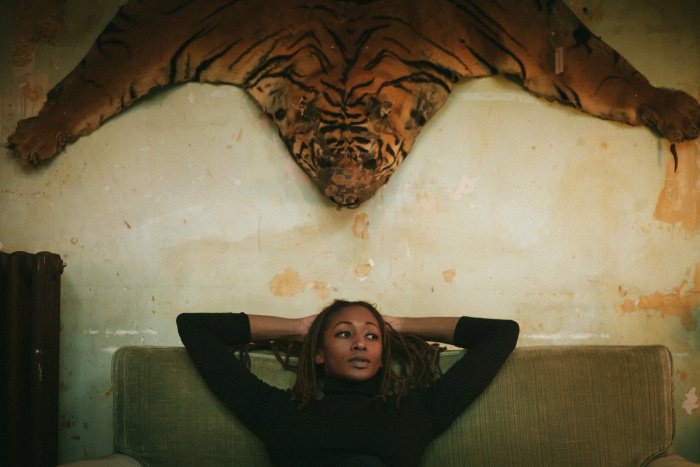 As soon as I heard ALA.NI’s “Darkness at Noon,” I imagined the opening credits of a dark Western film directed by David Lynch. Looks like I was on to something, as the London-based singer notes Lynch as a great influence on her work, including the music video she made for the aforementioned song:

If you like what you hear, you’re in luck because there’s more on her debut album, You and I, which comes out June 3 in the U.S.!

Before releasing her own haunting-yet-sweet material, ALA.NI studied at London’s Sylvia Young Theatre School and sang background vocals for various artists. Not too long ago, I caught up with ALA.NI about directing, and how she catalogs her thoughts and maintains focus.

CHANEL PARKS: What were your influences for the “Darkness at Noon” video?

ALA.NI: I am a big David Lynch fan. The way he can transport you into a different land, welcome you into his world, is just such a powerful thing for a human to possess. Maya Deren, a surrealist director, is a big influence, too. Very experimental. Alfred Hitchcock is a master. I learnt from him the idea of working with restrictions.The technology wasn’t around in those days to create the effects that he had in his imagination, so he found his own way and style to still achieve those mind-boggling shots. Genius! He was also said to storyboard everything, which is what I try to do.

As a director of your own videos, what do you most want to convey to the audience?

A little peep into something intimate. It’s just me and an iPad. Usually in my pajamas, ha! My videos are the most creatively selfish and “don’t give a fuck” I can be. That’s why I love doing them so much. Of course I do my ultimate best, but I do most of my videos in a day—including the edit sometimes, too—and then I get to let it go. Music is not so easy an expression to just release from my hands.

What made you want to direct your own videos? I love that you do that!

I have, from a very young age, always loved photography. I used to pile loads of friends into photo booths and make albums. I did a film editing course a few years ago to help me understand the process better. Making videos is just me transferring my photographic eye into moving imagery.

What did you listen to growing up?

My dad played bass in reggae and calypso bands. I went to Sylvia Young Theatre School, where I sang mostly musical theatre, and anything and everything in between. I try not to discriminate or plug myself into just one style of music: It’s limiting for me and my brain. Right now, John Jacob Niles is killing me with his voice and tone, and the Ink Spots are my “new” favorite boy band!

I read that some of the music you write comes to you in the middle of the night—how do you catalog those thoughts?

It’s a fucking pain in the arse. I sometimes have to wake up in the middle of the night and write five poems in row to just get the surmounted words of the day, week, month out of my system. I keep a diary and a dream book, too. All my best song ideas seem to come to me at around 2 or 3 AM. The city sleeps, so I have more space to think I guess.

I try to have some kind of writing and recording device nearby at all times. Failing that, I say to myself, “If I can’t remember it in the morning, then it wasn’t good enough,” which I never do, so I’ve learnt to take the moment of inspiration whatever time it comes. I only sleep around four hours per night, so it doesn’t really make much difference. 24-7 music making!

It’s interesting that you had a hard time landing gigs because you sounded “too English.” Can you expand on that experience? Especially as a woman of color who goes against any weird stereotypical notions that women of color can only sing R&B.

I was singing for a backing vocal agency, and they were sometimes told after an audition that I sounded too “English.” Too white. I guess they wanted more of the stereotypical black gospel female singer. Another time I was told that you can’t break a vocal run or adlib. Like, who invented these rules? And if they exist, then why shouldn’t they be broken? Music should be consumed without the judgement of color. It’s the universal language. Black Sabbath is pure [soul] to me—“Changes”! Their music is full of blues, funk, hip-hop, and real R&B melodies. White boys from Birmingham. Fuck color. Give me heart!

What advice do you have for people who want to shape their own artistic crafts?

Focus 100 percent into the art. The rest will fall into place. Nothing exists without the substance, the detail, the art. Art comes first! And of course, never give up. You never know when that moment will come. ♦