How to Have a Tough Talk With a Teacher

Tips for successfully standing up to authority figures. 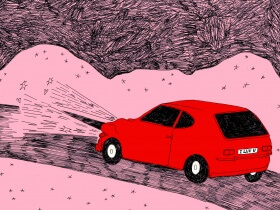 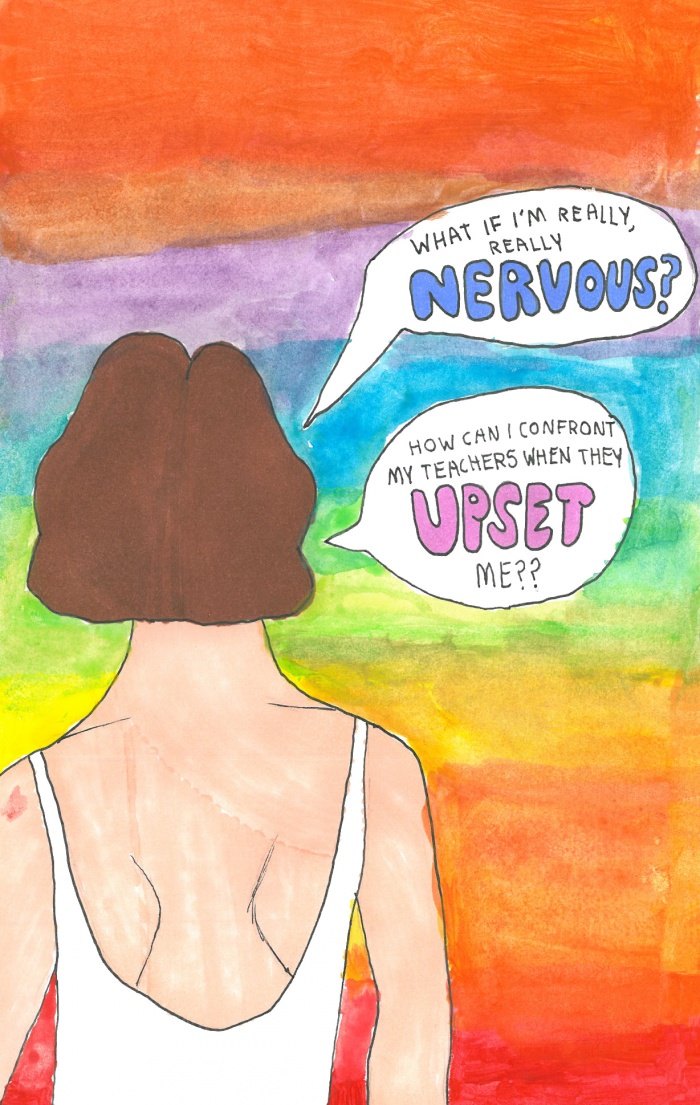 I used to think I was the only person who’d ever felt let down or disrespected by a teacher. Then I realized that everyone has had, or has, that one teacher who just doesn’t listen and really gets under your skin. Luckily for you, you’ve got an expert on your side!!! (Says me, in an exaggerated commercial-announcer voice.)

In this dreadful year of middle school that I currently endure, I have had plenty of problems with teachers. Most of them started just after the winter holidays. Over break, a friend of mine had a New Year’s party. A lot of people I didn’t really like were going, so I politely declined the invitation. (Starting the New Year with takeout and a movie was much better than a slimy game of Spin the Bottle, if you asked me.) As I predicted, there was a lot of drama at that get-together, which I was happy to avoid. I thought I’d dodged a bullet, until someone at school informed me that my absence had created its own drama. It gave people an opportunity to gossip about me. Normally, if someone was talking about me, I’d just shake it off. But this time, the topic of conversation involved my being gay.

I’d already dealt with disrespect from the same group. At school they were constantly huddled together, whispering and pointing, and they criticized people for who they were. I was done with being mistreated. I sat at my locker, venting my anger to my friends. We were all recounting times we felt violated by the same group, when one of my teachers happened to walk by and overheard what we were talking about. He said there was a teachers’ meeting downstairs, and that I should go and share what happened. I did.

In the days after I informed them of the gossip that had been spreading, my teachers were supportive. They reminded me that they were there to help—including a teacher who had always been pretty rude to me before. (On multiple occasions my friends and I had tried to bond with him by talking about our common interests, like TV shows, and he responded dismissively by telling us to leave his classroom.) The day after I told the teachers about the gossipers, he pulled me aside during class and said, “I want to let you know that I’m here if you need to talk. You should feel comfortable talking to me about your issues.” After finally seeing that he had an empathetic side, I slowly began to trust him.

Unfortunately, he wasn’t a guy who stuck to his word. Just days later, I tried to talk to him after class about an unpleasant run-in I’d had with the same bullies. I approached him, and before I could start my sentence, he sighed, rolled his eyes, said he “didn’t have time,” and walked away. I was hurt. He was all talk and no game. He’d said I could talk to him, but when I needed to talk he was dismissive. I felt like he’d abused my trust.

Because I have been dealing with rude teachers since the beginning of time, though, I had a great recipe for diplomacy. Hopefully, it can come in handy for you, too. All you’ll need is a sassy yet composed attitude, and these steps:

1. Plan out what you’ll say, then say it with conviction.

Familiarize yourself with some predetermined talking points. If you don’t, a bunch of incomprehensible words could just start flying out of your mouth. When I first attempted to confront my flakey teacher, I freaked out. Instead of telling him that his dismissiveness was hurtful, I was like “Ummmm, you went to NYU, right? Did you like it?” Don’t do that!!! Be direct, and it will feel so much better—and will more likely lead to the outcome you’re hoping for—than having a five-minute long conversation about your teacher’s alma mater that you didn’t even want to have. (Let’s face it: I didn’t really care how he felt about college.)

Here are some lines that have helped me open up a dialogue with a teacher: “I wanted to talk to you about what you said earlier…” or, “I wanted to let you know it made me really uncomfortable when…” Then share what’s on your mind. As you talk, make eye contact, speak clearly, and have good posture, despite any awkwardness. This will show you’re strong, which I know you are! Trust me, confronting a teacher might make you physically feel like a living blob of jello—that’s normal—but don’t let it show!

2. Be civil, but hold your ground.

Try to be civil. Even if you’re frustrated and want to say a lot of not-nice things. (It’s probably not a good idea to be like, “You’re a jerk, I’m out.” Although that would be pretty kickass.) If you’re bitter or abrasive, the teacher will most likely become really defensive—and that won’t help anyone. If you are diplomatic—direct, open, and tactful—then the conversation will be more comfortable for you and the teacher.

Even though you might not want to, it also helps to give the teacher the benefit of the doubt, because they might not have realized that they made you uncomfortable. Instead of criticizing or shaming the them for what happened, describe the issue at hand, and why their words or actions bothered you. When I calmly explained to my teacher how disappointed I felt about the way he’d treated me, he said he didn’t mean to make me uncomfortable and that he would work on being more respectful in the future. If everyone is civil, it’s more likely that the teacher will want to apologize or resolve the situation. (But civility shouldn’t mean being a doormat: Make it known that you don’t want whatever happened to happen again.)

If you sense that there’s potential harm or danger in talking to your teacher without having an adult with you (trust your gut on this—does this person creep you out or make you feel unsafe?) bring an adult. Or at least talk to a trusted adult first. But if the idea of talking to this teacher just makes you run-of-the-mill nervous, consider bringing a friend who has had similar experiences with the teacher as backup. With them by your side, you might feel less singled out if your teacher disrespects you again. Having someone there to support you can also help settle your emotions down.

I’ve brought a friend as backup before, and it really helps: Teachers have been more likely to accept that they did something wrong if it’s an issue several people are having. Even one other person can help make your arguments to your teacher stronger by validating or confirming your examples. If you demonstrate that an issue affects multiple people, you create more of a sense of urgency for it to be solved, and a teacher will be more inclined to do something about it.

4. Have a slightly icy glare at the ready.

Icy glares project the perfect amount of intimidation, enough to show that you don’t mess around, but not to the point where you scare your teacher. Squint your eyes a little, and purse your lips. (Refer to Tavi’s tips on how to bitchface.) Maybe if you’re really good at giving glares, you’ll be the hot topic of the teachers lounge, because we all know they talk about students in there. (Attention, teachers: We can see past the bagels and cinnamon sugar Munchkins, which I DEFINITELY HAVE NOT stolen when the door is open and no teachers are in there.)

5. Optional: Flaunt your glamorous self.

OK, so this is where sunglasses and a feather boa could come in handy. After all is said and done, pull the sunglasses and boa out of thin air and put them on. Then pause for effect. I’m talking a really long pause, like five minutes maybe. Just stand there and make awkward eye contact. Then, do a Regina George–esque hair flip and waltz out of there, because guess what? You told someone how you feel like the boss-ass independent that you are.

Overall, I was happy with my teacher’s response after I talked to him, and now things are going much better. You may find that the more you stand up to people who are supposed authority figures, the easier it gets to confront anyone, really. (This has been the case for me, at least.) Truth be told, some teachers just aren’t nice people, and no amount of talking can help that. But if there’s anything I have learned, and anything you can take away from this, it’s that being upfront about how you feel is always the right move. ♦