Why I kinda want to be the Nelson Mandela of my generation. 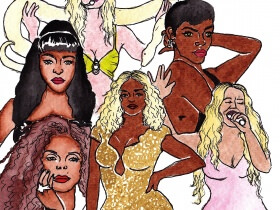 Friday Playlist: For the Fandoms

“Not another apartheid story, don’t you have any other stories to tell?” That was me at six years old every time my dad and his friends would talk about their younger, more vulnerable days growing up under South Africa’s oppressive apartheid regime.

Now that I’m 17, and more aware of the world and the South Africa I inhabit, I’m grateful for all of the boring, informal apartheid history lessons I heard during my formative years—stories of police brutality, songs of exiled compatriots, and tales of hunger strikes to protest imprisonment on Robben Island. I am one of the lucky few. Many South Africans’ only access to the past is via one great man who is monumentalized across the country. We remember him when we drive to work on Mandela Avenue, listen to traffic reports about Mandela Bridge, hear about Mandela Metropolitan University, think of our holidays in Mandela Bay (where we take pictures of Mandela statues and paintings, of course), or go shopping in Mandela Square, using banknotes printed with Mandela’s face.

In the dominant version of our national history, Nelson Rolihlahla Mandela is The One and Only. It’s not like our celebrating this massively significant person doesn’t make sense. He was South Africa’s first black president, and leader of the African National Congress (aka the ANC, our country’s governing party since 1994, when Mandela was elected). His activism, and his role in negotiations to end the rule of the National Party (the party that introduced apartheid in the first place), gives him a deserved edge up on the other anti-apartheid agitators of the time. But even Mount Rushmore has four faces on it.

It’s not that I want us to forget Mandela, or anything dramatic like that. I’m just bothered by our continued, unrelenting obsession with him and only him. In South Africa, it’s difficult to condemn this devout worship of a single man when even the ANC still use Mandela as their poster boy. At each and every national election, the ANC rolls out its supply of Nelson Mandela T-shirts and merch, regardless of the fact that Mandela hasn’t been president for over 18 years. It’s hard to know how young South Africans like me are supposed to learn about anti-apartheid activists like Robert Sobukwe, Govan Mbeki, and Walter Sisulu when the very party of which they were prominent members pretend their contributions do not exist.

There are many examples of Mandela-like icons in popular culture—Mohandas K. Gandhi, Martin Luther King Jr., and Mother Teresa—who are often described using phrases meant to celebrate their leadership and significance. But claiming that any individual was “an entire movement” forgets the movement, and reduces a complex set of events to the biography of one human. It‘s a form of historical erasure that dilutes and regards as irrelevant the contributions of many individuals in order to praise the contributions of one. Creating deities out of mortals also transforms their actions and beliefs—formed in a particular time and place—into edicts that we are all expected to subscribe to. In South Africa, “What Mandela would have wanted” is the South African equivalent of WWJD. Every day, our government tells the people it oppresses not to protest by using generic Mandela quotes taken significantly out of context. Using the name of Mandela, I have been told, “You are too radical, be more peaceful” when I protest the dress codes that discriminate against black hairstyles. Apparently by talking about racism, I am singlehandedly “destroying the harmony that Mandela worked so hard for.” Invoking Mandela’s name has become a way of shutting down discussion and dissent.

Not too long ago, I dared myself to actively seek out the lesser-known sides of these Great Men’s stories. I dug into the biographies that were not bestsellers, and traded biopics for investigative documentaries. I learned that Mandela was a formidable freedom fighter, and that his first wife Evelyn Mace alleged that he had been an abusive husband. Gandhi was a pacifist who held the view that whites and Indians were higher than black people on his imaginary scale of civilization. I also read accounts of his abuse of young women. There was no damnation for choosing not to be an uncritical follower of these Great Men. Knowing that these flawed humans were not “the whole movement,” made it clear how indebted they were to the masses of people they led.

As much as I try to rid myself of understanding history as a succession of Great Men/People, it’s still tempting to try to be the Nelson Mandela of my generation. I’ve been known to create archetypes in the story of my own life, and construct protagonists and antagonists in narratives about my own reality. My “woke” friends and I are guilty of calling Malcolm X and young Joseph Stalin “activist bae,” and wearing Che Guevara shirts as badges of honor. I—with my ambitions to create a more equal society—still find myself attracted to the political equivalent of seeing my name in lights. Even writing this I found myself thinking, Perhaps this essay will be the beginning of the Cairo Mathebula cult of personality??? The lure of being knighted “the XYZ of a generation” is especially strong when it feels like the only way to gain recognition. And until we find better ways of memorializing movements, and not just individuals, I think it will continue to tempt me. ♦