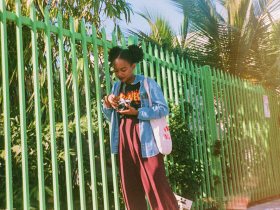 Empathy is a tricky one. A history of childhood abuse might never lead to any emotional complications in adult life, but the Cluster B spectrum contains more than its fair share of such tales. Not that an abusive past is necessary for developing a personality disorder, but according to The BPD Survival Guide, an emotionally unfulfilled childhood in combination with a single traumatic event is enough to create the trigger. However, once the trust issues come into their own, they can make it near impossible for someone to feel secure enough to empathize—empathy requires vulnerability and to be vulnerable is to leave yourself open for destruction. Sometimes cognitive empathy takes precedence over its expression, which means that you might recognize that a person is hurt but are unable to reach out to them in any meaningful manner. And sometimes you feel so very much for them, you feel their pain so deeply and terribly that you just don’t know what to do anymore and explode in an incoherent flood of panic. While the emotional turmoil and pain of BPD is my own, very private cross to bear, my difficulties in empathizing affect everyone else around, including people I love and never wished to hurt, and whose feelings then bounced around to affect mine in the form of shame and guilt. In the course of my twenties, I’ve gone from being deeply, emotionally empathic to barely and cognitively so. But the guilt never changes its shape, and it always comes back to prick me when I’m drowning in my thoughts, alone.

How do I express empathy in a way that’s understandable to others? How can I let other people know that I’m on their side, even if I can’t relate to that feeling very well in the heat of the moment? Objectivity has been my personal key in unlocking this buried aspect of my personality. It’s all too easy for me to lash out when I feel threatened, inflict the pain I intuitively know is coming my way, put up my defenses and launch an attack so I can protect myself even before they’ve had a chance to wreck any damage. Except, I also care about the people I lash out at because BPD also means caring, way too much sometimes and usually without reason. For me, the wisest course of action in any confrontation is to withdraw. Try stepping away, giving yourself enough time to calm down, and approaching the issue with objectivity once you’re in a better frame of mind. Even if you’re in a situation where you need the other person to do something for you, and you don’t really care about how they’re feeling, you’ll always get that task out of them far more easily by being rational and objective than through confrontation. Just take yourself out of there—physically if you need to—and focus on something entirely different for a while. If nothing else, you’ll feel a lot better when you don’t have blood rushing in your ears.

Maybe, like me, you don’t really get the point of empathy. What evolutionary function can an ability to take on someone else’s emotions possibly have, other than exposing your vulnerabilities for others to exploit? I’ve found it useful to think of empathy as a social lubricant—one of a category of acts that makes it easier to interact with others. An inability to mirror the emotions of others doesn’t make you a monster, because in the end your thoughts and feelings are yours alone. Your actions are what really matter since it’s through those actions that you communicate with the world. So even if you have to set yourself periodic reminders for small acts of empathy—like telling your classmate to not worry about a test, or asking your friend how their day has been—no one’s going to know your intent behind those gestures, they’ll only perceive your act of compassion and feel positively toward you. A neurotypical person might consider this manipulative, but then again they don’t get to judge your intent because your intent is not open for them to analyze. And if by using empathy you can interact with greater ease, I fail to see what’s quite so awful about that.

In the Greek myth of Narcissus, the young anti-hero is punished for his self obsession with self inflicted death. We live in a culture where narcissism and self-prioritizing behaviors are frowned upon, even as that same culture values the “self-made” person and places economic success at the pinnacle of all achievement. Damned if you look after yourself, and damned if you don’t. Navigating this system as someone with BPD and all its frowned-upon behavioral traits in tow, I’ve come to believe that a path of least harm and minimal collateral damage is the easiest one to a peaceful life. And after a past that been more turbulent than average, I place immense value in a placid existence with no more nasty surprises. Your priorities might well be different, which is to be expected: Every single person, neurotypical or not has to figure out what works best for them. No one’s better qualified to live out your life than you are, and all these tips—practising empathy, finding treatment, and holistically managing your disorder—are merely guidelines, not rules set in stone.

If I were to impress on just one thing, it would be to exercise caution while reading up about Personality Disorders online, especially if you’ve already been diagnosed with one. The kind of misinformation that’s out there is enough to send even the most stoic among us into a depressive spiral. There are quite a few Tumblrs out there, mainly focused on BPD, that engage in non-stigmatized conversations about Cluster B disorders. Shit Borderlines Do is one that I like, and Cluster B Clusterfuck while not updated as regularly, has more accurate information on NPD and ANPD than I’ve seen elsewhere. Healing NPD is a blog written by a woman with a BPD diagnosis. If you’re looking for reading material with a more clinical bent, Skills Training Manual For Treating Borderline Personality Disorder by Marsha Linehan is the celebrated text that first set out the guidelines for DBT. I’ve also been dipping into The Borderline Personality Disorder Survival Guide recently, and I highlu recommend it for its clarity and non-stigmatizing tone. And finally, if you’re facing difficulties that resonate closely with anything you’ve read on PDs or other disorders, it’s always helpful to see someone who’s qualified to tell you exactly what’s going on—a therapist, psychologist, psychiatrist, or social worker—before diagnosing yourself.

When I was 17 and marked with the stigma of BPD, I didn’t think there was any hope. I was convinced that I needed redemption, not therapy, penitence instead of medication. I’m 30 now, and I know that there’s something better than a cure, something more tangible than a miracle. It’s the promise of a full, content life, rich in love and boundless in variety. And I fulfil that promise every day that I live with help from my family, regular medication, and therapy when I can afford it. There’s always hope. And it’s worth the work that goes into making it possible. ♦