We recommend some of our favorite books, zines, and other reading material. 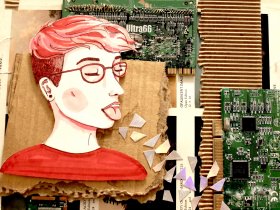 What Are Words For?

Welcome to In Print, a column dedicated to our favorite books, zines, chapbooks, story collections, and reading material, in any and all printed formats. For our first round of recommended titles, READ ON…

Koyama Press
Founded in 2007
Koyama Press is a small press based in Toronto that publishes comics, zines, and art books. Since its founding in 2007, Koyama Press has featured the work of 90 artists. I am impressed by the originality found in the press and the variety of work published—something that I don’t think would be possible with bigger publishers. Koyama Press seems to be founded on a need to foster creativity, whether the authors are newcomers or thoroughly experienced. Some artists on the roster include Patrick Kyle, whose work is fluid and alien, especially in Distance Mover, and Ginette LaPalme, whose book Confetti extends the category of adorable into many modes of expression, including clay sculptures, paintings, comics, and even lockets. No matter what medium, her works are day brightening and delightful. More subjects include The Infinite Wait and Other Stories by Julia Wertz, a collection of graphic novellas that describe her move through various jobs while maintaining a love of comics and a struggle with alcoholism, and Phil Woollam’s Crossways, which features a variety of asymmetrical line drawings as inspired by urban landscapes.

While I’ve always admired the myriad of work published by Koyama Press, I found their roster even more impressive upon reading that Annie Koyama, its founder, had no prior experience in publishing and worked as a film producer. Upon entering the field, Annie also tabled at comic festivals. This allowed her to meet different artists and eventually sign many of them. I think this method is what we have to owe Koyama Press’s broad range of work to. A number of authors have also worked with Koyama Press on their first books. This willingness to work with new artists is what gives Koyama Press its fresh, inspiring energy. I’m into it! —Rachel Davies

Hunger Makes Me a Modern Girl
Carrie Brownstein
2015, Riverhead Books
This memoir by Carrie Brownstein, the guitarist and co-founder of Sleater-Kinney and co-creator of Portlandia, was one of my absolute favorite books of last year. The majority of the book is about her time in Sleater-Kinney. As a fan of that band, I loved the way she broke down the chapters by each of their albums and reflected on the places in life that Brownstein and her bandmates were in at the time. This isn’t an overwrought and confessional Behind the Music-esque book full of drugs and drama. It’s the story of three women in a band that toured mainly in a van and dealt with the relationship friction and emotional toll that putting yourself out there as an artist causes—even if, like Brownstein, you grew up a born performer. It’s this realness that makes it a great book not just for Sleater-Kinney fans, but for any music lover, aspiring artist, or modern girl. Though she barely touches on Portlandia, her sense of humor and view of the world are clear all the way through. They make her a stronger person, and the best thing about this book was that when I finished reading, I felt capable of tapping into that strength, too. —Stephanie Kuehnert

Look at Me
Jennifer Egan
2001, Anchor Books
If you’ve ever moved to a new town or gone to a party where your only friend there was the guest of honor, then you know that the clean slate offered by anonymity can be both a blessing and a curse. In this book by Jennifer Egan (whose A Visit From the Goon Squad is also a must-read), a model named Charlotte must reacquaint herself with the world after a terrible car accident changes her face forever. Without the advantages that her recognizable looks once afforded her, she’s forced to assess the person she truly is inside—and what she finds isn’t exactly pretty. Meanwhile, another Charlotte—this one younger and less experienced—steps into her own identity crisis, as a new crush takes her far outside her comfort zone. As the two Charlottes’ stories intersect via unpredictable twists and turns (and some early aughts internet-related anxiety), the story becomes a psychological mindfreak that speaks to our desperate need to be noticed and understood. —Maura M. Lynch

The Hour of the Star (Second Edition)
Clarice Lispector
2011 (originally 1977), New Directions
As one of Brazil’s most beloved mid-century authors, Clarice Lispector redefined what it meant to be a female writer, not only in South America but in the literary scene at large. (Please check out this amazing interview with her from 1977, where she describes her teenage output as “Chaotic. Intense. Entirely outside the reality of life.”) The Hour of the Star, her final novel, is one I revisit most often, as she uses the form to wax philosophical on several themes—including underline-worthy passages on Brazilian politics, poverty, the writing process, personal identity, and (sadly) death. The star here is Macabéa, the book’s young, sickly, undesired protagonist who lives life in a passive daze, mostly in her head. Despite her unfortunate circumstances (which the narrator seems almost too poised to point out), Macabéa is happy: a revolutionary thought. —Maura M. Lynch

The Wrong Place
Brecht Evens
2010, Drawn & Quarterly
The Wrong Place captures the range of emotions brought on by a night out. The social scenes, like a backhanded compliment from a friend of a friend or the need to step out from the action due to an overwhelming feeling, are incredibly relatable at times. All of this is reflected in the wide range of color used by Evens; rather than seeming mishmash or conflicting, the colors display the differences in people and how easy it is to be isolated. The colors of each person clash with one another, emphasizing their uniqueness, and the white space in between only strengthens this effect. Evens’s watercolors can feel drowning at times, a page so full that it’s impossible to feel settled on one thing. This isn’t a weakness, though. It’s yet another way in which The Wrong Place accurately illustrates social situations. —Rachel Davies

Innocents and Others: A Novel
Dana Spiotta
2016, Scribner
At some point or another, we’ve all considered what it’d be like to live as someone else, (kind of like the time I walked around the mall speaking loudly in a British accent after watching Spice World). In Spiotta’s newest novel, Jelly is a woman who likes to trick others by using the original catfishing tool, the telephone. On her landline, Jelly inhabits a character that makes her feel more confident, attractive, and youthful—but when her prank calls become the subject of a documentary project, Jelly is forced to reckon with her actual identity. As a writer, Spiotta is interested in more than just Jelly’s story, though. Through Meadow, the filmmaker who becomes intrigued by Jelly’s story, she explores our desire to use art as a means of creating new identities for ourselves, for better or worse. —Maura M. Lynch

I Object
Edited by Quinn Moreland
2015, Self-published
I Object is a zine filled with female self-portraits inspired by the late artist Hannah Wilke. This zine introduced me to Hannah Wilke and for that I am forever grateful. It begins with an introduction by Quinn Moreland, which explains Wilke’s importance as a trailblazer for women representing themselves within their art. The introduction makes it clear that the proceeding portraits are not only beautiful, they’re essential and empowered. I Object features the work of 10 artists and although they are all self-portraits, there’s quite a variance in how each artist chooses to represent themselves. The portraits find even more power through their compilation—each artist’s individuality, both in art and personality, is made loud and clear. Suzy Exposito chooses to depict herself in black, pink, and orange, looking thoughtful surrounded by a dreamy group of birds, while Grace Miceli represents herself with drawings of a selection of objects. I adore the visual representations of what each artist holds as their truest form, their true self. If you need me, I’ll be counting the days until I Object: Volume Two is released. —Rachel Davies

The Girl in the Flammable Skirt
Aimee Bender
1998, Anchor
Aimee Bender’s stories are wondrously strange and magical—I’m confident they’re nothing you’ve ever read before. The surreal tales in The Girl in the Flammable Skirt, which all drip with some kind of emotional heaviness, have a way of provoking uncontrollable laughter from one sentence, to making your heart feel sponge-y in the next. For instance, in the haunting piece “The Rememberer,” a woman goes through a breakup by witnessing her former lover de-evolve from a human to a salamander. And Bender’s brain is like this in all of her stories. If you, too, want to explore both the darkest and most illuminating corners of your psyche, I highly recommend you do so through these stories. —Jinnie Lee ♦

Jinnie Lee is a writer based in NYC. She loves books, and co-runs the literary site STET.

Maura M. Lynch is a writer, editor, and musician living in NYC, where she co-runs STET. Find her on Tumblr.