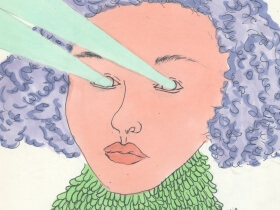 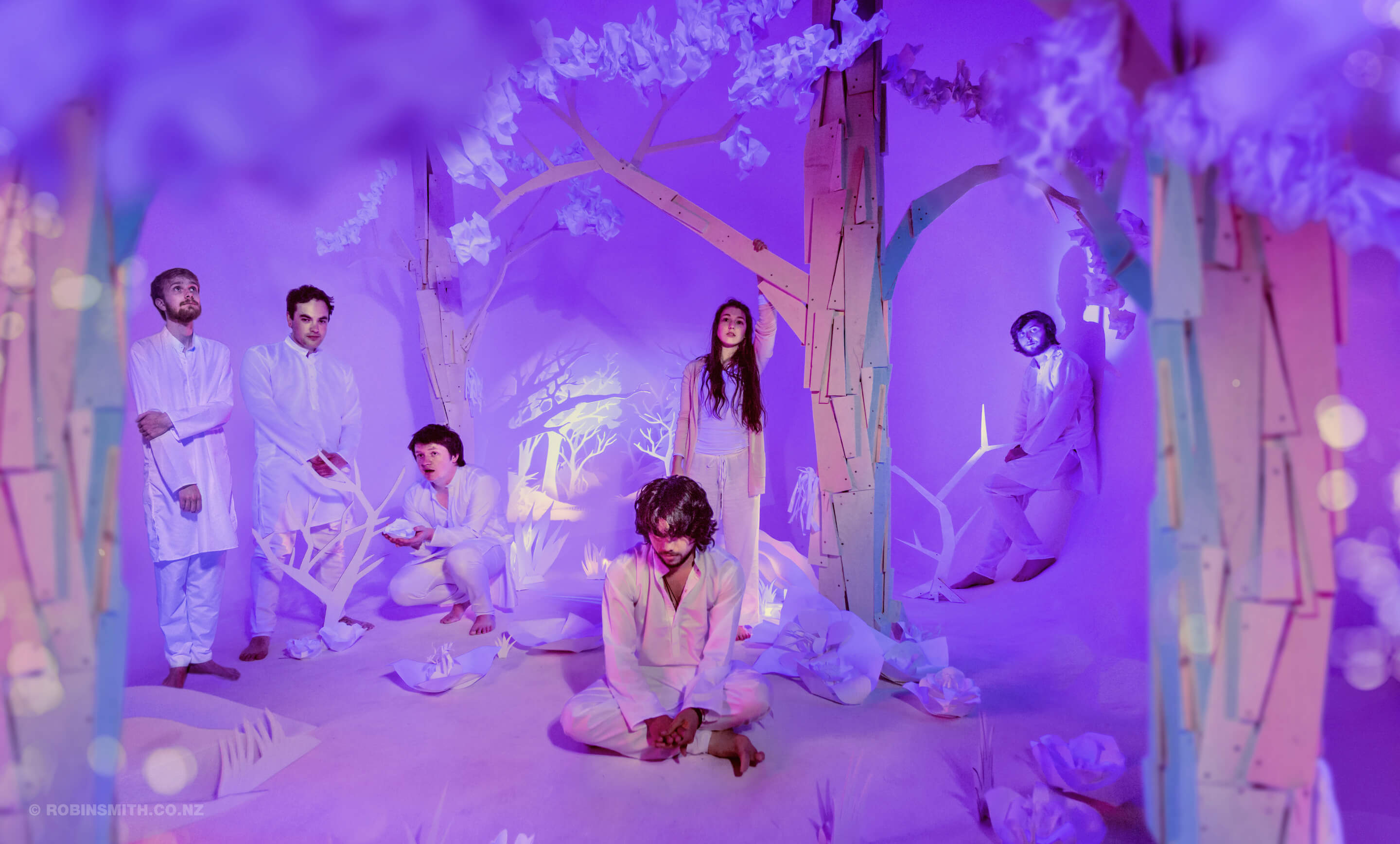 Doprah’s video for “Will I Be a Figure Eight” is a tribute to Victorian relationships with death, dying, and the supernatural, and we are pleased to premiere it in the here and now:

Earlier this week, I spoke with Indira Force, lead singer of the Christchurch, New Zealand–based band, about what the song means, her own relationship with death, and what she’s learned about herself as a person between “teendom and adulthood.”

ANNE T. DONAHUE: The video! It’s so dark! So Victorian! Especially the funeral parlor scene. What is it about the Victorian aesthetic and traditions that drew you in?

INDIRA FORCE: When we discussed the Victorian setting with [director] Julian Vares, he thought there was something very David Lynch about the black and white aesthetic, as well as the strange tension of the old pictures from that era. We found out about the old photos from the 1880s that look super creepy because of the long exposure requirement, but also because [people] had a strange interest in death; taking family portraits with relatives who were actually dead, or manipulating photos so that they looked like people were headless.

Where did you find the photos? Do they freak you out at all?

Maybe to the Victorian mind death must have just been another event to commemorate, like a wedding or a birthday? To us, there’s something inherently creepy about a lifeless body in a picture because we expect to see people living in photos, and a photo generally exists as a record of life. I wish I could say we found the photos in some dusty old attic along with a Ouija board, but mostly it was just the internet.

Strangely, the song is actually about seeking out more in life and doesn’t discuss death. I think death was a far less taboo topic in [the Victorian era] than it is now because it was happening a lot more and it was all around, so they actually accepted it far more easily than we seem to. Especially as I was developing awareness for these things, I was intensely afraid to die and have never been religious, so I felt deeply that I would just cease to exist and feel nothing, which scared me a lot.

Did you find peace with the idea of death, or does it still scare you?

I have this theory that it takes our whole lives to accept that we will die, so when we do die we’re finally at a point where it’s OK. So yeah, it still scares me a lot, but I think that’s because I enjoy living so much. Which isn’t a bad thing.

Truth! Did you have any ghost stories you kept in mind while filming the seance scene?

Well, the place where we were filming was pretty eerie! It was a super old convent that hadn’t been used in a long time. There was no electricity and no water and we were filming until 4 AM some nights, plus it was winter so it got down to -3 degrees Celsius. We could see our breath, even inside. The little rooms still had old bed frames and these quite macabre paintings on the walls. You couldn’t help but be spooked.

Your band description is “a sinister and evil cult.” As a group, you seem the total opposite of evil.

We are the total opposite of evil! It was actually a bit of a joke when we first wrote that in our description because it was a quote taken from a British documentary on dance and rave culture in 1988, and they portrayed it as this really dangerous thing. [Our name] felt appropriate because it was the perfect representation of how younger generations, with their new waves of music and trends in culture, are so often portrayed by the media and politics in this way. Music followings in particular can be referred to as “cults” because often, in liking a type of music or band, you’re connecting with it on a deeply emotional level, and also with what is being said, whether that is political or belief-based or whatever. It is an incredibly unifying experience.

When did you start pursuing music?

I sort of fell into it gradually. I always loved music, but never thought of it as a viable career choice. I had been playing piano since I was young, but I only really started pursuing it about four years ago, when I was 17. Music has this weird way of sneaking up on you [and] you don’t notice ’til it’s all around and it’s everything you think about.

Do you think adults still see teens in music as being threatening?

Ha! Well, I think the landscape of music has changed a lot, especially with social media—and if kids are in a band or playing music on YouTube or whatever, then it can be a source of pride in a lot of parents. My parents are all over it, to be honest. They are so supportive and quite hip and young so they totally get it. That said, there is also this underlying belief in parents and school teachers, which I think has impacted a lot of musicians I know that, “Sure, yeah, you’re talented, but what is your actual career choice? Because there’s no money in that option unless you get extremely lucky.”

In regards to the fear of newer, younger music—and it will always be emerging, no matter how disapproving anyone is—the music feels like an embodiment of the youth culture for its time. It’s something we own, something that’s entirely relevant to our experience of the current world. I suppose that’s probably hard to understand for people who don’t share that, and if you don’t understand it, then it becomes something to be feared.

I don’t think you’re alone in your fascination with the occult or with the darker side of spirituality. Why do you think we tend to immerse ourselves in learning about those things, especially when we’re teenagers?

I’m sort of in that weird place between teendom and adulthood now! But especially around 14 and 15, there was something that really scared me about the concept of dying, but at the same time, it had this dark glamour—it was this sort of mystery, something that no adult could answer for you. It’s this big thing, because most of the time it feels like everyone else is ignoring it, but when you are growing up and realizing loads of stuff about life and the world, you’re sort of in the thick of it. Awareness of time and of our ages also emerges, and it’s a strange combo of wanting to be more mature and older at the same time as wanting to revel in the sensationalized notion of youth—a term that pretty much refers to being as far away from death as possible. I also got really into witchcraft when I was about 12, and got loads of books out of the library on it. I think it’s that mystery aspect again, that ongoing curiosity of trying out everything that is unanswered to see for yourself. It feels like a type of secrets. And witches are totally badass.

What sparked your interest in witchcraft?

I was completely obsessed with Hermione Granger. It wasn’t unhealthy because it actually made me very studious at school, so I guess I have J.K. Rowling to thank for that. I also think witches were the first powerful women role models I was presented with as a young fantasy novel fanatic. I don’t think I was conscious of it at the time, but the fact that they don’t need anything but their magic and they exist as these rebels outside of their societal expectations makes them quite a feminist concept. There is totally a sense of sisterhood.

So how do you feel more self-aware now? Because that phase between being a teen and an adult seems like it could be really exciting.

Oh god. I’m trying to find a good analogy for it, but it’s really hard to explain. It’s like, I keep getting these strange epiphanies and going, “Of course! I get it now!” And then I need to write it down before I forget. It’s bizarre, like someone is very slowly unveiling an obscured object that has been right in front of me for years. But then I might just be completely wrong.

What have some of your favorite realizations been?

This is going to make me sound like a hippie [but] I realized that everything is intrinsically connected. Everything you do is influenced by everything else and you influence everything. And it’s OK that you are not this separate, singular entity. Sort of an ego-death. Also, that science does not mean magic does not exist, mostly that science and the natural world is magical in itself. Being creative with anything—like music—acts as this talisman that shields you from negativity. Not thinking is one of the hardest things to do, but one of the most beneficial things ever. [But] the best realization is that almost everything I think is altered by my own perspective, and is therefore quite possibly wrong. ♦