Don’t Let Me Be Lonely

You don’t have to stop loving someone in order to hurt them. 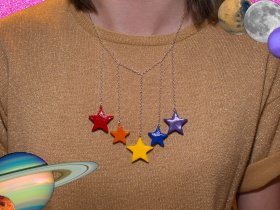 How to Make a Falling Star Necklace 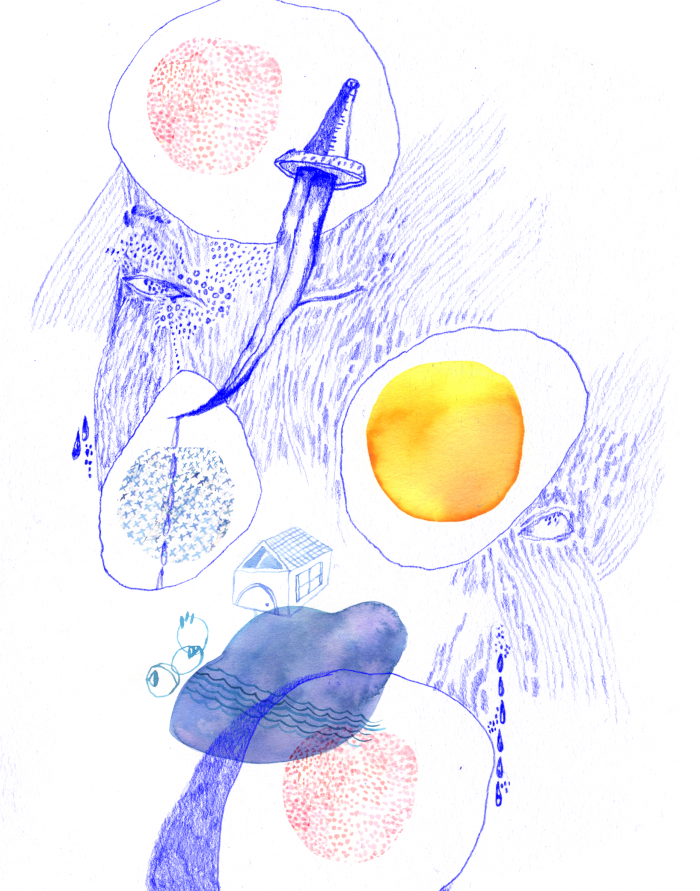 The temptation is to say that I didn’t really love him. The first night we slept together, I knew he had a crush on me and I felt mostly ambivalent about him. We dated because I loved being loved. The temptation is to hold on to this narrative, and then carry it like armor when I walk through the streets feeling undesirable by the fact of this hurt. This is what I would like to say when everyone asks me what happened: that there is no such thing as love, or at least that I know nothing about it. It was an accident, it was a blip, it was god it feels so good to be fucked, god it feels so good to be wanted. It wasn’t real, but then again, what is? If feelings are facts, like Yvonne Rainer claims, then I want nothing to do with them.

I wrote to him about ghosts, and my books. I said:

I think you’re right, about writing in order to forget. (This is also why I don’t like letting my books go, because I outsource parts of myself temporarily and store them in certain novels) I’m picturing a process of severing, chronicling, and then containing it all for later, or never, I don’t know. 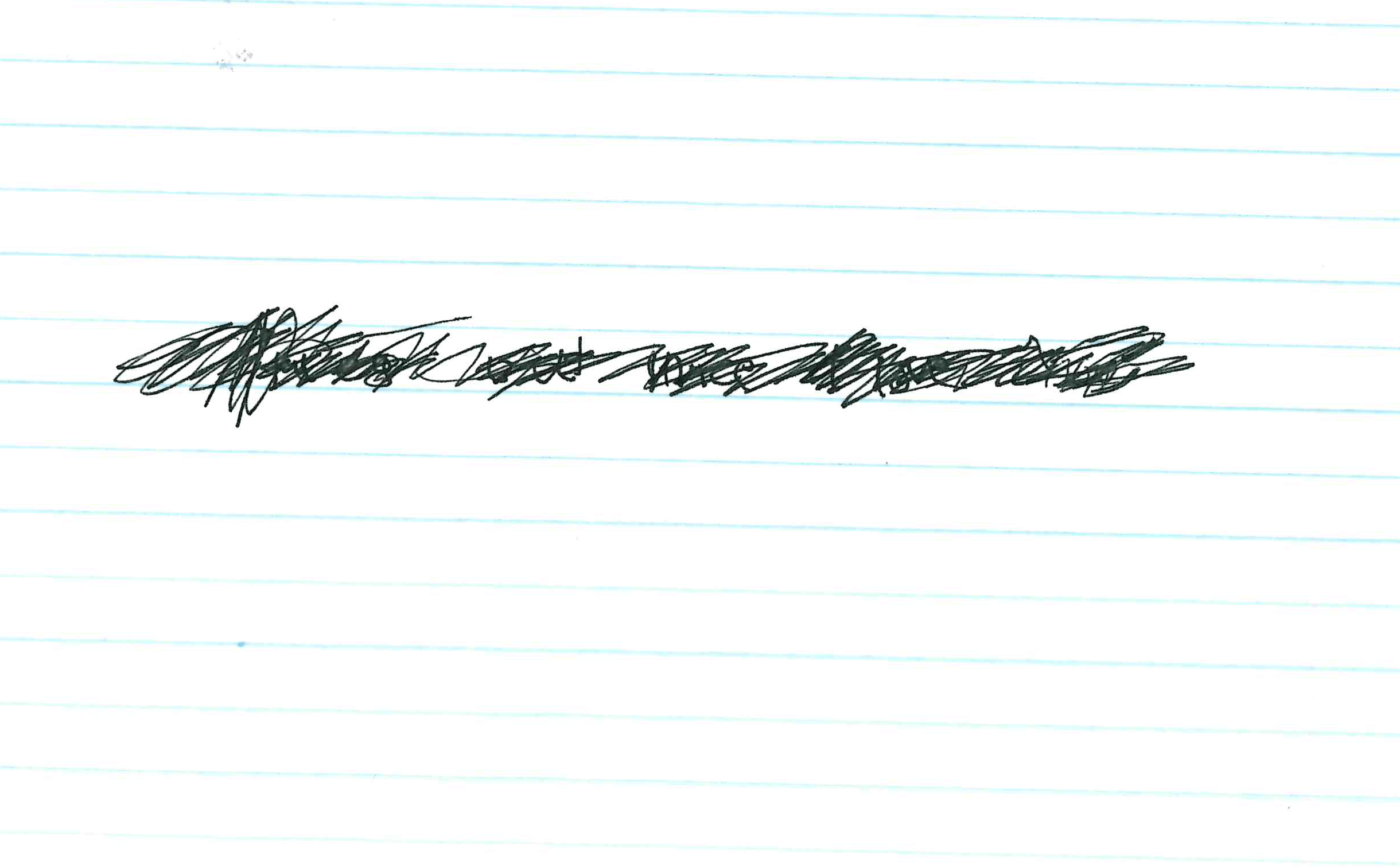 I asked for my books back but really I was asking for myself back; for the parts of me that were severed and chronicled in his bedroom. The parts of me temporarily stored outside myself, in other places:

pls, if you can, retrieve:

the book “yup, no definitely still hate myself.”

generally any books of mine that he has. it’s hard for me to remember offhand now, but you should show him this list and tell him he fucking owes me my books back because cheating manipulative liars who hurt people who love them don’t deserve books that were given out of places of trust and love.

Every piece of writing I made when I was with him, the endless letters I wrote while catching rides to different cities or the last bits of sunlight—I hate them all. The thousand affections and desperate attempts to say “I love you” in different ways; I labored over each sentence and tried to properly communicate how much I missed him, say the things that felt so new in a way that avoided cliché. This summer, on a plane ride from who knows where to who knows where, I organized every little document having to do with him and placed them in a folder in a folder in a folder where they had to be sought out, where they couldn’t immediately be seen. Lately I’ve been wandering through my city, wondering if the things we have no language for still exist. Finally I came to the conclusion that refusing to name something does not erase it, quite the opposite in fact, and maybe I killed loving him by how many times I repeated it, and maybe I nurtured being hurt by refusing it language like this, denying its mere existence.

Something inside me feels very warmed by being able to write you a letter after feeling so unsteady after having such an uneasy conversation. The family we find and curate for ourselves is just as powerful as the family we already have. I am thinking about the last text you wrote–it wasn’t meant to be sweet, just honest–and I am so, so warmed, bursting with it, and I need it so much in this moment and I feel so cocooned, knowing you whisper I love you when I am already asleep. I love you too. The phrase I love you has been tickling the end of my tongue each time we speak, and for weeks I’ve been trying to keep myself from blurting it out too soon. I love you in the way that I wake up hoping to see a message from you, just a reminder that you still exist. In the way that I have conversations with you in my head when I’m upset, that it’s only been three days since I last saw you, but it feels like three weeks or three eons, an unbearably long time until I get to see you again. I can’t wait to curl up into you, smell you and feel your body warmth pulsing near me. I want to whisper secrets all night and fall asleep feeling safe. 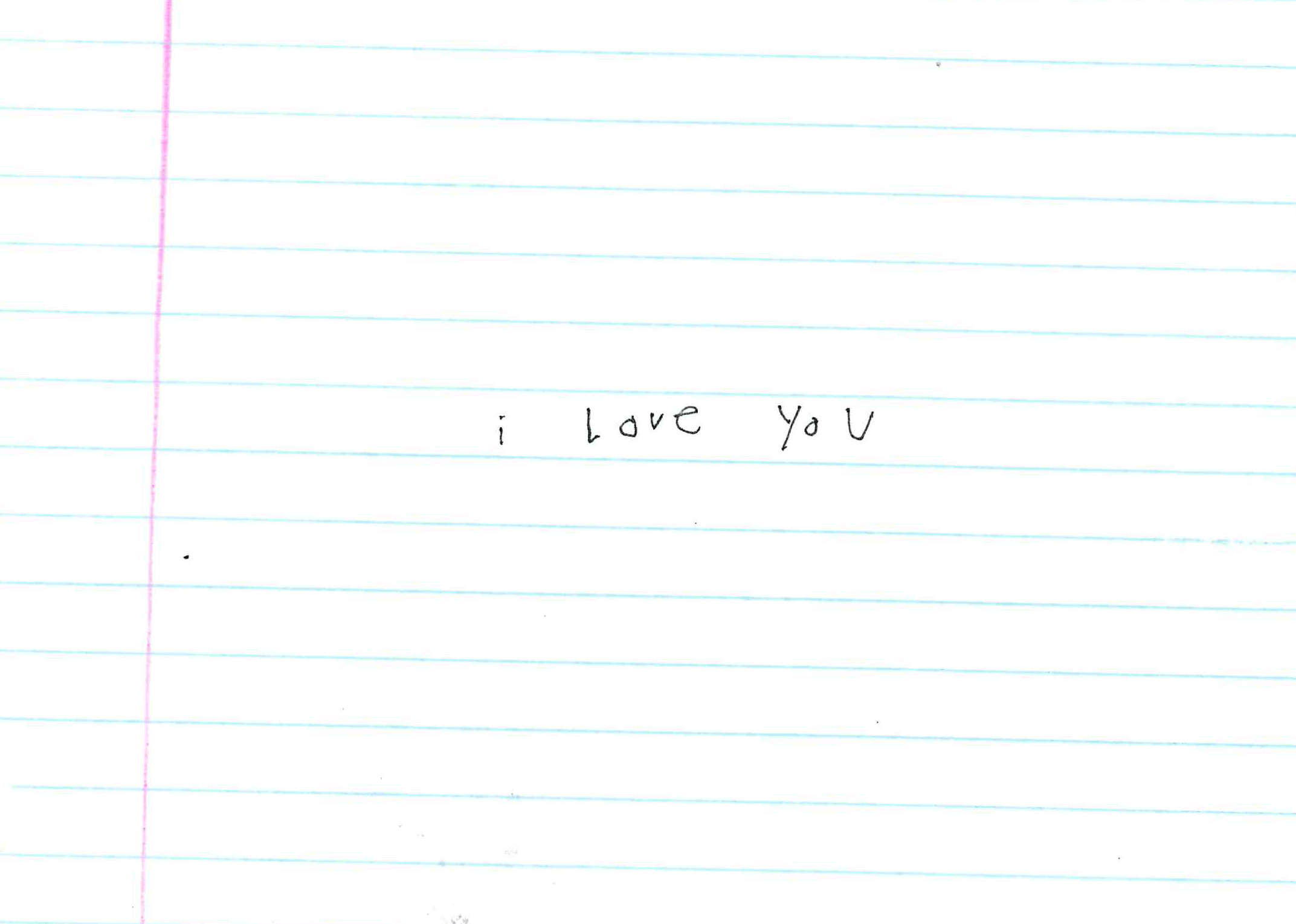 i remember a story i read a long time ago called “stab,” about a little girl who used to kill animals by cleanly cutting little holes in their hearts. perfect wounds carved into their unsuspecting bodies by a someone who knows exactly how to kill. i feel as though i was hurt so neatly, so cleanly, by someone who was so skilled & well-aware of their subject that there is barely any room to bleed. sometimes when we are hurt on such basic, concrete & bare levels, we realize why there are so many cliches about hearts. the body does heave under the pressure of betrayal, we can feel the aches of the hurt that process through the eyes & the ears & the brain.

Fuck, it’s so embarrassing to write this. It is so embarrassing to read everything I’ve written to him, about him; it’s embarrassing to admit that he once mattered and possibly still does and probably still will. God, I can’t help it, I’m just so fucking embarrassed to be alive. I can’t even count how many times I’ve accidentally told a sales clerk to “have a good day” when it’s already evening and I can’t think about flying without cringing, because I always say “you too” when the people in the airport tell me to have a safe flight. Once I let him matter, every moment we had begins to matter and everything becomes significant, the dates, the times, the loaded banality of it all. I am living long past him but he hasn’t stopped existing. He isn’t in my life anymore but he still lives past all the scenes I write him in and have written him in. 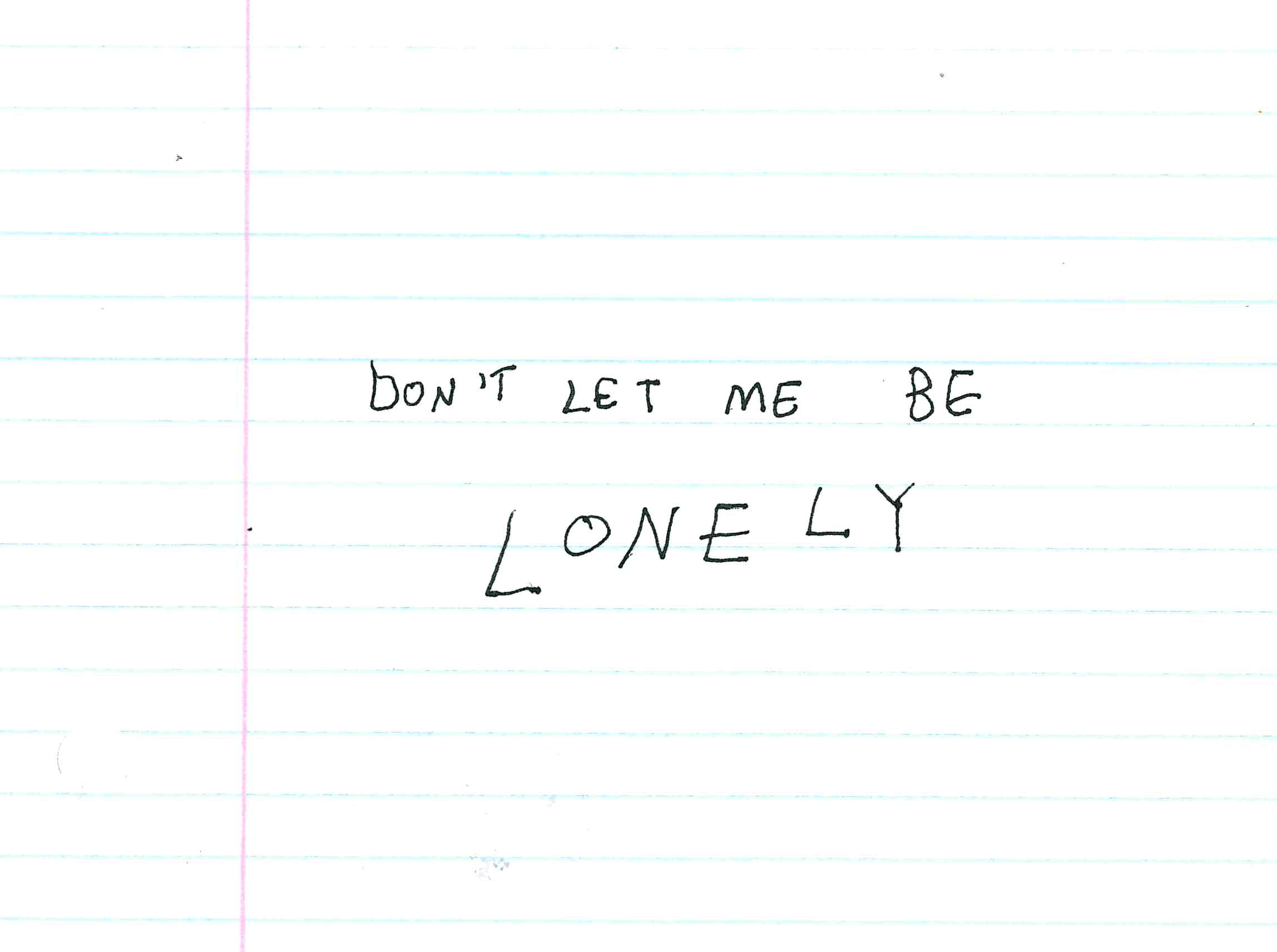 M. messaged me last night: I know this is silly, I can’t believe I’m still dealing with this, but what do you do when you want to contact your ex, she wrote. I didn’t really have a response. I don’t want to contact my ex, ever. I move too quickly.

He treated me so horribly, M. continues writing, but there’s still this part of me that loves him deeply and wants us to be together. I give her the advice I would never take: but who says love and time and friendship work so simply? Maybe love, like history, doesn’t move in a progressive, straight line. The time that you loved him exists as crystallized and stable as the time that you didn’t love him, they are both equally true and real, this mosaic of moments and times that all exist at once.

I can believe in the advice I would never take. Because I’ve never grown in layers, I always shed each year, the type of reptile that slithers out of old skins. Please don’t try and peel me back; I can dip to some other time and find the self that still exists, a preserved skin of the past that doesn’t stop as I move away from her. “I have already lost touch with a couple of people I used to be,” Joan Didion writes, but preserving isn’t the same as losing touch. Everyone keeps laughing when I talk about my great-grandfather living on in some place inside my chest. I guess, when I say that, I mean that time is circular and stable and perplexing, a bobbing mystery, wide and consistent. Every 50 years someone in this family will live on Clinton Street, and then we will all come to life each time. I don’t care if I believe that.

Here I wanted to write about how I don’t love him anymore, how I love someone new; how this whole piece is vestiges of a past I’m dredging up. But I can’t keep pretending that time and hurt are linear, and that love marches from person to person, never growing to accommodate or shrinking with fear. Some time ago, he sent me this piece by the artist Felix Gonzalez-Torres: 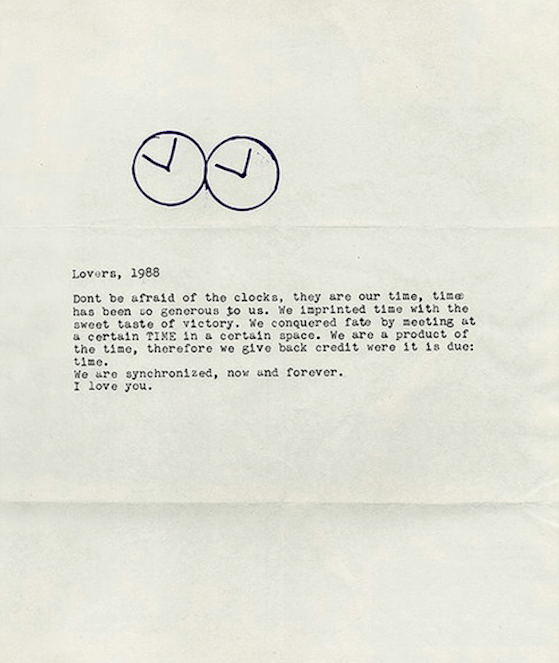 For his birthday, I collected all the letters we wrote to each other in a notebook and then pasted Gonzalez-Torres’s image of the aligned clocks on the front. He gave it back to me last summer, along with the rest of my books. It both relies on him and transcends him. But you don’t have to stop loving someone in order to hurt them. ♦