The artist talks about embracing the unknown and following creativity to new media. 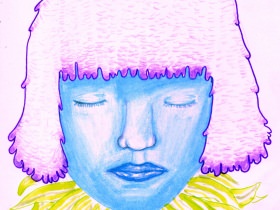 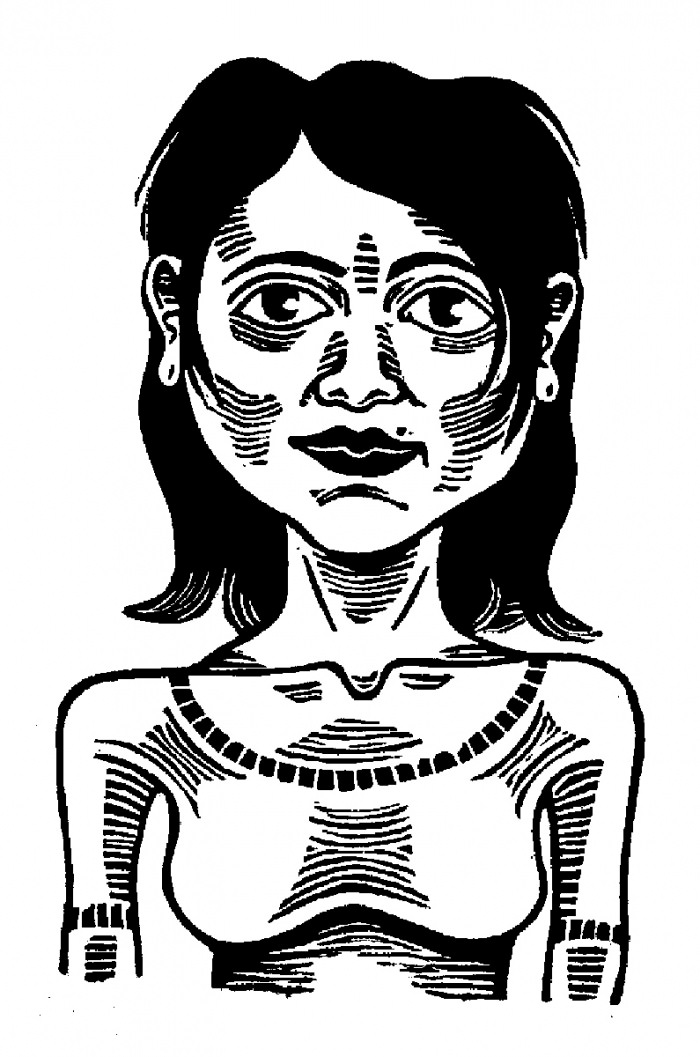 Julie Doucet is a prolific artist of various media who spent the ’90s creating an impressive amount of autobiographical comic books in both French and English. Now in her newest book, Carpet Sweeper Tales, her leading form is collage.

Doucet’s earlier comics work told the story of her life in different ways. Her work often contained depictions of her flawed relationships and female sexuality, but I particularly enjoy My Most Secret Desire, a book in which she recounts her many ridiculous dreams and nightmares. In her final comic book, The Madame Paul Affair, she shares the story of her experiences involving a landlord’s great aunt.

As her career progressed, collage work began to seep into the comics, like in 365 Days where some pages feature clippings glued down into her diary and in Lady Pep with drawings directly over newspaper pages.

Doucet’s recent work has become largely abstract. Carpet Sweeper Tales is comic-like, but rather than being made through lithographic prints or drawings, it is collaged from clippings from 1970s Italian photo novels. I recently talked to Doucet about her creative multiplicity, moving on from comics, and escaping boredom.

RACHEL DAVIES: What did you study in university? How has this formed your current processes?

Can you explain your current preference of collage over drawing?

I had a drawing mental block. I burned out at some point. I couldn’t draw after a while, so I ended up making mostly collages, a lot of word and text collages.

When you were younger did you collage or did you pick it up later?

Yeah, I did some collages. I loved it but for some reason didn’t pursue it. I guess it was because I started to draw comics and I didn’t have time to do anything else. I put it off.

Would you come up with the story as you went along or go out looking for bubbles with the proper tone?

No, not at all. I always keep the words from the last project. I pick words and start from there, it’s not like I have a plan or any idea of where I’m going. I really follow the lead of what I have in front of me.

How do you think working with autobiography so much in your earlier work affected your experience of life? Would you ever catch yourself excusing a bad experience as good for the comic?

Well, I always wrote my diaries even from teenagehood. I got inspired from that. When I started drawing comics I naturally used my own character to tell the story. It wasn’t intended to be autobiographical but it turned out that way. Eventually, I couldn’t stand myself anymore so I had to try something else.

You’ve lived in Montreal for the majority of your life, to my understanding. Do you think anything about Montreal in particular is good for creating?

If you mean inspiration, not really. I did live in New York, Seattle, and Berlin. I don’t get inspired by places, it’s mostly about the people that surround me. What’s great about Montreal is that it’s cheap so I can afford to have a studio.

In your book 365 Days you show a shared studio. How does surrounding yourself with other creative people help or affect your work?

It helps quite a lot. [The people I was sharing a studio with] were working in printmaking mostly, too. Not necessarily the same type of visuals, though.

I noticed that you sometimes work with lithographic printing. I’m so impressed by the diligence of this. Can you describe your relation to the medium?

Well, like I said I just couldn’t draw anymore. I had this idea of making a book of poetry with cutout words but it wasn’t a good idea to just do that so I had to add pictures. [Laughs]

What is your favorite type of source material to cut from for your collages?

Mostly old magazines, like Good Housekeeping or Better Homes and Gardens. Magazines from the ’50s and ’60s are great material because at this time they used quite a lot of different fonts. It makes beautiful collages. Also the vocabulary is funky so you can create really amazing stuff out of them.

Do you prefer to work in French or English?

Both are interesting. French is more difficult because I’m very self-conscious of every word I put in. English is a different relationship, it’s more fun because of the freedom you get out of it. Of course I’m critical about what I’m doing with the language but it’s not quite the same thing.

You said you did printmaking in college but did you ever experiment with printmaking when you were younger than that? What did you work in as a teenager?

Oh, I was drawing with a felt-tip pen all the time.

Did you always see art as something you would do professionally?

I guess so, yeah. At the time, there was a crisis in the ’80s so there were no jobs for anybody. You could go to school and be an artist and it wouldn’t make it any difference because you wouldn’t have a job anyway. Being an artist sounded like the right thing to do because I was drawing all the time and I had a talent for it.

You said that you always wrote diaries and this easily transferred into your comic work. Do you still, now that you’re long done with comics, keep a diary?

No, it’s been years. I kept on writing a diary until maybe about four years ago. It’s not like I stopped writing comics and stopped doing the diaries, it’s two different things. Different timing.

Do you miss doing comics?

I’m much happier doing all sorts of different things. When I quit comics 15 years ago, the comic world was always panels on the page. Now it’s complete freedom, you can do anything on the page. If it had been that 15 years ago, maybe I’d still be doing comics. Maybe I’ll eventually go back [and do a comic without panels]. I don’t know, I have no idea. I just went back to drawing actually, but I have no idea where I’m going. I’m just experimenting for now.

I read that you’re working in animation film now. Can you tell me a bit about this?

I was, yeah. I did a series of very short films, about one-minute films. It’s abstract mostly, or using words. A friend of mine was doing the soundtracks. I always work with words and pictures in many, many ways.

Most of your visual art incorporates words, do you ever write just prose?

I always try and just write but it doesn’t work out; I can’t do it. I guess writing with [magazine] cutouts is, in a way, visual.

Are there artists that are doing collage work right now that you’re inspired by?

I’m just doing my own thing, I try not to look at what other people are doing because I get too impressed and can’t work anymore.

I know that a lot of young artists, or at least some of my friends and I, worry that as we hone a certain artistic skill, our work becomes too repetitive or stale. How do you suggest combating this feeling of boredom while still honing your skill?

You just get bored so you have to try different things. There’s no big secret. It’s not that I feel like I’ve done everything in comics, it’s not true. There’s always space for something else. You have to force yourself to go out into the unknown. Just don’t get bored. ♦