The band’s new video is an antidote to the blahs. 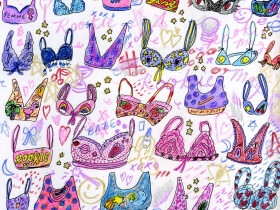 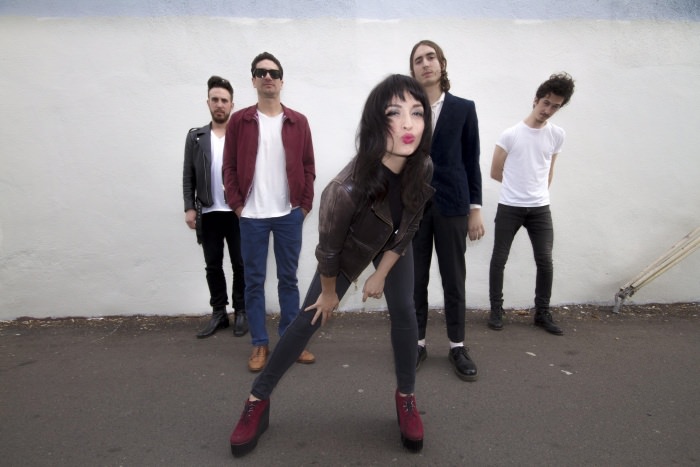 The video for “123” by the L.A.-based garage-rock band Pom Poms is an antidote to the blahs—winter or otherwise. The band dons Halloween masks and dances around (totally improvising), all under the filter of a ’90s-era VHS cam. I talked to singer Marlene Gold about these hijinks, as well as her work with SingFit, a music therapy program for people with dementia, and the connection between music, herself, and her late father.

ANNE T. DONAHUE: Marlene, hi! Your video is the jam. Why did you opt for the VHS effect? Is nostalgia something you tend to embrace?

MARLENE GOLD: Rad! Thanks. I love this video and had so much fun shooting it. I used to make homemade music videos with my family growing up. We would take my dad’s camcorder, shoot in random public places, wear masks, and throw donuts, then I’d spend the rest of the week cutting it together. This is a nod to those DIY videos. I guess in a way, it’s embracing my own personal nostalgia.

There’s also a ton of garage-rock influence, too, in terms of the song, the imagery, and your personal style. Why is this genre important to you? What do you like best about it?

I’ve always gravitated toward creating lots with very little. I love the idea of getting a thrift store amp and a shitty mic and writing weird songs. Garage rock is for those who really just wanna make some noise and not wait around for anyone. I live for that feeling. This also ties in with what I brought up about the video: We found a club downtown, bought a few masks, and improvised. We went into it with what we had, making a video that we love. I love that way of creating because sometimes the project takes a turn you didn’t expect.

How old were you when you began writing and performing? When did you know this was something you’d be able to do as a career?

I started performing in cafes and blues clubs when I was 15. I never really thought of it as a career at the time. It was just a fun hobby. Throughout high school, I played a few times a week and made two records. I wanted to pursue acting at Cal Arts, but then made a snap decision to go to Berklee College of Music in Boston. After a year or so in Boston, I came back to L.A. with the intention of making music my life.

How has your aesthetic changed as you’ve evolved as a musician? How have you changed?

I used to just compile all my written songs into a set and perform them as is. Now I like to create an atmosphere with my live show. From the flow of the set, to my own delivery and clothing, I want to create a scene for the audience to experience.

Cool! I’d also like to talk to you about your work with the SingFit app, which, as you know, uses music to assist patients with dementia. How and when did you get involved with it?

I met Andy Tubman [of SingFit] at a show where the both of us were performing, and he had asked if I’d be interested in singing a few guide tracks for the app. He explained to me that the app works as a tool for music therapy, and I didn’t hesitate to get on board.

What’s been the most interesting lesson you’ve learned from your time working with seniors? What’s surprised you the most?

When I work for SingFit, I only record the guide vocals for them to sing along to. I then record a speaking track that prompts the lyrics for whomever is singing the song. I do a lot of Doris Day and Peggy Lee songs, which I love. I don’t work directly with the seniors who use the app, but I’ve worked long enough for SingFit to see that this app has been highly beneficial to those who use it. I’m very happy to be a part of something like that.

Why do you think music is so powerful? What’s a memory you equate with a particular song or type of music?

I know music is powerful and healing. It’s saved my life more than once. I was lucky enough to make music with my dad in a band for six years before he passed. He’s the one who really taught me most of what I know today. He was a sensitive and emotional man. There’s this one song he wrote called “Far Away.” He wrote it for me to sing. It’s a song about someone who has either passed or is out of touch. When he sang it to me he teared up, and it was incredibly moving. We played [the song] at his funeral, and it couldn’t have been more moving—knowing that even though he isn’t here on this earth, he left behind some beautiful songs that bring me closer to him. ♦