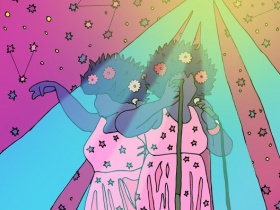 Justin Bieber’s career is, in some ways, the story of a morphing of a persona. Before 2009, Justin was a 12-year-old with YouTube videos of himself singing at church. Since then, he has risen and fallen and risen. When a famous person alters their media persona it’s often seen as a ploy on their part, an attempt to “stay relevant.” But perhaps the changes in Justin were inevitable—he was growing up. That’s not to say that he hasn’t used his antics as a way of remaining in the public eye, just that he has gone from having control of his image through self-publishing on YouTube, to having the way he is understood shaped by a near-constant stream of paparazzi photos.

Although he sometimes does things I cannot support, I am a Justin Bieber fan and have been since 2009. Over the years, I’ve been consistently fascinated by how radically the internet has changed his life: Much of the power he has now can be traced to his foundations as a YouTube star. Still, I would be lying if I said that I am solely interested in him because of his internet-induced rise: I have always felt compelled to be the most responsible and serious version of myself. In Justin Bieber I see someone who is just a few years older than me and incredibly successful, even though he hasn’t always committed to the same principles I have.

Justin Bieber is powerful, and bratty at times, too. But mostly, he just seems overwhelmingly…normal. Take for example the beginning of this video of an acoustic session with Skrillex when Justin bumps into Skrillex on his hoverboard. In another video, he describes his high production music video as “really artsy, like actually artsy.” It’s not that Justin is by any means “down to earth” (I mean, his New York Times “Where R U Now” behind the scenes video was pretty self-aggrandizing), but somehow he isn’t intimidating, either.

“One Time,” which Justin released in 2009, was his first professionally recorded single. In this music video, an innocent Justin Bieber plays video games and is nervous to put his arms around a girl. Prior to this release, the videos on his YouTube page—where he posted videos under the name kidrauhl—had already garnered millions of views. The following year, Justin released My World 2.0, an album filled with naïve ballads about unrequited crushes (“That Should Be Me”), first love (“Baby”), and mutual happiness (“U Smile”). Listening to these songs in the eighth grade made me feel understood. Yes, I was a bit embarrassed to like the same mainstream music as the people I didn’t get along with at school, but I couldn’t deny relating to these songs or to Justin Bieber’s sweet voice. It was in these songs that I heard my newfound emotions reflected.

Justin Bieber hit puberty, and could no longer hit the high notes he once had. This fact, in conjunction with his relationship with Selena Gomez and his new, less boyish haircut, signaled Justin maturing. This was also the year that the movie Justin Bieber: Never Say Never was released. I saw the movie reluctantly, but I left the theater with a new appreciation for Justin—despite the fact that he did seem like a bit of a brat at times! The movie portrayed the singer as a small-town boy who had always had a talent for music. Its focus on his childhood dedication to music, and its overarching moral of working hard for your dreams really inspired me. I understood that a lot of work had gone into cultivating his musical talent, that his voice wasn’t just edited at a studio.

Justin released his third album, Believe, which features songs a bit more mature in content than on previous albums (“Maria,” is about his being accused of fathering a fan’s child). This was also the year that Justin was accused of reckless driving in his neighborhood, the beginning of a slew of run-ins with law enforcement. Before the release of this album, Justin was interviewed by Complex, and there were hints that the singer was growing out of his more innocent phase. Scooter Braun, Justin’s manager, explains that Justin “called [him] and said ‘Do you know why I’m never going to do [drugs]? Because I know you’d walk in and beat the shit out of me.’” The profile also notes that Justin plays the video game Temple Run and asked for an extra bowl of broccoli during the interview—two observations that raised several questions for me: What is his high score? Does he makes in-app purchases? Did he dislike broccoli at first and then end up enjoying it, does he eat it for his health, or does he just enjoy the taste?

Every Monday for 10 weeks, Justin Bieber released a song, leading up to the premiere of his second movie. My favorite pre-Journals song, “Confident,” is on this album and I’m always worried that people forget about it—it’s SO GOOD. I remember going to see Justin’s first movie in theaters and everyone at school talking about it, but few people I’ve talked to recently even know that Justin had a second movie. These songs were eventually compiled as the album Journals. These tracks are more knowing, and distant from the childlike depiction of love on his earlier albums. The tabloid coverage of the Bieber/Gomez break up makes it easy to guess who these heartbreak odes are directed toward. The songs themselves are all about emotional dependency, on “All That Matters” he sings, “Take the gas out your car it won’t drive / That’s how I feel when you’re not by my side.”