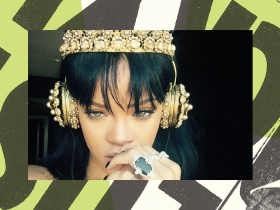 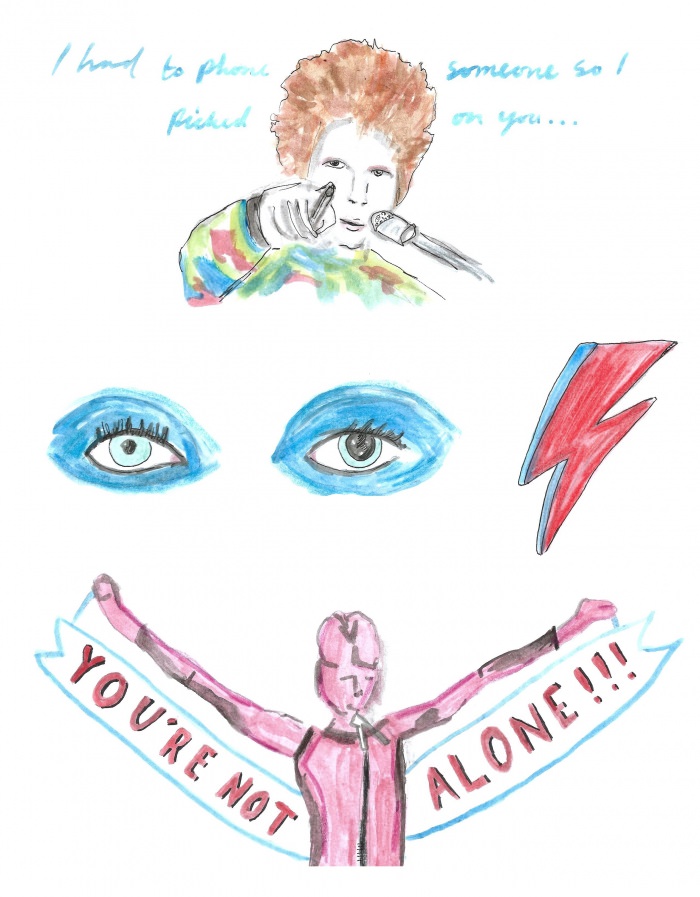 Upsettingly perky infomercial voice: Are you ever lonely? Do you suffer from the human condition? When you’re told to just “be yourself,” are you ever like, But that’s the problem? That I am already me, and will be, no matter what, and that this remains true even when I am far away from whatever place I call home? When such a sensation strikes your clammy bod, does it make you want to hit “fast-forward” on the excruciatingly slow bloating and subsequent rotting away of your strange, dull life?

That such a space oddity as David Bowie could have offered a sense of belonging to so many people speaks to how common this alien feeling really is. But aside from the outcast spirit found in his art direction, style, and literal references to outer space, he made me more OK with the secret stupidity of simply being alive—never mind being weird or different—by finding ways to transcend his own mortal limits. Maybe this is why his death has been so difficult to comprehend, as though it were only time for another reincarnation.

In December’s theme, we discussed how “Be Yourself” can feel confining if it means constantly measuring your impulses against an unchanging idea of who you are. “There’s no definitive David Bowie,” he once said, and it’s never important as a listener or viewer whether he was being himself or not: only that this person is doing this thing, here, now. A world of possibilities opens up when you don’t concern yourself with familiar markers of authenticity, but embrace the fact that we’re never not a simulacrum. Shift your attention from that sliding scale of what seems “organic” to the many spectrums we dash across when we dress up, put on, and fake it. They overlap and intersect, and colors we once recognized mix to form new ones. Our palette becomes holographic, infinite; a wonderful place to start from in your next transition, transmission.

February’s theme is “On Display,” and it’s about all the ways that changes on your outsides can propel changes on the inside. Concern with appearance is often dismissed as frivolous, but Bowie knew more than anyone that self-actualization is psychosomatic: he cultivated the sound and vision of Starman, a rock ’n’ roll star, Ziggy Stardust, Aladdin Sane, the Thin White Duke, and then he became them. His live performances show the kind of abandon that can only take place on a stage otherwise controlled. We already spend so much time in our heads, in memories, expectations, and fictions. What if carving out a literal space to engage with the demands of these hyperrealities—through dress, or performance, or an online identity—is what can allow you to welcome spontaneity? Being aware of what you are presenting to people—to the point of confidence and comfort, not insecurity—can be what allows you to forget what you look like. Like leaving the Garden of Eden and re-entering through the back.

For Bowie, this was all after a couple false starts at being himself in the form of two self-titled albums. He sang of local legends and crumbling ideologies before becoming his own cast of characters. In a 2002 interview, Bowie described Ziggy as a response to the posturing he noticed in so many rock stars striving to appear authentic: Their effortless-looking denim was not, in fact, any less performative than his own makeup and sequins. As Durga Chew-Bose wrote, a candid photo is a con. But for all his irreverence, sense of irony, and postmodern commentary, a lyric like, “Oh no love, you’re not alone…I’ve had my share, I’ll help you with the pain,” is still overwhelmingly comforting. Ziggy goes from a spectacle to a friend.

Bowie lifted from everywhere and everyone, citing influences like Little Richard, Kraftwerk, Jean Genet, Lou Reed, Kabuki theater, Charles Baudelaire, Elvis Presley, and Edith Piaf. His album Hunky Dory includes tributes to Bob Dylan and Andy Warhol, and when Bowie went to New York City in 1971, he visited the Factory to serenade Warhol himself. When asked in 1976 if he thought of himself as an “original thinker,” he replied, instead, “a tasteful thief.” From that same interview: “The point is to grow into the person you grow into. I haven’t a clue where I’m gonna be in a year. A raving nut, a flower child or a dictator, some kind of reverend–I don’t know. That’s what keeps me from getting bored.” Why not be your own source of entertainment, your own rock idol, your own mad genius film director? He thought of his albums as films, and his identity as a performer closer to that of an actor than of a rock star. Acting isn’t a one-way exchange: To deliver a “real” performance, you have to sustain your own disbelief and take what’s in front of you, in all its orchestration, as primed for a genuine human connection to take place. Have you seen the “Life on Mars” video? No one has ever believed in anything more than David Bowie believes, when he first sings to camera, smirking with his awful teeth and aquamarine eye makeup, that he’s about to change the world and watch it eat his stardust.

Across Bowie’s 25 albums are lessons in engaging your every multitude to the umpteenth degree and feeling no obligation to hang out in them for too long. Sometimes all the self-actualizing gets exhausting: “But the film is a saddening bore / Cause I wrote it 10 times or more.” At which point: “Sometimes I feel / That I need to move on / So I pack a bag / And move on / Move on.” It’s not entirely about annihilation, though—taking to the fire to burn all that you are, so that you may rise up out of the clouds. His career was not a straight sequence of retirements and rebirths. Bowie made references in later albums to early personas like Major Tom, demonstrating Joan Didion’s assertion in her own meditation of self-documenting that “we are well advised to keep on nodding terms with the people we used to be.” In “Song for Bob Dylan,” Bowie sang about a girl returning to Dylan’s songbook to “send her home again,” and it seems Bowie wrote for himself a songbook that would do the same. In the documentary Cracked Actor, he writes out, cuts up, and rearranges lines from his older songs, “to see if the past will predict the future.” In 1990, Bowie told Musician, “You have to understand why you went through [these phases]. That’s the major thing. You cannot just ignore them or put them out of your mind or pretend they didn’t happen or just say, ‘Oh, I was different then.’”

This web-like timeline, circling back on itself and exercising time travel in both directions, is characteristic of the work of all my favorite artists. Like the moment in I’m Not There when all six Bob Dylans, in all their individual time periods and geographical locations, catch the same gust of wind. Or on Joanna Newsom’s most recent album, which ends on the word “trans-,” and begins with the word “send,” and suggests somewhere in the middle: “Our lives come easy / And our lives come hard / And we carry them like a pack of cards / Some we don’t use, but we don’t discard / But keep for a rainy day.”

I am not trying to pull some annoying, stoner “time is a circle” shit on you. My fascination spins out from the rapid changes that have taken place in my life, the frequent shifting of gears, and the dysphoria of stumbling upon the site of a past catharsis and seeing it’s just a room, a street corner; the physical world, after all. It’s then that I know that the only way it could feel this anticlimactic now is if it did indeed happen to another person, in another life. “We create so many circles on this straight line we’re told we’re traveling,” Bowie said in a 2002 interview about his album Heathen. “The truth is of course is that there is no journey. We are arriving and departing all at the same time.” Along the way, so many punctums: a transformative article of clothing, new style of handwriting, poster on your wall, favorite song. They’re not mere obsessions, and it’s never “just a phase.”

Most recently, in the album released on his 69th birthday and two days before his death, David Bowie became a Blackstar. The term was coined in a 2013 Scientific American article as a theoretical alternative to the density of a black hole. Instead of a never-ending nothingness, a quantum effect produces a Bowie. We earthlings continue to find traces of ourselves in his infinite everything.

This month, we want to see your reflections on…reflections, mirrors, photos, appearances, your image, the looks of things. We want to celebrate how good it feels to take a selfie that you’re happy with because it looks like you, and to wear an outfit that feels completely unlike you, and lots more to be found on our Submit page.