The artist and zine maker talks about old toys, odd shapes, and other things that inspire her. 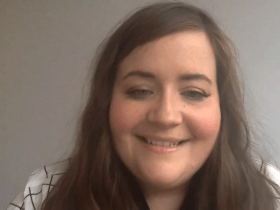 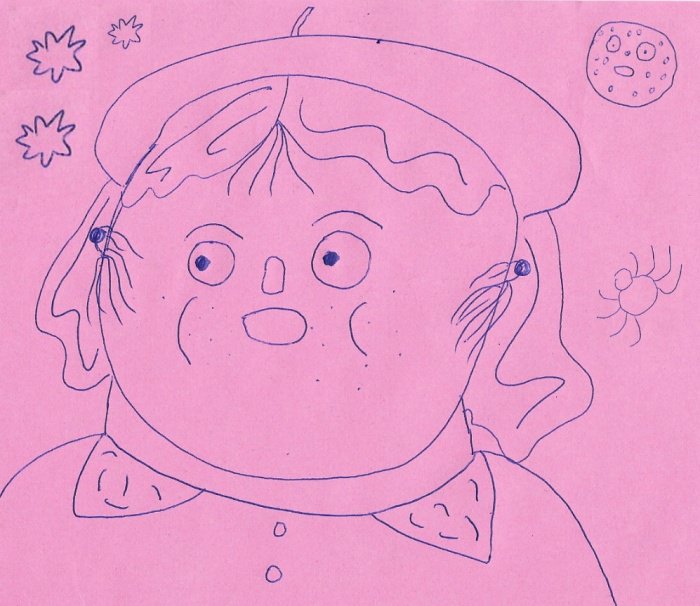 This month’s Bad Girl Painter, Kat Rose, is brimming with enthusiasm, energy, and playfulness. Her drawings are jumpy and naive renderings of rounded, squishy creatures that exist without gender or circumstance. Within her elaborate imaginings, she emphasizes immediacy and fun, and uses materials that are readily available to her from a local dollar store. I corresponded with Kat about the origins of her work, her many inspirations, and the evolution of her style.

MINNA GILLIGAN: Hi, Kat! How old are you, my child? And where are you currently based?

KAT ROSE: Hello! I am 20 years old, and I am based in the South of England, in my hometown.

Is drawing a full-time vocation for you? As in, are you studying art or something similar? Or do you see it as more of a hobby that embellishes what you spend most of your time doing?

I am in my first year of a Bachelor of Arts degree in illustration at Solent University. Drawing is a full-time vocation for me.

The characters you draw are full of energy—they’re playful, rounded, comical, and childlike. Have you always been drawing these little creatures, and who or what are they?

I’ve always been really drawn—haha!—to drawing people and characters, although I didn’t start drawing the characters that appear in my most recent work, which is a lot freer, until last year. For ages, I was very uncomfortable with my style so I would try and be as “neat” and as “realistic” as possible, so it’s nice—so nice!—when people say stuff like this because it just makes me want to draw even more.

In terms of who and what my characters are…I don’t necessarily assign gender to my characters and creatures. I like to let the audience decide for themselves. I do try and make each character individual, but I will draw the same character with many alter egos. Sometimes I don’t notice and realize the individual character later on. I like to think that they’re my imaginary friends come to life on paper! But it’s just what comes pouring out, I guess.

What materials do you use to make your work? It seems to me that you enjoy markers, ballpoint pens—very immediate things. Do you prefer to use whatever’s on hand, or something particular?

Yes, I love markers! I use Sharpies a lot, as it’s so much easier and cheaper to buy them in bulk! I also use felt tips a lot. My mum works with children, so there are always some Berols laying around. But I find the best ones are the cheap-y ones I find in Pound Land and supermarkets! I also love using 0.02 point fineliners. I mostly use Faber-Castell, but UniPin one’s are pretty good, too. And Bic Biros. I love how easy and immediate Biros are to use. It just depend what’s on hand, really! Paper-wise, I use really cheap paper from Pound Land, especially the pastel colored kinds, and Paperchase. Or just scraps!

What environment do you predominantly create in? In my mind you’d draw in a cozy little nook with clouds of imagination floating above you, your creatures in your mind somersaulting and giggling manically!

What a dream! I draw predominantly in my bedroom, although I suppose I could call it my “studio” because I’m there 98.9 percent of the time. I work surrounded by lots of bits of paper, lots of postcards collected from galleries and secondhand shops, bits of work from favorite artists, zines, books, et cetera. I like to listen to music when I work. At the moment I’m listening to a lot of Robert Fripp—particularly “Evening Star,” which he did with Brian Eno, and “Requiem.”

Your Instagram features a number of vintage soft toys. Do you use these for inspiration for the characters in your work?

I try to because they’re incredibly unique themselves. I’m attracted to really weird, “ugly” stuff that no one else will buy. Sometimes it won’t be obvious to me until after I’ve drawn something that I was inspired by something close by!

I am reminded of the simplicity and playfulness of Daniel Johnston’s drawings when I see your work: You both adopt a similar naiveté and innocence. Are you commenting or referencing childhood in your works?

Ah, I love Daniel Johnston’s stuff! I’m not too sure, it’s difficult to say really. When I draw, I’m not necessarily referencing or commenting on any particular thing. My characters don’t really have an “age” attached to them because I don’t want to restrict my audience or myself too much. I guess the inner child plays a huge role in my work, and that sense of naiveté and wonder, too.

Do you keep a sketchbook? Does it go everywhere with you? What is it filled with?

Yes! I keep three currently, but the one that goes with me everywhere is the one where I draw, jot ideas and lyrics, bits of conversation—mostly to myself, ha! And then I have one to draw my comics in, and one that I use for collages, or just to stick in drawings I’ve done on scraps of paper or things like bus tickets. I don’t know what I’d do if I didn’t take my sketchbook out with me. I’d probably end up drawing on my hands or something! I think, to a certain extent, carrying my sketchbook around gives me a sense of stability when I’m out!

Have you ever exhibited your work, or do you intend to do so?

I would love to have an exhibition one day! I have loads of exhibition ideas!

Misaki Kawai is such a huge inspiration to me! I absolutely adore her work! It’s so bright and energizing to look at.

There are so many artists who have inspired me, but staple favorites include Juli Majer, Evie Cahir, Dylan Jones, Ginette Lapalme, Tove Jansson, Ernie Bushmiller and the Nancy comics, Brie Moreno, Aidan Koch, and Danny Fox. I also love David Shrigley’s work a lot, too, but the list is always expanding!

Recently I’ve also been really inspired by old toys, sunsets, odd shapes, Barbapapa, jumpsuits, knitted dolls, old computer games, and the music of Tubeway Army. The surreal and weird plays a huge role in my work, too! The best place to see what inspires me day to day is my moodboard blog.

What are your aims for your art practice and yourself?

Ideally, I’d love to be able to keep making art and eventually collaborate with people, and publishing a book would be pretty nice! I also want to keep enriching myself with knowledge and inspiration, too, and hopefully that will impact my work. I want to make more 3-D things, so that’s something I’d like to get started on. I have so many ideas for the future. It would be nice to get at least three and a half of them accomplished! Short term, I’d definitely like to get more zines out this year and get some more paintings done.

What are three words or expressions that describe your artwork?